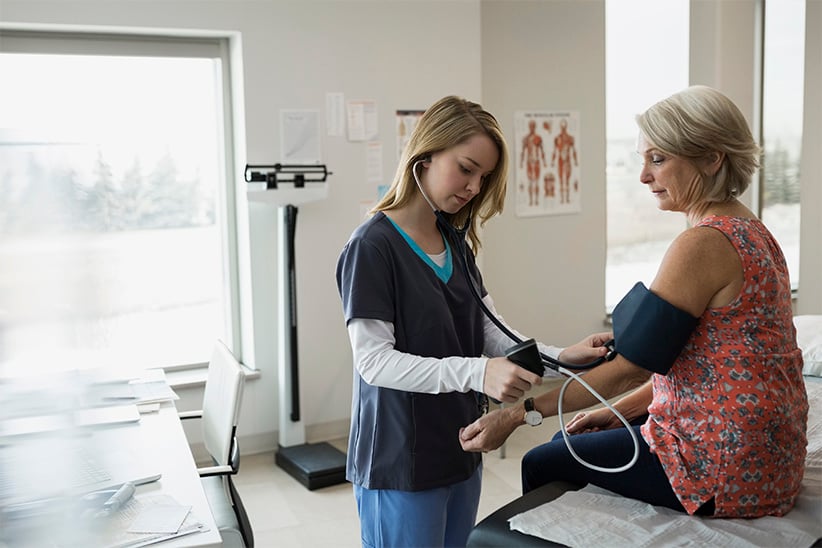 When you look at the job boards and forecasts, in almost every corner of the country—and indeed in some of the smallest, far-flung corners of Canada—nurses are in demand.

You can’t throw a stone without hitting a nursing program, whether it’s a two-year college diploma program leading to a licensed or registered practical nurse (LPN/RPN) designation, or a four-year bachelor of nursing degree at a university, which leads to a registered nurse (RN). Each province has its own names, rules and regulatory bodies, but all students have to pass a national exam before they can work.

“It’s a feast of opportunities,” says Doris Grinspun, CEO of the Registered Nurses Association of Ontario. “The field is so broad, and supplies so many different opportunities and experiences.”

There are neuroscience nurses, medical-surgical nurses, critical-care nurses, neonatal nurses and palliative care nurses. Then there is the nurse practitioner (NP), who has some of the responsibilities of a doctor, including diagnosing and providing treatment. The NP has a bachelor’s degree plus three more years of specialized education, while some RNs go on to get master’s degrees.

A nurse’s career will depend on what kind of patient they care for. “Nurses working with senior populations will have enormous opportunities,” said Anne Sutherland Boal, CEO of the Canadian Nurses Association. “Seniors are living longer, and many have health issues and chronic diseases that need to be managed, and they want to be in a community that is closer to home.”

A recent Canadian Institute for Health Information (CIHI) report found that in 2014, among those actively seeking work, only one per cent of RNs were unemployed. That’s not to say everyone’s landing their dream job right out of school; graduates have to be flexible about location and conditions of employment. In bigger cities, full-time work with regular day-time hours may be rare. According to the CIHI report, only 30 per cent of RNs in Alberta work full-time, compared to 66 per cent in Ontario.

With the wave of retiring nurses comes opportunity, and that wave may be upon us. CIHI data shows 2014 was the first year in two decades that the number of RNs declined from the previous year, to 25,397 from 27,757.

Salary depends on province, seniority, place of work, and union contracts. The minimum annual income of a supervisor in the P.E.I. Nurses Union is below $59,000, while the same nurse in Saskatchewan’s union earns a minimum of $74,000, according to a 2014 report from the Canadian Federation of Nurses Unions. A licensed practical nurse in Nova Scotia earns a minimum salary of $46,000, while an NP in the Ontario union can earn as much as $111,800.