How Queen's University prepares Olympians to compete in business 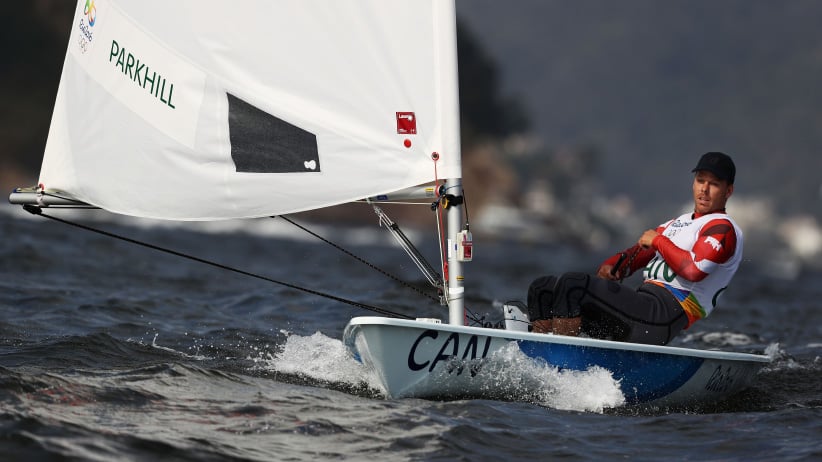 Lee Parkhill knew that the 2016 Rio Olympics would be his last time sailing for Team Canada, but he wasn’t sure what would happen next. With his daughter Emma only a couple of months old at the time, Parkhill wanted to retire from the sport. “My wife and I wanted to start our family and explore that other side of life as well. I kind of knew it was perfect timing for me to step away from sport and start my career, be home and not travel as much,” he said.

Parkhill, who competed in 2016 in the men’s Laser sailing event, started sailing competitively when he was 13 years old. He made the national team in 2009, while he was completing his bachelor’s degree in commerce at the University of Guelph. A year later, he graduated and began sailing full-time with the goal of making the Olympics.

The 28-year-old had always thought about returning to school once he retired from the sport, he just wasn’t sure how he’d accomplish it. Only a couple of months after the Rio games, he had his answer.

In November 2016, the Canadian Olympic Committee (COC) and the Smith School of Business at Queen’s University announced an eight-year partnership that will provide 1,200 former Team Canada athletes with scholarships to study at the school.

After hearing about the partnership, Parkhill quickly contacted the COC to see if he was eligible. He applied shortly thereafter. Two weeks later, he received his letter of acceptance. When he started his accelerated MBA program last January, Parkhill became one of the ﬁrst athletes to participate in the collaboration between Smith and the COC. “It was almost perfect timing for me when they announced the partnership,” he said.

Teaming with Smith is part of the COC’s work with Game Plan program. Started in 2015, Game Plan aimed to help Team Canada athletes transition away from competitive sports and map out their post-athletic careers. “I feel that we have a certain responsibility to our athletes as they transition out,” said Canadian Olympic committee CEO Chris Overholt. “They give so much to the country and they make sacriﬁces and put things in their lives on hold.”

One of the main goals of the program was to ﬁnd an academic partner. The online accessibility of business programs at Smith, along with the school’s reputation, helped set it apart, according to Overholt. “Any time our athletes can have access to services when they’re travelling around the world, that’s a huge win for us,” he said.

Parkhill, who lives in Oakville, Ont., travels to a Queen’s facility in Mississauga every other weekend to participate in video lectures with the 122 other students in his program, who are logging in from various locations across the country.

While the majority of the work is done in this online format, students in Parkhill’s program also have to spend four scheduled weeks on campus in Kingston during the year-long program.

Athletes who apply for this program have the choice of completing their full-time or executive MBA, master’s programs in management analytics, entrepreneurship and innovation, or graduate diplomas and certiﬁcates in business.

As part of the arrangement, Smith will also provide enhanced leadership training for COC staff and other sporting community members.

“We thought we could make a huge difference,” said Elspeth Murray, associate dean at the Smith School of Business. “These athletes put their careers on hold to go and do great things for Canada. And then one day it’s sort of over, and then the question is, ‘What next?’ ”

Though Parkhill still isn’t completely sure what his career will look like in the long term, his time at Queen’s has provided him with some clarity following his retirement from sailing. He will ﬁnish his MBA this January while also working at RBC as a member of their technology infrastructure ﬁnance team. He sought out that job because students in his program are expected to work full-time for its duration, and he expects to stay with the bank after graduation.

In the future, Parkhill believes the Smith partnership and the Game Plan program will not only beneﬁt retiring athletes like him, but also those in the prime of their athletic careers.

“The world of sport is so competitive that if you’re going to compete for Canada and go to the Olympics, you have to be a full-time athlete and essentially put everything else on hold,” Parkhill said. “So [the partnership] is going to help the entire Olympic national team movement in Canada, knowing that [athletes] have this support and network set up.”