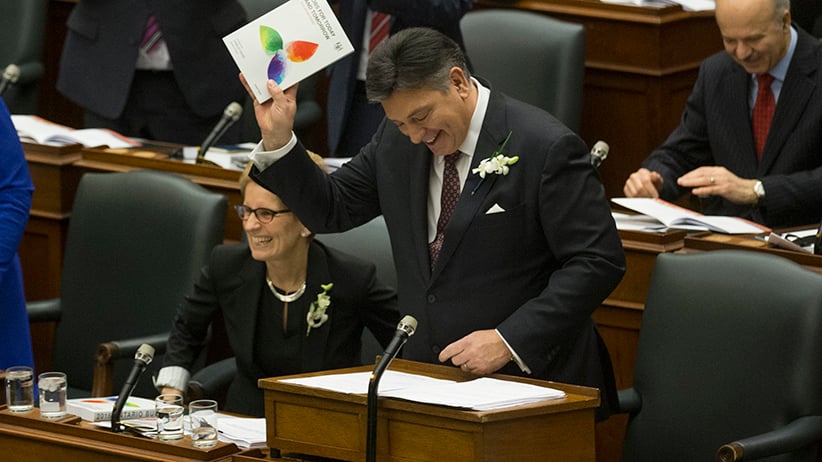 Minister of Finance Charles Sousa (right) shows off the budget to the Opposition benches as Premier Kathleen Wynne looks over the aisle. (Rick Madonik/Toronto Star/Getty Images)

Yesterday the Ontario government claimed that most students from families making under $50,000 will be able to attend college or university for free in 2017. So far the response has been overwhelmingly positive, with university administrators, faculty associations and student groups all welcoming the changes.

There’s just one problem: the numbers don’t add up.

It’s the same story for colleges. Ontario’s math requires college tuition to be $2,768. According to Colleges Ontario, while average tuition is $2,400 for diploma programs, it’s $3,600 for graduate certificate programs, $5,000 for collaborative programs and $6,100 for bachelor’s programs.

Minister for Training Colleges and Universities Reza Moridi has an explanation for the discrepancy: Ontario doesn’t count more expensive programs when determining its average. For colleges the government only counts diploma programs. For universities the government only counts tuition fees in arts and science programs, leaving out the more costly tuition fees in professional programs such as engineering.

“Engineering students have to pay a little more. Arts and science students, it will be completely free for them,” says Moridi. Moridi defended the use of the lower figures by saying: “They have to use a figure, so that’s the figure they have been using in the ministry.”

Moridi argues the underlying goal—to get more low-income students to graduate from post-secondary institutions—is noble. As he put it: “This is a major milestone. Yesterday was the best day in my life as a politician.”

In 2012, the provincial Liberals promised a 30-per-cent reduction in tuition. After an initial flurry of positive media coverage, the Liberals came under fire for eliminating grants that helped vulnerable students instead of allocating new money to pay for the 30-per-cent reduction. Similarly, Moridi explains that this program will be paid for by consolidating existing student aid programs.

This time, though, student groups are welcoming the changes. Raejan Hoilett, chair of the Canadian Federation of Students-Ontario, is pleased that the government is consolidating the many current student aid programs into one. “Having one application will really simplify things and reduce one more barrier for students from a low socio-economic background who are already facing so many struggles,” says Hoilett.

Hoilett’s concerns are about the fine print: “Undergraduate students actually paid $7,868 last year and graduate students paid $8,971. This is an amazing step forward and it will help a lot of students in need but $6,160 is not the real cost of education.”

Hoilett argues that for low-income students, a $1,700 gap can make a huge difference. He also thinks that solely counting tuition fees doesn’t reflect the real cost to students.

“None of these estimates include mandatory student fees, which are often over $1,000,” says Hoilett. For example, students at Guelph University paid $1,163.59 in mandatory fees this year. It’s a similar story for college students, who can expect to pay about $800 in mandatory fees.

Spencer Nestico-Semianiw, president of the Ontario Undergraduate Student Alliance, shares similar concerns: “Overall, I think these changes are worth celebrating, but the way they count tuition and the way they don’t include student fees creates this impression that there won’t be any cost to low income families, and that’s not true.”