Productions like War Horse and Avenue Q have revived interest in puppetry, which lives somewhere between theatre and art 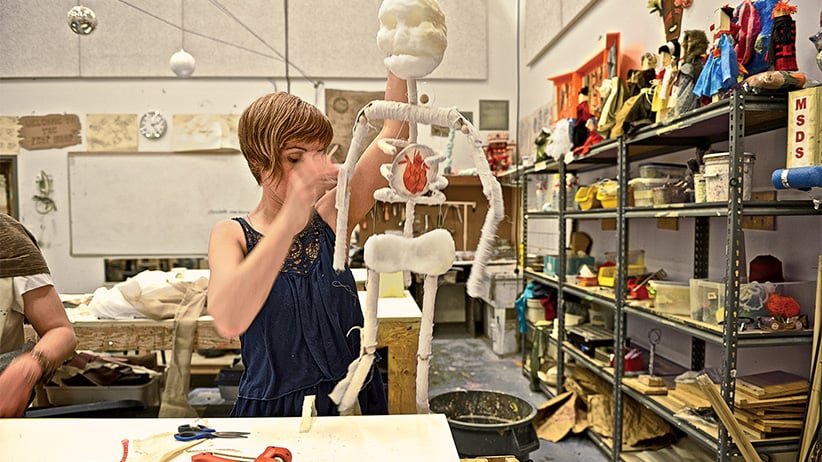 Shawna Reiter sits a heavy wooden puppet on the table, its feet clicking on the surface. Saija is an old woman with wispy white hair, deep wrinkles and a pair of penetrating blue eyes.

With one hand, Reiter moves the puppet’s head back and forth; with the other, she controls the arms and legs, shakily walking the puppet across the table. “Breath and movement are very connected,” she says, explaining how she matches the puppet’s breath to her own. “Puppets are just empty vessels until you put something in them.”

If she makes the puppet’s movements as natural as possible, she can suspend disbelief in an audience, allowing full immersion in the play. “It’s a reciprocal connection between yourself as a puppeteer, the audience and the puppet,” she explains. “It’s kind of magic in a way.”

Reiter is coordinator for the Humber College Puppetry Intensive, a two-week crash course held each summer, one of a handful of programs across the country where you can learn the craft of making and performing with marionettes. In Canada, Montreal has been a hub of puppetry for decades, with its annual Festival de Casteliers attracting international troupes, while the Université de Québec á Montreal offers a two-year postgraduate program in puppetry that accepts 15 students every two years.

Unsurprisingly, puppetry has a tradition in France, where the World Puppet Theatre Festival is held every two years in Charleville-Mézières, home to the International Institute of Marionettes, though it has a long history dating back to Ancient Greece and has been present in almost every civilization.v

With theatrical productions like War Horse, The Lion King, Avenue Q and the latest Cirque du Soleil show, Luzia, reviving the art, Reiter says puppetry is having a renaissance. “It continually evolves, but it has a history of living on the edges,” explains Reiter, who’s also co-founder and artistic director of Clunk Puppet Lab in Toronto.

And yes, it is possible to make a living from puppets. Ronnie Burkett began touring Alberta at 14 and has won a string of awards, including an Emmy and two Doras, in more than three decades of making marionettes and performing characters. In Calgary, Peter Balkwill helped found the Old Trout Puppet Workshop on a ranch in the winter of 1999, amid sleet, snow and the threat of Y2K. Balkwill and his friends—who met a decade earlier as camp counsellors—formed the troupe as a “haphazard bohemian attempt to skirt adulthood.” They’ve toured North America and Europe and offer a two-week intensive through the Banff Centre, though they want to create a professional program through the University of Calgary.

Some actors take workshops to incorporate puppetry into their own theatre practices, some need training after getting jobs on children’s television shows like TVO Kids’ Hi Opie! and others come to build a foundation for their own companies—like Nikki Shaffeeullah and Sasha Tate-Howarth, who formed Sea Lettuce Arts, a Toronto troupe that tackles social issues.

Balkwill says the Old Trout founders have backgrounds in theatre, philosophy and sculpture, while Reiter took a puppetry workshop with Old Trout following her master’s in fine arts at the University of Calgary. “Puppetry embraces every media,” says Balkwill. “It is the true interdisciplinary art.”

Nearly eight years later, Reiter teaches at Humber alongside two of the most experienced puppeteers in Toronto, Ann and David Powell, a brother and sister duo who founded Puppetmongers Theatre in 1974.

When the Powells aren’t teaching, they work in their studio inside an old munitions factory, filled with shelves of puppetry paraphernalia. There, Ann pulls out a marionette with a sullen face and a floppy grey hat from a hockey bag. “He’s had a few minor surgeries,” she says of the main character in a show they put on in Iran in 1976. In 2004, they returned to the country to stage Walidad the Grass Cutter, a retelling of a popular folk tale. “There were adults in the audience in tears,” says Ann. “It was their childhood before the Revolution.”

Ann then grabs a Cinderella puppet from the bag. She flips it over and pulls its raggedy skirt over its head, revealing an evening gown. “Topsy-turvy doll,” she says, explaining how they quickly made the transition from day to night. “Simple tricks.”