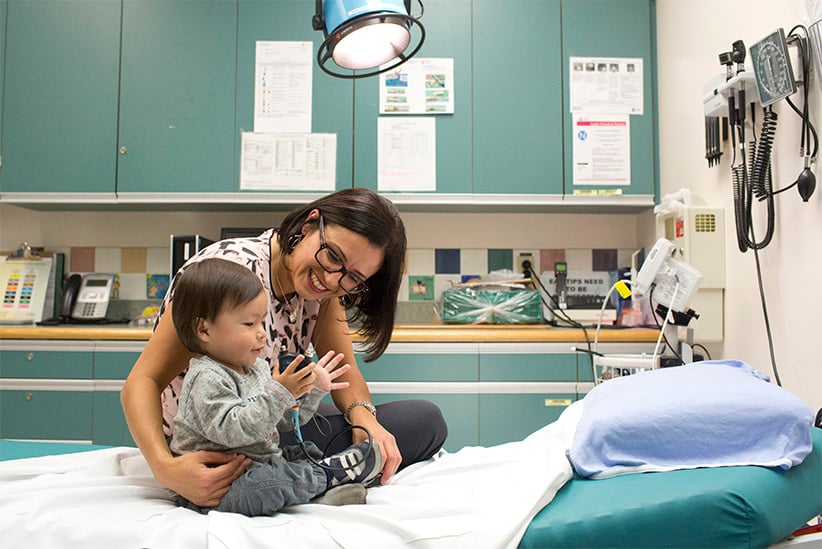 For Jessica Dunkley, getting into medical school was no ordinary childhood dream. Deaf since the day she was born, Dunkley aspired to become a doctor when, at age 10, her aunt gave her a plastic human anatomy model with removable organs.

She didn’t think it was possible until, in her mid-20s, she happened to read about deaf doctors practising in the United States. “I realized the opportunity was out there,” and she became “determined to do medicine.” Dunkley applied to numerous medical schools and, in 2010, completed the undergraduate program at the University of Ottawa, where a sign language interpreter accompanied her to class and clinical sessions. Today, Dunkley is finishing her second year of residency in public health and family medicine at the University of Alberta—making her one of the first deaf doctors in Canada.

Dunkley’s accomplishment represents the latest diversification of medicine, which was first practised mostly by white male doctors, and has since flourished with the inclusion of women and people of different races and ethnicities. Now the profession is set to expand again, as students with disabilities—including limited mobility or dexterity, hearing or vision loss, learning or developmental disorders, and psychological or mental health issues—are increasingly being accepted and supported at medical schools.

Like Dunkley, a handful of other young Canadians are making history by becoming doctors with disabilities: Megan Jack, who is also deaf, graduated from the University of Manitoba in 2013, and is now a family physician. Janel Nadeau had a stroke at 19, which partially paralyzed her and has affected her memory; she is finishing her training as a neurologist at the University of Calgary. Steven Daniel was paralyzed from the waist down during a paratrooping accident while serving in the military; although he is in a wheelchair, Daniel is training to be a family doctor at the Northern Ontario School of Medicine.

Part of what makes Dunkley’s experience so remarkable is the legal precedent she’s established along the way. In late June, she won a human-rights case against the University of British Columbia, which failed to provide her with a sign language interpreter in 2010, when Dunkley was supposed to start her residency. (She was later accepted at the University of Alberta, which provides interpreters.) Dunkley says the discrimination “came as a shock,” but she was not deterred. This ruling means others won’t be, either. “I just knew I didn’t want the next person to go through this,” says Dunkley. “I’m pleased it [will] improve accessibility.”

While disabled doctors have always practised—in 2011, there were approximately 9,000 working, according to Statistics Canada—most of them became disabled after their education and training. What’s different “is the entry point,” says Melanie Lewis, associate dean of learner wellness and advocacy at the University of Alberta’s faculty of medicine and dentistry. “You have medical students presenting with disability.”

Over the last five years, there has been “a big tipping point” at medical schools toward “embracing the possibility of accommodation and looking at what we can do [for disabled students], rather than dismissing that it’s a possibility,” says Lewis, whose office supports students such as Dunkley with a range of conditions, including sleep disorders, depression, epilepsy and multiple sclerosis. “We’re recognizing that medicine needs to attract people [who] represent the diversity in society in order to provide good care.”

That’s forced universities and students to get creative. Dunkley has had to invent sign language for medical terms. She uses a digital stethoscope or portable ultrasound machine to check a patient’s heart. In the operating room, colleagues wear clear surgical hoods rather than paper face masks so she can lip-read. Daniel has used a “stand up” wheelchair, which allows him to be positioned upright at a patient’s bedside during surgery or in the emergency room. He gets help “scrubbing in,” and his colleagues position his wheelchair at the operating table.

Universities must identify the needs of students and residents, figure out how to meet their needs on campus and inside hospitals, then determine “who is going to pay,” says Geneviève Moineau, who was undergraduate dean at the University of Ottawa when Dunkley was a student. Since then, accommodation is “a topic that has become more important within our faculties,” says Moineau, now president of the Association of Faculties of Medicine of Canada.

Part of the conversation is about how impairment can actually facilitate better doctor-patient relationships: A disabled doctor may empathize more with patients, who, in turn, may relate to or trust a disabled doctor more because they feel understood. Dunkley has experienced this first-hand. “People come in and they are frustrated or going through a painful experience, and they feel they are the only one,” she says, “and then they [see] me and it just [gives] them a better perspective.”

What’s more, disabled doctors have all been patients, so they understand personally how a doctor’s disposition and bedside manner can affect someone. While Nadeau was recovering from her stroke, she saw “the whole spectrum of doctors,” and that’s partly what motivated her to pursue medicine. “I was determined to add to the good ones.”

While disabled doctors may be better equipped to bond with patients, it can also alienate them from other physicians. “You can sense this uncertainty or questioning about how you are going to be able to do it,” says Dunkley. This can be especially challenging during medical training, when students and residents move between different hospitals and clinics for brief rotations. “The most problematic people are usually [those] who do not work with me directly, and they have assumptions.”

That medical students and residents face stigma because of a health condition is ironic—but not so surprising. “There’s some deep psychological theory around how doctors in general may not necessarily accept their mortality,” says Vera Krejcik, president of the Canadian Association of Physicians with Disabilities. “A lot of people have noticed a certain discomfort; colleagues don’t know how to negotiate being with somebody with a difference.”

Krejcik had a stroke while studying medicine at the University of Calgary. With limited use of one arm, she switched her focus from internal medicine to psychiatry. It was a matter of being “realistic,” says Krejcik. “I don’t worry about hobbling around or needing to suture.”

Before anyone can become a doctor, there are technical standards they must meet, both physical and cognitive, says Lewis, who helped Dunkley establish herself as a resident at the University of Alberta. But there are intangibles to consider, too. Dunkley and others are proving that. As Lewis puts it, “Any candidate who comes from an extraordinary background with a unique perspective, they often do make extraordinary physicians.”