By studying criminology together, convicts and students discover they can be colleagues—even friends 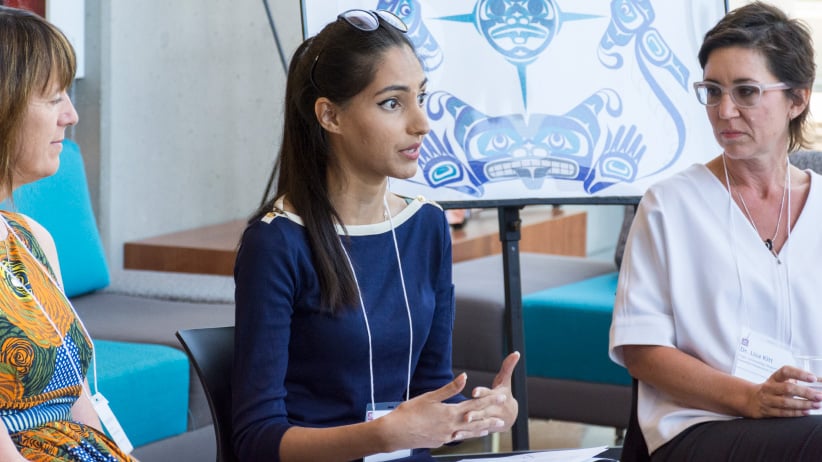 Left: Dr. Diane Purvery, Centre: one of the outside students, Sujata Bakshi, and her criminology instructor Dr. Lisa Kitt (right). The artwork in the background was drawn free-hand by one of the inside students as part of the program. (Kwantlen Polytechnic University)

Twice a month, from late winter through spring, a caravan of vehicles heads east on a 140-km drive from the Surrey, B.C., campus of Kwantlen Polytechnic University (KPU) to the Kwìkwèxwelhp Healing Village in Harrison Mills. Carrying 13 or 14 criminology students, the cars and SUVs tackle a steep and gravelly mountain road as they near their destination.

To the eyes of Sujata Bakshi, Kwìkwèxwelhp (pronounced Kwee-kwee-kwelp) doesn’t much resemble what it is—a prison. The minimum-security institution is run by Corrections Canada, but has been moulded by an Indigenous ethos of healing justice. “It’s surrounded by nature,” says Bakshi, 25, who is transitioning into fourth-year criminology at KPU. “There are no walls. The incarcerated people are not referred to as inmates. They are referred to as residents. They are not wearing any uniforms. It’s really different from what you think a typical prison should be.”

Once inside, the KPU students have to pass their bags through scanners on occasion, but usually they just sign in and head to the large, airy visiting room with ceiling-high, unbarred windows. Joining them there, seated in a circle of chairs, is an equal number of inmates.

KPU’s Inside-Out Prisoner Exchange Program, which has “outside” KPU students studying criminology side-by-side with “inside” students serving time—was novel in Canada when the university first offered it in 2011. It follows a model established in 1997 by Temple University criminal justice professor Lori Pompa in the Philadelphia prison system, and was later brought to Canada by Wade Deisman, associate dean of arts at KPU.

Since the program’s start at Temple University two decades ago, more than 1,500 Inside-Out courses have been offered at prisons around the world. And yet convincing Canadian educators and correctional authorities to blend students and law-breakers together into one class was “a fairly formidable challenge,” says Deisman. At a time when conservative governments were pushing a “doctrine of maximum severity” when it came to rehabilitating offenders, Inside-Out had to fight an uphill battle. Objectors argued there was too much risk for the college students, or the program was unmanageable for prison authorities. “But because we had the Temple model to refer to and their track record of high success, I think that helped convince the educators who might have been dubious,” says Deisman. “The much more difficult challenge we had was getting the correctional officials to agree and to be supportive of the initiative. We had real trouble finding a home for this program.”

The course was offered at Matsqui, a federal medium-security prison in Abbotsford, B.C., for a short time, but authorities there chose not to continue it. Then the program found Kwìkwèxwelhp. Originally known as the Elbow Lake Institution, the local Sts’ailes First Nation renamed and reopened the facility in 2001, changing it from a traditional prison to a 50-resident facility imbued with an Indigenous approach to healing the spirit. When KPU presented Inside-Out to the local community, says Deisman, “it was really received positively.” KPU now considers Kwìkwèxwelhp a “life partner” for Inside-Out, and is looking to expand its courses beyond criminology to other subjects, such as creative writing.

Before they participate in Inside-Out, says Deisman, many KPU students have “boilerplate” stereotypes in their minds of what a criminal looks like. “Criminal is a master status category, which sweeps everything aside,” sighs Deisman. But once inside “Kwee,” as the KPU students call it, both they and residents discover “a kind of common humanity,” she says. “I know that sounds touchy-feely, or cheesy. But, believe me, when you are there, nothing could be further from the truth. It’s sometimes jarring. But it’s so powerful that the effects are undeniable.”

Sujata Bakshi, who was part of the program from last January through April, says there was nervousness but little or no fear among her group of fellow “outside” students about meeting their new “inside” counterparts. When the KPU students first arrived, they were welcomed by elders with the same blanket ceremony that greets arriving inmates. “The blanket ceremony is so beautiful,” she says. “The elders wrap [new arrivals] in a blanket to tell them they are safe.”

The KPU students “adjusted quite quickly” to their new study space, she says. “And the students on the inside made it a point to help create this safe environment for us. So safety wasn’t really much of a concern.”

Bakshi had been a science student when she took a couple of criminology courses at Kwantlen and fell in love with the subject. But as she sought her criminology degree, she began to think critically about criminal justice issues. “I realized how small and powerless I was to make any changes,” she says. “No one would take me seriously because I didn’t have any practical experience in the field.” Inside-Out gave her some of that experience.

But the criminology students were not at Kwìkwèxwelhp to study the criminal mind, as it were. The program—which offers a credit that both outside and inside students can use toward criminology degrees—focused on trauma and healing during Bakshi’s session.

For the outsiders, sitting in that circle of chairs and sharing discussions and stories about the traumas that had derailed the lives of the Kwìkwèxwelhp residents, the experience was raw and eye-opening. “I’d be in tears but in a good way,” notes Bakshi. Encouraged by the brave openness of the inside students, she began digging into her own difficult experiences. Though she sometimes found herself sobbing deeply, she felt herself somehow liberated at Kwìkwèxwelhp.

“We all really loved going there. It was such a phenomenal experience for us. It was a six-hour class and . . . those six hours would go by so fast because everyone just connected with each other so well.”