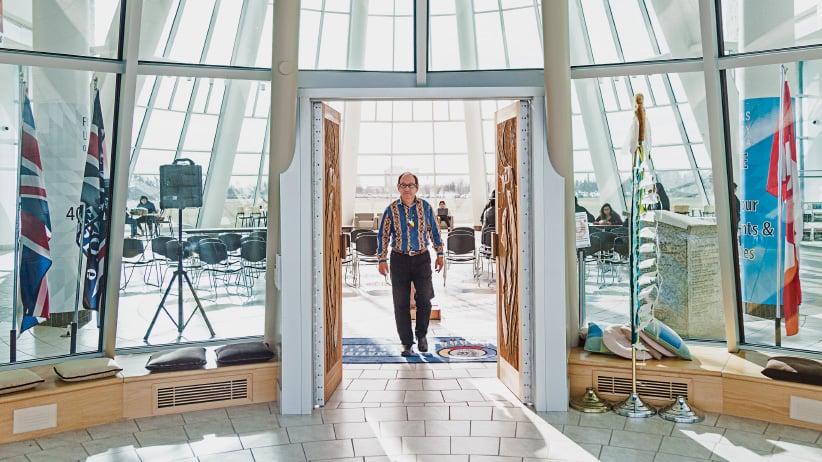 The curriculum at First Nations University has always had a strong focus on reconciliation. But after the Truth and Reconciliation Commission released their Calls to Action in 2015, the school decided to create a new certificate to underscore their work on the subject.

“What this certificate really embodies is the formalization of our involvement in an area where we’ve been involved for a long time already,” says First Nations University (FNU) associate vice-president academic Bob Kayseas.

The certificate in reconciliation studies was officially added in January with the goal of recognizing the shared history of Indigenous and non-Indigenous peoples, while promoting healing, equity and respect for Indigenous cultures and values in Canadian society. Students taking part in the program have four mandatory courses, then select two of six elective courses to meet the certificate’s requirements.

Only two of those 10 courses are new offerings at FNU, officially a University of Regina college, according to Kayseas. Most of the other courses were just modified to fit the reconciliation studies curriculum.

The certificate can be completed face-to-face at one of FNU’s three campuses across Saskatchewan, or online for those who can’t reach the campus or aren’t enrolled at the school. “We created this [certificate] with an eye to making this a nationally accessible program,” says Andrew Miller, an assistant professor who helped identify courses at the school to add to the certificate’s curriculum. “There are options that make this suitable for people who are not enrolled in First Nations University as degree seekers.”

While current FNU students can take the certificate’s required courses in line with their electives, Kayseas believes the program is also well-suited to non-students. “I think that there’s opportunity for this program to be offered to somebody who wants to enhance their own understanding and knowledge about this area,” he said. “It could add something to the tools of professionals already working.”

Blair Stonechild, a professor of Indigenous studies at FNU, helped create the certificate and teaches a required course on the history of residential schools. Stonechild, who spent the first nine years of his education at the Qu’appelle Indian Residential School in Lebret, Sask., says his course gives students an opportunity to gain in-depth knowledge of the history of residential schools. “They say that residential schools were one of the most aggressive forms of what they call forcible assimilation or cultural genocide,” he says. “So I think it’s important that people understand not only what happened, but why that happened.”

Stonechild was the university’s first faculty member when he was hired in 1976. “We feel that Indigenous culture has a lot to offer, and Indigenous knowledge has a lot to offer, which people still don’t really recognize fully,” he says. “We feel that we need to offer this intellectual and cultural heritage not only for our own people, but for other people as well who wish to access it.”

According to Miller, the program equips students to become leaders in various aspects of the reconciliation process. “We’re offering this course to future social workers, future educators. By taking this course, people will be prepared to enter government within their own bands and in provincial and national politics. So we’re hoping that by creating greater understanding, people are prepared to lead with a fuller understanding of what’s at stake and how we can respectfully work together to find solutions,” he says.

FNU is the first school in the country to create a certificate that specifically covers reconciliation, but Kayseas hopes that other institutions will soon follow suit and offer similar programs themselves. “I think it’s something that’s needed all over,” Kayseas says. “There’s a really big need across the country for more education, just so that there’s a greater understanding of contemporary issues concerning Indigenous people in Canada.”