Preparing for our automated, robotic future at Conestoga College 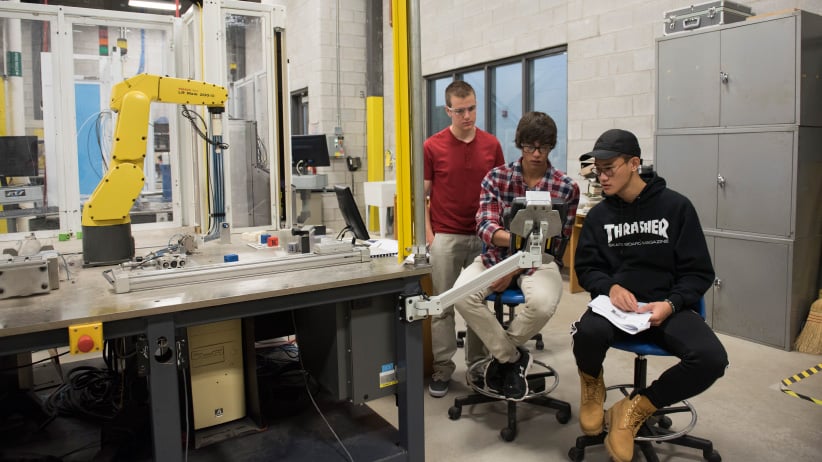 After graduating from a two-year electrical engineering program, Ben Adams was keen on getting into the workforce. But with no apprenticeship experience, employers weren’t calling him. After months of fruitless job-hunting, he decided to go back to college: this time to get an advanced diploma in mechanical engineering robotics and automation at Conestoga College in Kitchener, Ont.

By his ﬁnal semester in the three-year program, Adams had three work terms under his belt, along with copious and varied hands-on experience. He also had two job offers to choose from.

“Employers love our grads,” says John Tielemans, program coordinator and instructor. “The lowest graduate placement I’ve seen in the 19 years I’ve been here is 90 per cent, and that’s with some major economic downturns.” In a typical year, the employment rate for graduates six months out of college is between 95 and 100 per cent. And most students have a job offer—sometimes multiple offers—before graduation.

Tielemans credits the program’s co-op legacy for the high placement rates. The program, which has been around for 25 years, was one of the ﬁrst college programs in Canada to offer a chance for work placements. That history means it’s one of the ﬁrst places employers recruit from for their robotics and automation needs. At Ramp Manufacturing—a Waterloo, Ont.-based company that builds custom automation machines for clients—there are four Conestoga grads in the controls department alone, including Adams.

“I often have companies calling me asking if we have anyone who can help them with their automation,” says Tielemans. “I tell them we do—if you can get at them fast enough.”

It doesn’t hurt that more and more industries are moving toward automation. As they do, it seems likely that demand for the folks who build and maintain that automation will also grow. When asked why he chose the robotics and automation program at Conestoga, one of Tielemans’s students replied: “I didn’t think there’d be fewer robots in the future.”

Of course, the school doesn’t just count on a tight labour market to get its grads employed. Its students are meticulously trained, spending most of their time in labs and workshops designing, building and programming robots. This training culminates in a third-year project that follows a unique model. The class splits into groups of about four students, and each group spends a month conceptualizing and planning an automation project. The class then votes, and builds the three projects with the most support together.

Industry representatives often show interest—and sometimes get involved—in these ﬁnal projects. Adams’s group, for example, developed a rivet feed system for auto parts as a proof of concept for a company that makes and supplies parts to large carmakers. “We worked back and forth with them, communicating on what we were thinking, how we planned to build it,” Adams explains. “Then they’d take those ideas and build their own machine.”

For students concerned about limiting their options with a college diploma versus a university degree, Conestoga grads can do another two years at an associated university (or at Conestoga itself) to get a bachelor of engineering degree—that is, if they aren’t lured into the workforce by a stable, high-paying job. “The money is so good for most of them,” says Tielemans, “they often decide to work instead.”