Could the school year be over because of coronavirus?

Parents, teachers and students are considering the possibility that class is out for the year. But that doesn't mean the kids have to stop learning. 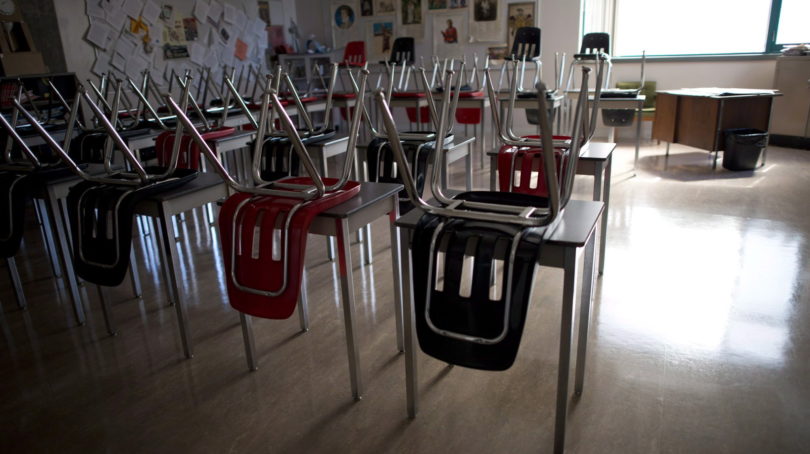 Until Sunday afternoon, Alberta was one of the few parts of coronavirus-stricken Canada where kids were supposed to go back to school this week as normal, without mandated closures or March break on the horizon.

The provincial daily briefing changed that, jarringly. The premier, education minister and chief medical officer of health didn’t merely match others by closing schools for a week or two alongside March break.

In Alberta, classes were dismissed indefinitely. Until September, it now seems likely. Provincial assessment tests, which take place in May and June, have been cancelled. Grade 12 students will take diploma exams (somehow), and graduate if eligible. “We expect every student to receive a final mark, and that students will progress to their next grade level next year,” Education Minister Adriana LaGrange told a news conference, her gaze clearly focused on some point beyond the next few weeks.

READ MORE: Office workers want a return to the cubicle

Saskatchewan followed suit with similar language about indefinite school closures, then British Columbia on Tuesday. Given how it’s going with this pandemic response, where the first jurisdiction’s aggressive social-distancing measures set a standard others follow, don’t be surprised if other provinces shutter schools long-term, despite their tentative, publicly stated plans to return by March 30 (Québec) and April 6 (Ontario).

This means children might face losing nearly one-third of a school year—with all the child-care complications, social disruption and curriculum gaps that may entail. Alberta is working on online learning modules, but much is unknown about how those will come together, if teachers who are currently still coming to work are forced to stay home, too.

“It’s not that they will not acquire a skill. They will miss a very important experience,” says Marina Milner-Bolotin, an associate professor of curriculum and pedagogy at University of British Columbia. “Imagine for two [additional] months they don’t have routine, they don’t read, they don’t study.” She likens it to skipping the gym for a long spell and getting out of shape.

Dr. Deena Hinshaw, Alberta’s top public-health physician, had earlier said she was reluctant to close schools, because her read on pandemic management indicated that effective closures needed to be eight to 12 weeks long—a big pill for politicians and society to swallow.

“This pandemic will not end in a matter of weeks and there won’t be a clear opportunity to reopen schools, likely not until September at the earliest,” she said on Saturday, one day before the province made its call.

In the United States, more than three dozen states have closed schools, some into mid- or late-April. But the federal Centers for Disease Control (CDC) are recommending no group gatherings of 50 or more people for eight weeks; if states follow that timeline, the impact carries into mid-May. Some state officials have suggested this could spell an end to the academic year.

In China, schools in most regions remain closed despite the disease receding in the country. Some in less-affected provinces have reopened after an extended Lunar Year break; but students were greeted by strict distancing measures and regular temperature-taking. And that’s the exception in the region. Hong Kong has relatively been spared—157 coronavirus cases and four deaths—yet classes that have been cancelled since early February won’t reopen until April 20 at the earliest. In Europe, Germany’s schools won’t return until at least April 20; France, which is on virtual lockdown closed them until further notice.

Alberta, though, seems to be one of the first jurisdictions worldwide to reckon with an end to the school year. The province has experience on this front, thanks to natural disasters. When floods hit Calgary and nearby towns in late June 2013, Alberta Education exempted high school students from diploma exams. The Fort McMurray wildfire of May 2016 cut off the final two months of that school year; students advanced to the next grades in September, as normal. Though so little else was normal.

RELATED: Should you shame friends into cancelling their vacations? (And 17 other urgent questions)

Fort Mac’s case is no easy comparison to the pandemic’s potential toll on students: hundreds of families were traumatized by losing homes to fire, the whole city faced a monthlong evacuation, many students joined schools elsewhere in Alberta; and when teachers returned in the fall, much of the smoke-damaged technology hadn’t yet been replaced, says Shannon Noble, the public school district’s assistant superintendent. Add that to the mental health challenges faced by staff and pupils, and they really didn’t start making up for lost academic time until after Christmas of that year.

“In our high school kids, the gap was a little tougher to close, but two years out from the fire, our results were the same or stronger,” Noble says.

Some post-wildfire experiences will be similar to the pandemic, if the school year’s over. Graduating high-schoolers lose the chance to be together for the last set of June goodbyes, as well as prom—that teenage rite that’s the utter opposite of social distancing. Fort McMurray high schools reunited their grads in August for a dance formal.

While classes may not resume until September in parts of Canada, that doesn’t have to mean the remainder of the school year is lost, UBC’s Milner-Bolotin says. Students should be learning online, and teachers—who are remaining on the job in indefinitely closed Alberta schools—should embrace the technology as well, she says. There are plenty of language, math and science lessons available all around the Internet. Alberta and Ontario are among jurisdictions working to add online modules; Fort McMurray schools are ensuring there will be services for special needs students, and printed lesson materials to pick up for families without broadband or computer access. (Scholastic has joined in, offering downloadable daily courses for various grade levels.)

Milner-Bolotin, who helps organize science outreach programs from the Vancouver university, sent a list of resources to the 800 families she has on her contact list. “It has to be established as a routine,” she says. “The child has to know that I have to study today for two hours, three hours, whatever it is.” Of course, not all parents will be able to convert so easily to temporary homeschoolers; those working have inherited child-care challenges from the closure of schools and daycares.

Whenever school does resume, the return to the class day’s routine won’t be the only adjustment at schools, Milner-Bolotin predicts. There will be emotional impact after weeks of worrying; of being largely housebound; of losing sports and other organized activities; of bearing witness to panic in their typically even-keeled elders. “Of course, kids are not sheltered,” she says. “They can see parents carrying all that toilet paper.”