Schools are teaching values. But whose values?

Critics worry about all the time teachers are spending on morals instead of math, and on gratitude instead of grammar 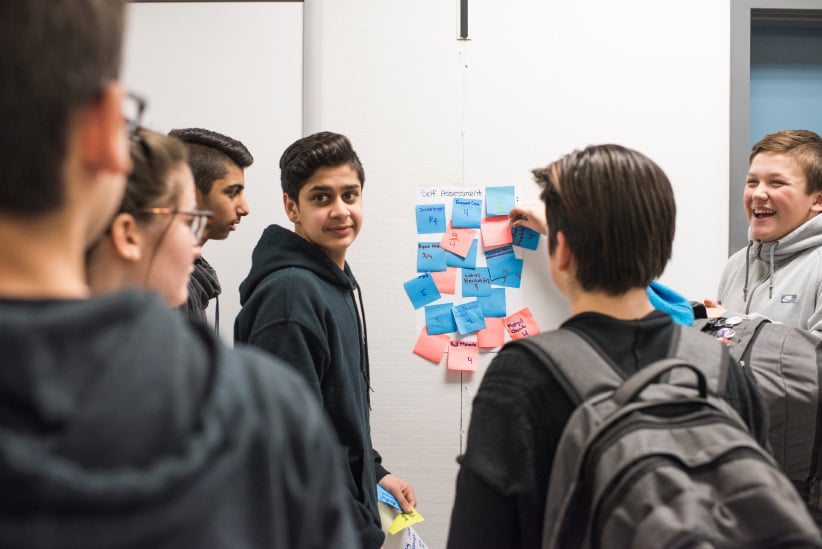 At W.J. Mouat Secondary School in Abbotsford, B.C., “character class” is mandatory. Its teacher, Lisa Marie Fraser, spends 120 hours a year on units called caring, respect, responsibility, teamwork, awareness and integrity, dissecting each and devising community service projects. There’s a lot of “thinking about thinking”—one of the course’s goals—as students work through the material. Fraser grades students according to their reflections on their thoughts; as the capstone project, they review their reflections and contemplate any changes in their attitudes.

“I’m 100 per cent convinced this is something that needs to be here,” says Fraser, who also teaches English and drama. “When you get kids in Grade 9, they don’t even know what a value is. They say, ‘I value my cellphone, I value my Nintendo’ … They’re learning pretty cool stuff.”

While politicians talk about screening immigrants for Canadian values, schools in every western province and Ontario are already teaching them to students. Whether using the terms “values,” “traits” or “attributes,” or emphasizing the importance of perseverance, lovingness or grit, schools are teaching what children were once expected to learn through churches and nuclear families. To test if these curricula are working, and to show children where they need to improve, schools between Ontario and B.C. are administering an annual survey to 7,000 students to measure their character.

Some parents are perturbed. They ask whose values are being taught and how much time teachers are spending on morals instead of math, and on gratitude instead of grammar. Critics wonder if character is even teachable, let alone measurable. And as universities and employers in some places begin paying attention to character scores, critics warn that will only add stress for children who already deal with sometimes dangerous amounts of pressure.

When W.J. Mouat introduced the Living and Learning with Character course in 2010, Fraser would interrupt math, science and language classes to teach the course to Grade 9 and 10 students once a week. Now, the school has introduced “flex time,” giving students a 40-minute block of free time every day. Each week, one of these is spent learning character.

The course aims to create helpful citizens. One class decided to plan fundraisers for refugees and create swag bags for new students. “I thought it was friggin’ awesome,” says Madison Hendry, who graduated last spring and is now in the pre-nursing program at Douglas College in New Westminster, B.C. “Personally, I really liked it,” echoes her classmate Salar Jabari, who now studies engineering at Concordia University in Montreal.

MORE: Is high school curiosity a measure of university success?

Yet some students resent all the reflection, which they see as wishy-washy. They must write, for example, about genuine caring versus material gift-giving and watch theoretical videos. “You’d have to complete these really, really pointless assignments of how you did this and that in the community,” says Jabari. “They force you to make something up … and it didn’t make me feel like a better person. Sometimes they try to shove it down your throat, and that’s not how you should learn.”

Skeptical teachers, however, have come on board as the character curriculum shifts toward hands-on projects. “It’s like the best thing that I think could’ve happened,” says Karen Bowater, a math teacher at W.J. Mouat. “It’s part of what I think should be happening everywhere.”

It is. British Columbia’s Ministry of Education now includes character-building in curriculum beginning in kindergarten. School boards in Alberta and Saskatchewan have published kits to help schools encourage courage, decency, civility and other traits. And the Ontario government has requested that schools “embed character development in all subject areas.”

The movement began in Greater Toronto’s York Region in 1999, when school counsellor Avis Glaze watched news of the shooting of a student in Taber, Alta., and of the near-fatal beating of local high school student Jonathan Wamback. “We must do something now,” Glaze remembers declaring. Today, Ontario schools, including 110 Catholic institutions, have given out 1,350 character awards and assigned attributes to each month (October is inclusiveness; November, empathy.)

Preachers, not teachers, were the original guides of character, along with family members. Educators who support the teaching of values say children are spending less time with family and are instead poring over raunchy music videos and playing violent games. “It would be too dangerous to our society not to have it [taught] more pervasively,” says Glaze.

Not all parents are convinced. “There’s a tendency to see it as airy-fairy, New Agey BS,” says Yuki Hayashi, the mother of a student entering Grade 9 in Hamilton. “My concern would be, how much time is spent on this?” Yet, Hayashi agrees that schools should teach everyday skills and are trying to “mould citizens that we want to live next to.” Of course, not everyone agrees on the definition of a model citizen. One father told Glaze he didn’t want his son being taught to be honest because it would compromise his future as a businessman. “As a society,” counters Glaze, “we must have a few attributes that are non-negotiable.”

While Fraser believes she can teach character, she isn’t convinced she can measure the success of that mission. She often gives grades of 100 per cent. “The ministry requires me to throw down a percentage, which drives me mental,” she says. “It sounds ridiculous to fail a kid in character.” Karen Addison, director of the Character Community Foundation of York Region, agrees. “It’s not like there’s a thermometer and the level goes up, the level goes down,” she says. “It’s a very intangible thing.”

To formally assess children’s characters, schools between Ontario and British Columbia have begun distributing a questionnaire created by psychologist Wayne Hammond. “We’ve proven that the tool is statistically predictable,” says Hammond, owner of a Calgary-based human resources consulting firm called Meritcore. “I can tell you where your character’s at.”

The questionnaire, called the Resiliency Assessment Survey, contains 62 to 82 questions, depending on a school’s preference. Students rank how strongly they agree or disagree with statements similar to “I try to avoid unsafe things” or “I feel hopeful about my future.” The tool creates profiles of each student’s top strengths and weaknesses, such as acceptance, restraint or safety. The results belong to each school board and are used to identify at-risk students and trends within schools. “It starts to give them a round-up,” says Hammond. “Who needs resources? Who needs stretching?”

Alternative measures include the Character Growth Card, invented by American Angela Duckworth, a pioneer of the character movement. Duckworth argues that character, specifically “grit,” is the key determinant of student success. Her hard-copy questionnaire gauges attributes such as gratitude, self-control and zest (defined as approaching life with enthusiasm) by asking students and teachers to rank how often they’ve done things like “kept their temper in check” and “stuck with a project for more than a few weeks.”

A third tool comes from psychologist Mark Liston at the University of Missouri-St. Louis. His online multiple-choice survey measures 11 character strengths in as many minutes, giving students and teachers percentage scores on attributes such as wisdom, empathy and “love/closeness” (one school in Denver had to remove the questions on spirituality because it feared a lawsuit from parents). The results compare each person to “national averages” derived from 1,000 Americans. Schools pay up to $500 per student to take the survey.

A “character portfolio” is another concept of Liston’s. It presents a student’s character scores through Grades 4 to 12, paired with extracurricular and community service hours, journal entries and mentor reports, decorated with personal statements and pull quotes. Liston plans to sell a portfolio program to schools and parents, for students to use in university applications. “When kids start seeing this will help them get into a better college, they’ll start to use it,” he says. “In the past, it’s pretty much been a reference letter. We can do more than that. We must do more than that.” Even if students lie about their empathy, kindness and optimism to buff up their portfolios, Liston says, “How long can you fake it before it actually becomes who you are?”

Alarmingly, some schools are taking character scores more seriously than the researchers intended. This year, nine school districts in California will begin to incorporate character assessments into school accountability, affecting their funding. “We’re nowhere near ready,” warns Duckworth in a column in the New York Times, “and perhaps never will be, to use feedback on character as a metric for judging the effectiveness of teachers and schools.” Duckworth notes that the new measurement tools may not be accurate due to cultural biases—for example, at one school, students from Korea ranked themselves lower on all attributes—and because students hold different standards for character indicators such as “comes to class prepared.” Regardless of the limitations, the measurements threaten to become “high-stakes metrics for accountability,” Duckworth writes. When a California teacher told her that she worried the school’s low scores would mean less funding per student, Duckworth writes, “I felt queasy.”

At W.J. Mouat, character grades range from 50 to 100 per cent, and final grades appear on student transcripts. Fraser hopes to learn more about the concept of character portfolios and their use for university applications. “I think it’s fascinating,” she says. Her students are currently spending their class time publicizing orange shirt day in remembrance of residential schools in Saskatchewan and planning an Aboriginal feast. Fraser expects character education to flood into Eastern Canada as schools show quantitative evidence of its success. “This wave is here,” says Fraser. “This wave isn’t going away.”