Learning how to better care for the elderly, thanks to a new on-campus nursing home with nearly 100 residents 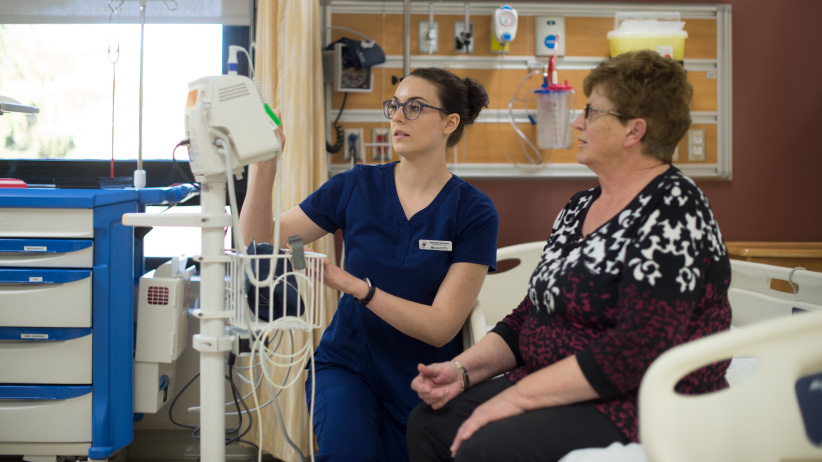 Every September, university campuses spring back to life as students move into their dorms and classes get underway. There’s a flurry of activity on the quad, as friendships are formed and memories are made. This fall, the Université de Moncton welcomed not only their new students but 65 very special residents.

The new faces on campus are residents of the new Faubourg du Mascaret, a retirement complex and nursing home for seniors aged 65 and over. In addition to the new residents at the care home, the complex will eventually be home to more than 30 semi-independent seniors, who require lower levels of care. (All spaces are allocated on a ﬁrst come, ﬁrst served basis.) Two apartment complexes are in the ﬁnal phase of construction, and should be ready for independent seniors to move into by next fall.

The seniors will continue to receive the care they would get at a standard nursing home, but the Faubourg—as students call it—offers something to the university as well: a chance to learn.

“We’re already feeling the consequences of population aging,” explains Suzanne Dupuis-Blanchard, a professor in the nursing program, and research chair in population aging at the university. “We have one in ﬁve people aged 65 and over. So, even outside of health care, the clientele of our students in different ﬁelds is going to be more and more seniors.”

Demographics across Canada continue to shift as the Baby Boomers enter their senior years, but the effects are strongest in the Atlantic provinces. New Brunswick has felt a significant impact, with seniors there comprising nearly 20 per cent of the province’s population: the highest proportion in the country.

The Faubourg is the ﬁrst university nursing home in New Brunswick, though the model is used elsewhere in Canada. It is outﬁtted with two classrooms and a training room, which allow students to take classes inside the facility. For Dupuis-Blanchard, it means her nursing students have a unique opportunity to learn from the patients themselves.

“[We can] teach for an hour, and have students leave the classroom and go into the nursing home or semi-independent area of the [complex], then come back and ask them, ‘What did you see?’ or ‘Who did you speak to?’ ”

Third-year nursing student Danielle Theriault is excited for the possibilities of studying at the Faubourg. Theriault says learning the theory in class is one thing, but actually going through the steps of a physical evaluation is when she starts to connect with the material.

“We’re listening to the heart, the pulmonary system, the respiratory [system],” Theriault says, “and it gives us a positive experience with seniors also. It lets us interact with them. And for them, it’s fun to interact with students and share life experiences.”

Theriault thinks being able to study in the new facility will allow for more hands-on practice, which will cut down on nerves when the students head to hospitals or other facilities for their practicums.

“Let’s say we’re learning how to do a physical evaluation, and they say, ‘Okay, you’ve all learned your stuff, now let’s go see our clients or patients,’ ” says Theriault. “It’s going to be less stressful for us once we’re out there in a hospital.”

Dupuis-Blanchard hopes the students also get a chance to see a spectrum of seniors with different needs. The people in the care home may need health care, while the seniors in the forthcoming apartment buildings could open students’ eyes to what older people are capable of.

“If I look across Canada, and [where] other students in health care are placed, they’re usually placed only in nursing homes. So all they see is sickness. They equate aging to being sick in a bed in a nursing home,” laments Dupuis-Blanchard.

Dupuis-Blanchard says the first students to interact with the seniors are from nursing and other health care ﬁelds, but students studying nutrition, for example, will conduct evaluations for those seniors who still cook for themselves. Kinesiology students can provide physical health evaluations and assist in exercise classes. And staff want to welcome students from other faculties across the university at the Faubourg.

“We could have our future lawyers come do sessions on wills and things like that,” Dupuis-Blanchard says. “To me, everyone, almost all of our programs, could beneﬁt from having this complex on campus. There’s no limit—to me it’s just imagination.”

That’s why Dupuis-Blanchard is hoping to use the Faubourg to kickstart the university’s gerontology program. The program was put on hold seven years ago because of low registration numbers, but it seems interest is rising. Dupuis-Blanchard says she’s received numerous calls about the program in the past two years. With the Faubourg, the university has brought in new faculty who could take on classes on aging.

“In our community, the university is here to answer the community’s need. And right now, aging is at the forefront,” says Dupuis-Blanchard.