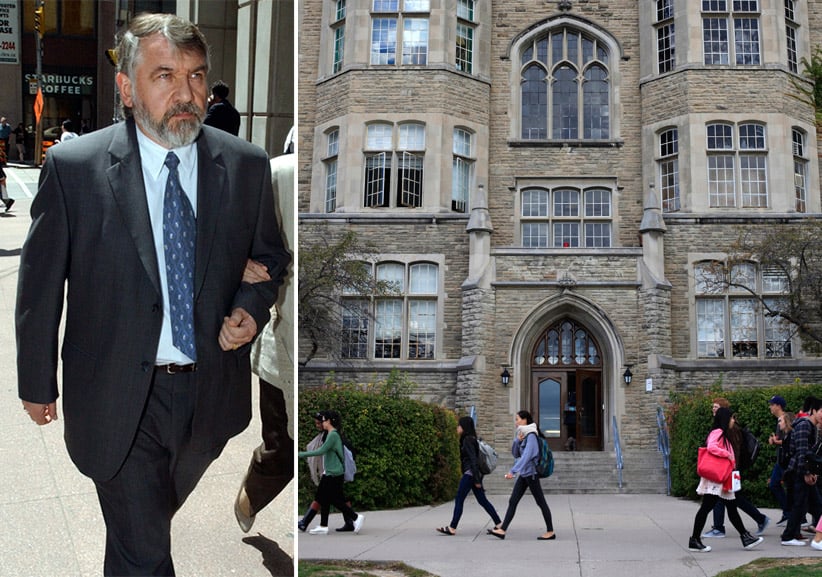 L: Dr. Stanley Dobrowolski leaves a disciplinary hearing, for a lunch break, by the Ontario College of Physicians and Surgeons. This was the fourth time he appeared before the panel regarding allegations of sexual abuse of patients. (Rick Madonik/Toronto Star/Getty Images); R: Students walk by the University College building on the Western University campus in London, Ontario. (Photograph by Jessica Darmanin)

One of the first victims of Western University psychiatrist Stanley Dobrowolski’s sexual abuse says she finds the university’s apology disingenuous. Michelle Stanford, now an Anglican priest in Mississauga, Ont., wrote a letter to university president Amit Chakma today offering to meet with him in person and challenging a number of the statements made in the public apology he issued to survivors on Monday.

“Given the brutality of my experience at the hands of UWO administration, I find your words are appallingly inadequate,” wrote Stanford, who told Maclean’s in an interview that she prefers to be described in this story as a victim rather than a survivor. Stanford first reported Dobrowolski to senior administration at Western in 1989 but says she was ignored and then harassed for years. She finally sued the university and settled for an undisclosed sum in the mid 1990s, which she donated to a women’s shelter.

Dobrowolski worked for Western’s Student Health Services from 1985-94. A number of students raised concerns about his behaviour, and in 1991 two female staff members at the health centre resigned in protest over Dobrowolski’s continued employment.

After leaving Western, Dobrowolski continued to see patients, including former students, in a private practice run out of his home in London, Ont. The psychiatrist was the subject of numerous complaints by female patients for unnecessary sexual contact. He was disciplined by the College of Physicians and Surgeons of Ontario twice in 1995 as well as in 1999 and 2004.

In May 2014, Dobrowolski was convicted on 16 counts of sexual assault, one count of voyeurism involving nine women, and one count of breaking a court order involving 12 women. The court found that he had carried out a number of unnecessary physical examinations on female patients, including “cancer screenings” that involved touching their breasts and vaginas. He also had a collection of almost 10,000 photos of nude and semi-nude female patients, many of which were taken with a secret camera. He is currently serving a four-year prison sentence.

Stanford strongly objects to the words “may have”: “There is NO MAY HAVE for me,” she wrote. “I will tell you that for me, the trauma and pain I suffered by UWO admin was far more severe, life-altering and enduring than the harm experienced at the hands of a mentally ill physician I reported to your predecessors.”

Jane Doe, a woman who says she was sexually assaulted by Dobrowolski and is currently suing the psychiatrist and Western for $2.85 million, told Maclean’s on Monday that she had questions about the line in Chakma’s statement that the university is investigating what happened with Dobrowolski to ensure it doesn’t happen again.

“The fact they’re investigating this in March of 2016, when the abuse has been happening since the late ’80s—it’s perplexing to me, quite honestly, that they haven’t got to the bottom of it in all these ensuing years,” said Doe.

Stanford echoes Doe’s concerns in her letter, writing that if someone from Western wants to properly investigate what happened, they need to reach out to survivors. She asks Chakma: “Why has no one from your office called me?” On Monday, Western provost Janice Deakin told Maclean’s that the university had contacted three student survivors. Stanford says she is personally aware of 11, and there may be many more.

Reporter Zane Schwartz can be reached at zane.schwartz@macleans.rogers.com or 416-764-2828.