Solving crimes, one course at a time 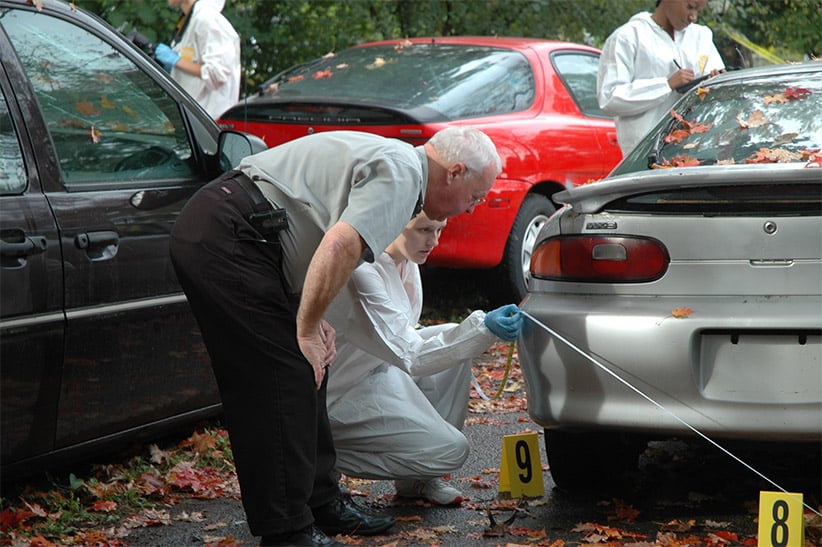 First there was CSI: Crime Scene Investigation, where an elite team of forensic cops solved horrific crimes in 60 minutes. Then there were the endless spinoffs of CSI, and the continuing popularity of Criminal Minds, which spawned another raft of applications to the country’s forensic-science programs. Those hoping to follow in the footsteps of the hunky genius Spencer Reid quickly decamp to psychology once they realize the fictional FBI agent is a behaviour analyst, which has nothing to do with blood-spatter patterns or decomposition rates.

But some professors are taking the spike in interest in stride. At Trent University in Peterborough, Ont., where Barry Saville is the director of forensic science, they have increased the number of spots in the program from 50 to 100, but there are still 250 to 300 students competing for those 100 slots.

“We can’t solve a crime in an hour, but why should we shut down a student who says, ‘Why can’t we solve it in an hour?’” says Saville. “Those shows got our students interested in science—now let’s take that and teach them. It’s not about whether those shows are accurate, which they aren’t, but rather the appetite they’re creating.”

While Spencer Reid may send high schoolers rushing to click the application link, it isn’t all sunglasses and dress shirts. “It’s science. You need to be a scientist,” says Helene LeBlanc, undergraduate program director of forensic science at the University of Ontario Institute of Technology (UOIT) in Oshawa, Ont. “Mask on, hair net on, white coat.” Hot Fuzz, a 2007 comedy starring Simon Pegg, is a better representation than CSI, jokes LeBlanc. “You get to know your co-workers by their eyes,” because that’s all you see of them in the lab all day. The real job isn’t glamorous—it’s science in action.

Some industry insiders feel the television shows do the profession no favours. They are “entertainment, not even edutainment,” says Sylvain Robert, a professor of chemistry and biology at the Université du Québec à Trois-Rivières (UQTR). Robert particularly dislikes the use of the word “match” to narrow down a search to a specific person based on DNA analysis. “We usually say, ‘Failed to exclude this person,’ mainly because an exact match is statistically hard to prove.” Then there’s the timing. CSI makes it seem as though you can enter a crime scene and walk out 10 minutes later with a ton of evidence, which is far from accurate. It can take 12 hours to two days to gather information, according to LeBlanc at UOIT. “Once you leave the crime scene, you can’t go back,” she points out. Students also confuse forensic psychology and forensic chemistry or biology. “Think of it this way: The major sciences, such as chemistry, are more CSI-like forensics,” says LeBlanc. “Psychology is more Criminal Minds.”

But Saville says television shows that stimulate interest in science among young people aren’t a bad thing, especially if they’re encouraging young women to enter the STEM (science, technology, engineering and mathematics) fields, where only 39 per cent of university grads aged 25 to 34 are female.

Students who graduate from a bachelor program in the forensic sciences have several career paths available to them. They can work as police officers; forensic identification officers with the RCMP or the Centre of Forensic Sciences (which investigates unusual injuries or deaths); in DNA, chemistry or biology labs; in medical research; in coroner’s offices; and even in computer analysis. Entry-level salaries are around $40,000 to $60,000, says LeBlanc, though most students go on to get a master’s degree.
Requirements vary by school and province, but chemistry, biology, math and English are a given. The average entering grades range from the low 70s at UOIT to 80 per cent at Laurentian University, depending on the competition.

Here is a sampling of Canadian schools with forensic programs:

UOIT has a state-of-the-art model house where professors stage fake crimes. “It is the largest crime-scene house in Canada, and it was the first,” says LeBlanc. There are cameras throughout so teachers, teaching assistants and technicians can monitor students and guide them when necessary. Because crime-scene photos can be so critical to investigations, UOIT students have to take a photography course. The school also has an ecology research facility for the study of entomology and decomposition. After the first year, students can specialize in forensic biology, chemistry, physics or psychology. The forensic science department accepts 65 students each year; LeBlanc says the Centre of Forensic Science hires some grads every year. Minimum entering grade is 70 per cent.

Trent has its own blood-spatter analysis course, taught by Mike Illes, a former regional manager of forensic sciences with the Ontario Provincial Police and a world expert in the topic.

It offers three programs, including a bachelor of arts with a joint degree in forensic science. Saville says these joint-degree students bring a different, right-brained perspective to the discipline. Some go on to law school; others go on to a master’s in criminology.
Trent also offers exchange opportunities with schools in both Scotland and England. “We have five people coming from there this year, and about three or four going over,” says Saville. Although the curriculum has been focused on producing DNA experts, they are adding chemistry courses to offer more choices to students. The program accepts 100 students every year from about 250 to 300 applications. Minimum entering grade is 80 per cent.

Laurentian’s forensic science lab was featured in this year’s The Amazing Race Canada in the “analyze” challenge, during which the teams had to find 10 pieces of bone and tooth in a staged crime scene and plot the location of the evidence on a graph. The program has been part of Laurentian since 1998, when it was added as an option to the biology degree. “It was an experiment to see if people would enrol,” says Scott Fairgrieve, chairman of the forensic science department. It was so popular that it was turned into a full degree program in 2004.

Students feel there’s more value in their education if they can see why what they’re learning matters, he says. That’s why Laurentian has students work hands-on right away. “Ninety-five per cent of our undergraduates who pursue a thesis have it published,” he says. Last year, 32 students were accepted from a pool of about 100 applicants. Minimum entering grade is 75 per cent.

If you were lucky enough to be a kid in Trois-Rivières this summer, you might have scored a place in a summer camp in its forensics lab—UQTR hosted 56 primary and high school kids for four weeks. “The first day, they discovered a faked double-homicide crime scene,” says Frank Crispino, director of the research laboratory and co-author of the textbook The Science of Crime Scenes. The kids had to use fingerprints, photographs and evidence to solve the crime.

UQTR’s forensics program is the only one in the country delivered solely in French. It incorporates iPads and new technology in its classes and simulated crime scenes, and in 2012 it added forensic science to its bachelor of chemistry program. The first students graduated in May 2014, and now the school is pursuing accreditation so it can offer a master’s program. “Our goal is to have a full line: bachelor’s, master’s and Ph.D.,” says Robert.

UQTR only accepts 25 students each year, says Crispino. They deliberately keep enrolment low so they don’t flood the market with grads. “This ensures our students get jobs when they graduate.” Minimum entering grade is an R score of 19.

SMU accepts a maximum of 20 students in its forensic science diploma program each year, but some years it may be only 10. As the only forensic science program east of Quebec City, it has fewer applicants. “We don’t have the big numbers like U of T,” laughs Tanya Peckmann, program coordinator and a forensic anthropologist who consults for the Nova Scotia Medical Examiner Service. “We have roughly 30 to 35 applicants every year.”

Not to be confused with a diploma program on offer to those straight out of high school, SMU’s forensic science program is taken concurrently with another degree program. Most students are undergraduates at SMU, pursuing arts, commerce or science. Commerce students have the unique opportunity of becoming a forensic accountant—those who “follow the money.” Where there is suspected fraud—say someone bought life insurance for a spouse only to have the spouse die a week later—the forensic accountant would check the books, Peckmann says.

There are three ways to get in: applying after first year, applying after graduation and applying with industry experience, such as service with the RCMP. Science students will likely graduate on time, says Peckmann, whereas arts or commerce students may need to do an extra semester or two.