At Canada’s top party school, the good times aren’t about drinking; they’re about a strong community

The lineup for Wing Night is one of the wonders of Antigonish, N.S. Hundreds of students are sardined between lineup barricades as they wait to get into the campus pub. The masses radiate body heat like a bonfire, with students sweating until their baby hairs cling to their temples. A balloon surfs the crowds. Each student must find an air hole to breathe. They would benefit from oxygen masks, in this bottlenecked beast of a queue.

“We want to see our friends,” says Rachel Martin, a fifth-year forensic psychology student leaning over the barricade. “Normally, no, we wouldn’t put up with this.” On the first Wednesday of the fall semester, Wing Night is a pinnacle event at Saint Francis Xavier University, which has ranked as Canada’s top party school in the Maclean’s student survey for the past two years. StFX students report partying on 1.8 days per week, for a total of nearly eight hours, compared to the national average of less than once a week for an average of three and a half hours. The culture has become both a strength and weakness of the school, which attracts students and breeds politicians and business owners, but has also hurt its reputation and compelled the school to defend itself. As Maclean’s explored the party scene, students said they were looking for a tight-knit university, and X marked the spot.

“I’ve never felt alone here, ever,” says Emily Morke, a manager at the pub. At Wing Night, she says, “everyone’s here with the same goal in mind, to socialize.” The pub stopped serving chicken at 9 p.m. and booted out anyone under legal drinking age; the night has become a High School Musical sing-along that is nearly frosh-free. Students buy pitchers of beer for $4.75 (Maclean’s data suggests they spend an average of $29.65 per week on alcohol, the highest nationally). Hugs all around, bare backs and leftover sunburns—the pub is a flocking ground for social butterflies and X-branded extroverts.

While the pub-goers clap to music, athletes do clap push-ups on a field nearby. The football team sprints and stutter-steps around the field, with three times as many coaches as Antigonish has town councillors. Team rules say the X-Men don’t party after they lose a game, and they must be in shape to keep up with about 20 hours of practice and meetings each week. 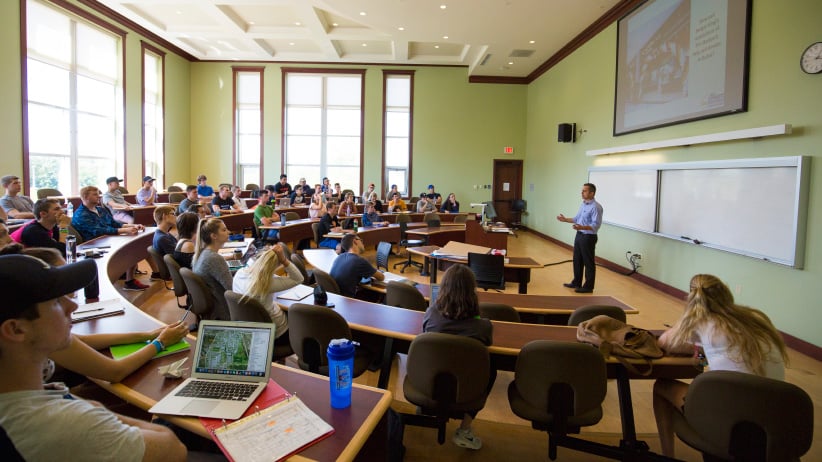 The highly social culture at StFX has been a breeding ground for politicians and business owners, including Brian Mulroney and Gerry Schwartz. Here, Mark MacIsaac teaches business 101. (Photograph by Mikaela MacKenzie)

Other students have stayed home because they’re working part-time jobs at local restaurants or shops. Brianna Dunn, a third-year nursing student from Cape Breton, whose brother is studying to become a priest in Sao Paulo, says, “I’m here to get an education, is what I’m here for.”

In downtown Antigonish, other students choose the Piper’s Pub for karaoke. As they belt out lyrics—they’ve “got soul” but aren’t “soldiers”—the hostess reminds the crowd-turned-choir to beware the “seriously expensive equipment” and bans backup dancers from the stage. Students mostly comply with the karaoke law. A young woman dunks her hand in her glass and throws her ice cubes on the floor, and a young man dances a one-handed hula.

“Good crowd,” says Frank Spencer, a 65-year-old retired Sobey’s truck driver, who employs his cane as an air guitar. Spencer says Antigonish adores StFX and the student activities. Given that it’s frosh week, first-year students recently had a talent show in which a student played Justin Bieber on kazoo, and a group challenged the Guinness World Record for the largest game of freeze tag. “I don’t find I need to have a lot of alcohol in my system to have fun,” says Raelene Maclean, a first-year student from Tyne Valley, P.E.I. (and she has a high standard for fun; her uncle owns amusement parks). 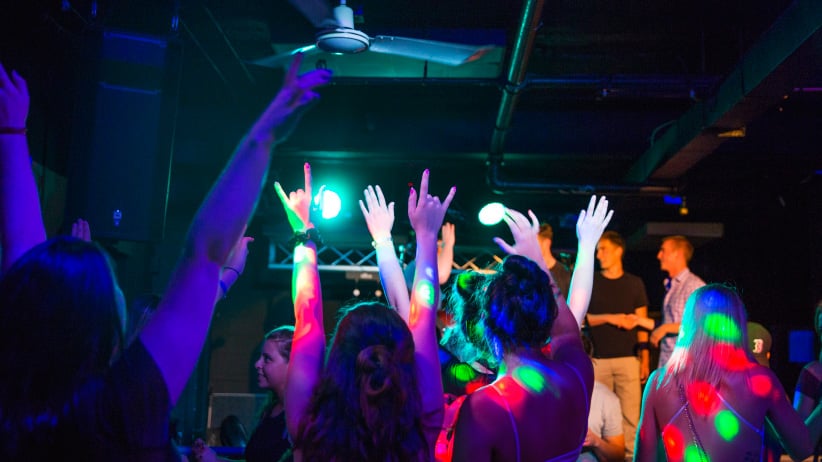 StFX is sometimes dismissed as ‘the party school,’ but its students see the highly social atmosphere as one of its best feature. Here, students dance at The Inn (the student union bar) on the first wing night of the semester. (Photograph by Mikaela MacKenzie)

However, partying can cross a line. “I didn’t know everyone drank that much,” says a first-year student who requested to remain anonymous. At home, he says, “we never drank. It wasn’t really in our culture until I came here. It seems like it’s the basis of a lot of relationships.” He adds, “This is all overwhelming.”

Heavy drinking happens at universities across the board, but StFX is notorious. “I’ve had other friends look at me like I’m somehow intellectually not as competitive as they are,” says Renee Proctor, a fourth-year nursing student raised in Antigonish. “They say, ‘you go to the party school,’ as if it’s something to be ashamed of.”

Instead, Proctor is proud to be friends with a surprising portion of the 5,00 students at a university older than Canada. “I’ve never seen any reason to be ashamed of the social culture that we have here at StFX,” and she says she learns about how to work with people—“you’re learning how to just become a student in life.”

The culture at StFX has bred people-persons: Conservative MP Lisa Raitt, former prime minister Brian Mulroney, Veterans Affairs Minister Seamus O’Regan, and former Nova Scotia premier Rodney MacDonald are alumni, as is Gerald Schwartz, the ONEX CEO married to Heather Reisman, the CEO of Indigo Books and Music. (A local restaurant owner even trains students on how to conduct themselves during dinner or lunch interviews—do not order poppy seed dressing that can get stuck in one’s teeth.) Comedian Gerry Dee and author Alistair MacLeod have also donned the X-Ring.

Dating to 1942 when a group of engineering students went to a local goldsmith to design a ring, the X-Ring is the third most recognizable ring in the world next to the papal and Super Bowl rings, according to university lore. Silver or gold and sizing-dependant, the rings cost from $585 to $1,500. At the campus pub, a dry pitcher labeled “X-Ring fund” collects tips to help with the price for the bartenders. 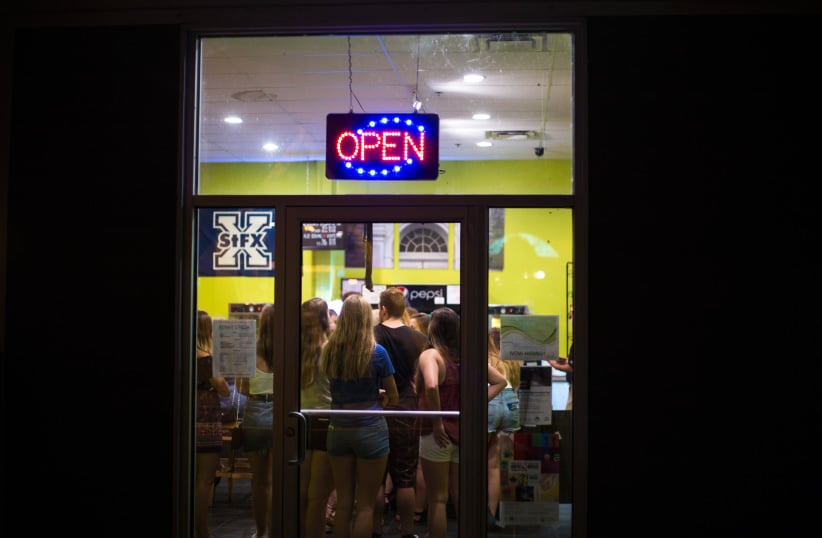 Kenny’s Pizza, not far from campus and right across the street from the pub, is packed with students at midnight on a Wednesday. (Photograph by Mikaela MacKenzie)

After drinking, the finale of the night is pizza, for which there are two rival parlours. Kenny’s Pizza is across the street from Piper’s, for those who don’t want to walk to the Wheel, the older institution blocks away. It starts to rain, but they will eat their pizza in the downpour. Slices glow on warming racks and get dished onto paper plates that flop beneath the weight of the dough. Students ready their wallets, and at each shop, there is a line.

Pull up to the bar
The average student at St. Francis Xavier consumes the equivalent of a case of beer every two and a half weeks.

Beer money
Not all students drink, but if you plan to enjoy a beverage or two, budget for it. Most students will spend $600 in a school year on booze.