Students are lonelier than ever

Loneliness is a silent resident on post-secondary campuses. Why aren’t we talking about it? 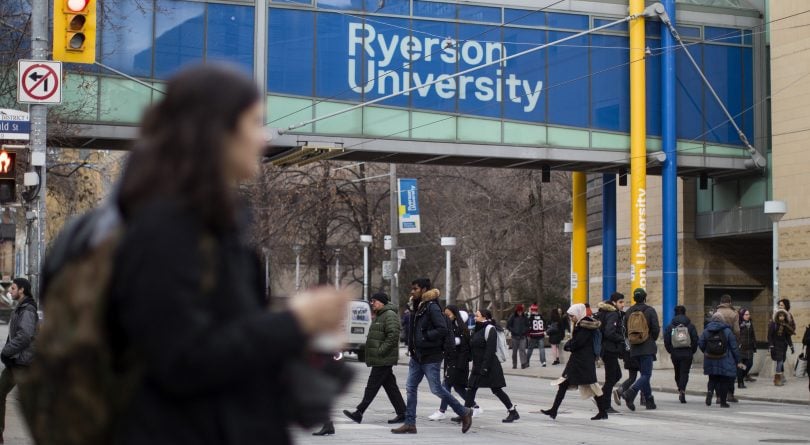 A general view of the Ryerson University campus in Toronto, is seen on Jan. 17, 2019. (CP/Chris Young)

On a warm Friday evening in early September, the city around Fatima Khan is alive. People spill onto the streets, milling about with friends, or head to a bar to grab a drink. Many of her peers, no doubt, are off doing the same.

But she, inside her dorm room, lays nestled with her laptop underneath brown-and-red plaid covers. On tonight’s agenda: a couple of episodes of Family Guy with a side of hot Cheetos. After that she might call her mom, and surf Netflix for the next hour, landing on either The Office or Black Mirror (if she’s in the mood for it). All this is a strategic waiting game for sleep, her only constant companion for the night.

Her weekdays parallel those of others her age—classes at Ryerson University and shifts at work. But Khan is also lonely: she sits alone in lecture, eats lunch alone, walks to and from classes alone. Her university experience is marked by few friends and a lot of free time.

“There’s not really a lot I have to look forward to,” she says, rolling a wad of tissues between her hands, in slow, cyclical motions. “After you study, or watch your shows, or eat, there’s not much else you can do.” Some days, the only people she talks to is the takeout delivery guy, or the cashier at Longo’s.

Loneliness is not a new phenomenon, but one that’s seen a resurgence in recent years. It’s prompted a host of unconventional responses: Ontario doctors are offering “social prescriptions” as part of a pilot project to combat loneliness in patients, the U.K. appointed its first loneliness minister in 2018, and even big pharma has researched pills to chemically alter the brains of lonely people.

While it touches different swaths of people, loneliness is a shared experience heightened on post-secondary campuses. A 2016 survey across Canadian universities found that nearly 70 per cent of students felt lonely throughout the school year.

Instead, what makes it onto university and college brochures is a reflection of our cultural fascination with the post-secondary experience, touted often as the best years of our lives, filled with self-discovery and lifelong connections. (A recent admissions handbook from Ryerson University, for example, features several images of students laughing together, studying in groups and eating together.) But for some, starting post-secondary also means leaving behind valuable support systems—childhood friends, families, and at times entire communities.

“For most, it’s a brand-new experience with new people—everything has changed,” says Dr. Ashwin Mehra, a clinical psychologist based in Ontario. Mehra first started addressing loneliness in university students back in 2014, while counselling students across various colleges in New York City.

Students moving into what he describes as the “big and brand-new world” that is post-secondary life are often ill-equipped to deal with it on their own. And international students face the brunt of that already difficult transition.

After graduating high school, Khan, like many of her peers, decided to leave behind family in Riyadh to pursue university in Toronto. The move was overwhelming: she had to find part-time work in a new country, she missed her mom’s cooking and she experienced for the first time a bone-chilling cold, true of a Canadian winter. In the midst of adjusting to a new country and culture, loneliness took over.

Making new friends was the hardest part. It seemed to Khan that everyone in those early classes already knew each other, each with places to be and friends to meet. One year later, she finds herself in the same place: she’s made four friends in her program she might see occasionally.

“Back home, there’s definitely that familiarity,” she says, reminiscing. “You don’t feel lonely, or you’re not socially awkward. I’m fine—that’s my community, my friend circle.”

But here, her loneliness is all-consuming. It’s the little things: turning to Netflix on a Saturday night or ordering takeout for one. She spends most days inside her head, churning thoughts, worries, and anxieties: “There isn’t anyone to share them with,” she says, laughing nervously, and it can get exhausting. She hasn’t told anyone how she feels.

Loneliness carries a stigma, that in an online world, has been harder to escape. “There is this pervasive social media fantasy that we’re always surrounded and having fun,” says Mehra. “Think of how many lonely, depressed people look fabulous on Facebook.”

Some students instead turn to anonymous sources to voice their struggles. Toronto-based graphic designer Marissa Korda runs The Loneliness Project, an online library of people’s stories of loneliness. Of some 2,000 submissions the site has received to date, Korda says stories around loneliness on campus are a prominent, re–occurring theme. Lonely students blame the same set of culprits: losing childhood friends, feeling overwhelmed by coursework and seeing peers adjusting better than they are, through picture-perfect social media posts.

“The university experience is just a really big culture shock,” says Korda. There is rarely discussion about the prevalence of loneliness on campuses, and it’s a narrative she is all too familiar with. “I spent so much time in my first year feeling like there was something wrong with me for not having this magical university experience immediately.”

While most universities have mental health supports in place, there are few institutionalized efforts to curb the epidemic. On-campus resources target what Mehra calls “recognizable vulnerabilities” like depression or anxiety, but rarely social isolation.

What students like Khan are then left with are informal support systems—parties, campus clubs, and classes— to find their tribe. For students struggling with loneliness themselves, Mehra suggests taking advantage of these, and joining clubs or sports teams to find students with similar interests.

A change of environment can also help combat feelings of isolation. Going to the gym, library or café, for example, instead of back to a dorm room after class increases chances of face-to-face interaction. The goal is to “set the bar low” says Mehra, and can start by making one or two friends in class. He also urges students to  consult a therapist or counsellor if their loneliness doesn’t pass.

“If the thought crosses your mind that maybe you should get help, then you should get help,” he urges. “What a lot of students don’t realize is that loneliness and isolation are pathways for other conditions to become full-blown diagnoses, like depression.” Left ignored, loneliness can also lead to anxiety and stress, affecting a students’ physical health and wellbeing.

While students should do what they can, Mehra also argues post-secondary institutions need to do more to address the silent resident on their campuses, by mandating annual mental health check-ups or bringing in older students to share personal experiences around loneliness. He says students need spaces where they can share their vulnerabilities and access appropriate resources for help.

Khan knows her loneliness isn’t going to disappear on its own. She’s since started writing for a feminist publication and is searching for an on-campus job, hoping to meet more people and find friends who will stick.

But making friends is hard work, and on most days, she’s still found holed up in her apartment. Occasionally, she braves the odd social gathering where she floats between rooms, perfecting the art of small talk.

“What else can you do?” she asks. “You can’t just wish away your loneliness.”