The boss who pays student debts

And provides spaces for playing guitar and napping 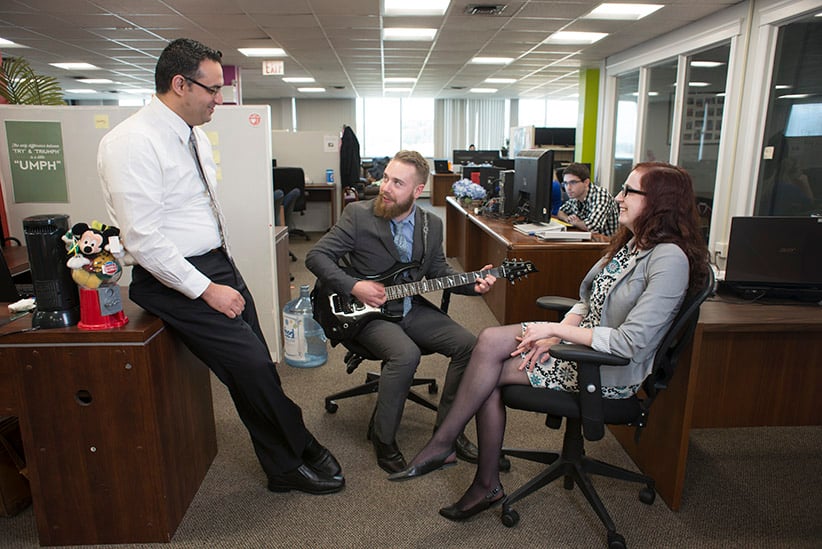 October 16th. 2015 – Simply Cast – Saeed El-Darahali, President of Simply Cast listens to Evan Maynard, a customer care specialist, play the guitar as Allisa MacDougall, a digital copyrighter listens on. Simply Cast has a program in which they help pay off employees debts. (Photograph by Sándor Fizli)

This article was originally published on Nov. 21, 2015

In the five years since Saeed El-Darahali started SimplyCast, a start-up in Dartmouth, N.S., not one of his employees has ever quit. For the 40 people who now work for him, office hours begin as late as 1 p.m., ice cream cakes are common, mini-putt tournaments are encouraged, and footwear is optional.

“I come up with these crazy, unique ideas,” says El-Darahali, 34, who learned to program computers at age eight. “It means we can hire the best of the best and make sure our employees have good lives.”

But there is one paramount perk, prompting recent grads to start applying by the dozens: El-Darahali will make the minimum monthly payment on an employee’s student loan. He began advertising this perk in May, and the first two employees to benefit from the system will begin working in the fall, after passing a three-step interview process. The most expensive of their loans will cost El-Darahali $490 per month, which he will pay directly to the employee, on top of the $60,000 annual salary. By December, he intends to hire another four graduates, who will all likely bring debt for El-Darahali to inherit.

The boss had student loans of his own, after graduating from Saint Mary’s University in 2002. His degree in computer science and his later M.B.A. left him $50,000 in debt, which he had to pay off as he and his wife started a family. After working as an intern for four years at places including Innovacorp, a government-funded agency that helps to fund and mentor entrepreneurs, El-Darahali invented a platform that became the foundation of SimplyCast. The technology offers automated marketing and customer services for businesses, and it merges email, phone and social media systems for individuals or businesses to become more efficient. SimplyCast’s clients include the Bank of America, Eastlink and members of the U.S. Congress.

For entrepreneurs in Dartmouth, El-Darahali wants to create opportunities locally, so they don’t have to look for work abroad—not even across the bridge in Halifax. “He considers himself a native of silicon Dartmouth,” says James Eddie, a history student who has worked with SimplyCast for about a year as an account manager. “He can offer something for everyone.” In the hiring process, applicants have the option of creating their own jobs, where they pitch themselves and their skills. If Eddie continues to work for SimplyCast after graduating in 2016, he will benefit from the debt-payment program. “It’s fantastic,” he says, “and the workplace is all about having fun.”

The office has an Xbox room, a napping room and a lobby for playing guitar. “It’s almost like home,” El-Darahali says. “Some guys grow their beards very long. Others have blankies at their desks.” Employees choose their hours, as long as they are in the office between 1 and 5 p.m. “If their kiddos are up all night, or they have doctors’ appointments, it makes sense for them to come in late,” he explains.

SimplyCast made nearly a million dollars in its first year, and is now seeing double-digit growth each month. Part of the company’s success stems from El-Darahali’s ability to pick and choose whom he hires, as he receives applications almost daily. Employees are motivated to grow the company, not only because they will get promoted for securing new clients, but also because they value their utopian jobs. And if people fail, the boss celebrates their mistakes by offering them a podium to share what they have learned. In this unconventional company, interns offer opinions at senior decision-making meetings, where the executives are listening as they sit in sock feet. “I spend 80 per cent of my week without shoes on,” says El-Darahali. “But we don’t go barefoot. You never know what it could smell like.”

Despite his playfulness, El-Darahali has always been driven. On report cards, teachers remarked, “Saeed never sleeps and is always working.” At age 14, he started a company selling cotton candy to 150 stores across Nova Scotia, with his dad driving the van until he got his licence. Two years later, while he was in high school, he joined the military reserves and ran the candy business on weekends. Now with four children under the age of 10, and a company growing as fast as his kids, the pace is only picking up. He wants to set an example for other businesses, especially within Nova Scotia, to create jobs that sustain the well-being of employees. “I guess my hidden agenda is that I have kids whose lives I want to be good later on.”

For El-Darahali’s team, staff parties this year might include rock-climbing, a harbour tour on a tall ship, or all-you-can-eat sushi. The competition among applicants is fierce, but, at least until December, he is hiring.

FILED UNDER: Student Finance The Vault