The Canadian at the centre of Wimbledon 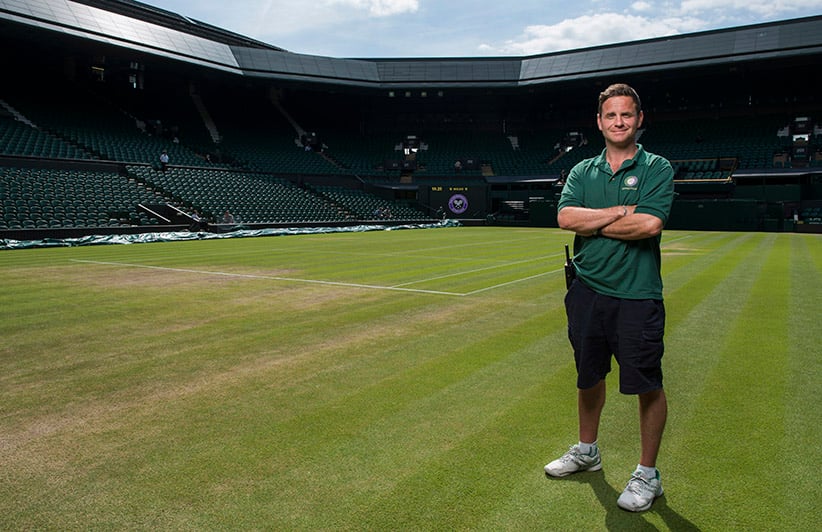 Deputy head groundsman Grant Cantin on centre court at the All England Lawn Tennis and Croquet Club where Wimbledon is held each year. ( Jon Buckle/AELTC)

When he was a teenager growing up in Stony Plain, Alta., Grant Cantin knew exactly what he’d be being doing on summer Sunday mornings: cutting the lawn. First at his parents’ house, then grandma’s. “To be honest with you, I hated it,” he laughs. “Isn’t that funny?”

Hilarious, actually—considering he now earns a living taking care of some very prominent blades of grass.

Cantin is the deputy head groundskeeper at the All England Lawn Tennis and Croquet Club, home of the annual Wimbledon Championships. Originally hired as a part-timer in 2002, he planned to work there for a few months before jetting off on his next adventure. Today, the Albertan is ultimately responsible for the most prestigious playing surfaces in the sport of tennis. “It’s very nice to hear a Canadian voice to talk to,” he says over the phone from London. “I’ve been over here for so long that when I hear a Canadian accent, it sounds foreign to me. It’s crazy.”

Almost as crazy as his back story.

After graduating high school, Cantin landed a well-paying job at an Edmonton trucking company, making way more money than all his buddies. But as he approached his mid-20s, he felt an itch to try something different—so he quit, moved to Calgary, and went to work at a golf course. “I absolutely loved it,” he says. “I was amazed at how the putting greens and the fairways were so immaculate, and it got me thinking: ‘How do these guys get the course looking so great?’ ”

Two colleagues encouraged Cantin to enrol at nearby Olds College, which offers a diploma program in turfgrass management. For two years, he learned everything from irrigation to pest control to soil management. “People don’t realize that there is a lot of science that goes into it,” says the 41-year-old, who graduated in 2000. “The program basically opens you up to the world of fine sports turf. You learn everything you need.”

Diplomas in hand, he and two roommates travelled to Australia, finding work at the esteemed Lakes Golf Club in Sydney. By then, Cantin still assumed his ultimate job would be a golf-course superintendent, but two Brits who worked with him in Sydney altered his plan. They suggested he apply for a spot on the summer grounds crew at Wimbledon. He did—and he’s been there ever since.

“When I was at Olds College, I never, in my wildest dreams, thought I would be running the show at Wimbledon,” Cantin says. “When I first came here, I wasn’t even a big fan of tennis. I love watching tennis now.”

Not that he spends much time watching the ball. He’s much more focused on the players’ feet—and any damage those sneakers inflict. All told, Cantin is responsible for maintaining the pristine condition of 41 grass courts during the tournament, knowing full well that nearly one billion viewers see the results of his handiwork on television.

“My gold medal is when Roger Federer comes over and says the courts are fantastic,” he says. “When Andy Murray won in 2013, it had been 77 years since a British man had won Wimbledon. It was a huge deal and, the next day, even though he had media commitments coming through his ears, he made sure to come talk to us to say: ‘Great job, guys.’ ”

In 2015, Cantin returned to his alma mater to speak to students following in his footsteps. His advice was simple: Be the first to show up to work, the last to leave, and always ask questions. “Anybody can do it,” he says. “There is no secret. There is no magic. Just lots of hard work.”