The invisible and high-tech work of non-destructive inspectors 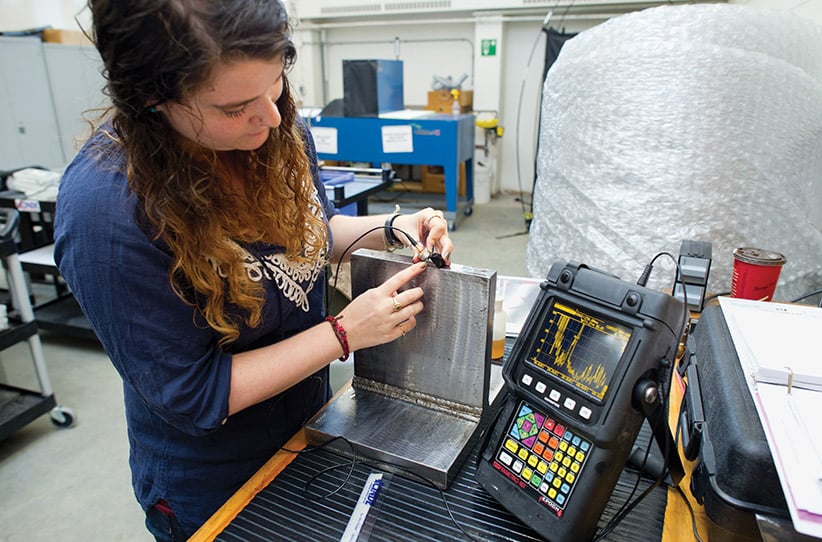 MACLEANS-MOHAWK-09.28.15-HAMILTON, ON: Justine Sutor is a student in the quality engineering technician – non destructive evaluation program at Mohawk college in Hamilton, ON. (Photograph by Cole Garside.)

As post-secondary education loomed for Justine Sutor, a teen from Windsor, Ont., she set her sights on a career as a high school history teacher. Today she laughs as she explains that the program she ultimately chose could scarcely be more different than teachers’ college. “I liked to find out how to make things,” Sutor recounts. Drawn throughout high school to machine and wood-working classes, and fascinated by AutoCAD technology applications, Sutor followed her father’s advice when he suggested she look into the technical professions that are perennially in high demand in Canadian industrial settings.

Currently enrolled in a certificate program at Hamilton’s Mohawk College called Quality Engineering Technician-Non-Destructive Evaluation (NDE), Sutor, now 21, is preparing to enter a regulation-driven profession that is long on demand and short on well-trained graduates. She’s one of just six women in a class of 34 students at Mohawk this fall.

NDE professionals use a range of technologies—radiography, ultrasound, liquid penetrants—to inspect critical mechanical systems, from airplane engines to nuclear plants, rail-car tankers to industrial machinery. The common denominator is that these technicians can’t directly check parts, such as the interior of pipelines, so they use sophisticated sensing equipment that collects data indicating hidden weaknesses such as faulty welds.

Base salaries range from $60,000 to more than $100,000 for positions in remote locations, such as Fort McMurray, Alta. In fact, NDE is a highly portable designation and students such as Sutor are attracted by the opportunity to travel and work in Canada and abroad.

Some NDE testers work for quality control or preventative maintenance departments at manufacturing plants, while others are employed by contractors who specialize in testing services for everything from utilities to pipelines. Inspection protocols are driven by ISO certification standards and safety regulations, which have grown more stringent as governments seek to prevent environmental and industrial accidents resulting from equipment flaws.

Also known as non-destructive testing, “NDT is everywhere,” says Larry Cote, president and CEO of the Canadian Institute for Non-Destructive Evaluation. “It’s fairly invisible because it works.” But, he adds, Canada’s existing NDE workforce (about 6,000 inspectors) is rapidly approaching retirement. A 2012 industry paper estimated that the profession’s average age is 52, which means there’s a growing need for younger inspectors who’ve been trained and certified on the latest technologies.

There are seven NDE programs at colleges across Canada, including two in Alberta. Mohawk’s program, however, was the first, and touts close ties to both southern Ontario’s heavy industries, as well as a federal certification office in Hamilton. Students can choose to add a co-op placement or complete four semesters consecutively. According to Cote, these programs turn out about 300 grads per year, and about 200 find positions within a few months. The NDE degrees, moreover, can be finished in about half the time it takes to acquire a skilled trades certification, even though remuneration levels are similar.

Mohawk’s program attracts both high school graduates with strong math and technical aptitude, as well as mature students making the transition from skilled trades—machinists and welders—in the wake of plant closures or layoffs. Douglas Marshall, an instructor at Mohawk, says the courses provide students with both the scientific theory behind testing technologies and plenty of exposure to the equipment. “They’re getting some hands-on experience as to how to inspect.”

Sutor adds that her instructors, all of whom have recent field experience, are extremely knowledgeable. “The teachers do a really good job to make sure you understand,” she says.

Cote says the slump in the oil sector has dampened demand for NDE hires in Alberta, but adds that the demographics of the profession, plus the undiminished need for more testers in a range of sectors, continues to generate job offers in industries such as aviation. Indeed, despite the sluggish economy, Sutor finds herself approaching graduation without any of the trepidation felt by many students emerging from postsecondary programs.

Is she worried about finding work when she finishes? “No,” Sutor replies, “not really.”