The new program that has First Nations' reading scores soaring

At the start of the school day one morning last month, Dayna Thunder, 11, sat polishing an application letter for a job at Tim Hortons. She had pretty much nailed this writing exercise—perfect grammar, neat presentation—by the time a visitor showed up at her Grade 6 class at Hillside School, run by the Kettle and Stony Point First Nation in southwestern Ontario. So Dayna didn’t mind taking a break from the draft on her computer screen to chat.

She had not much to say, it turned out, about the imaginary Tims job. But Dayna lit up when the conversation shifted to the several novels she had recently devoured from the short list for the Forest of Reading awards, presented every year by the Ontario Library Association for the best new children’s books. Asked what sort of career she really has in mind, Dayna didn’t hesitate. “I would like to be a librarian or a historian,” she said.

Only a few years ago, such bookish ambitions would have seemed incongruous for a kid at Hillside. Like many First Nations schools across Canada, reading wasn’t taught very successfully in this Ojibwa community on the shores of Lake Huron. Teachers tended to attribute their pupils’ struggles to the nature of the community of about 2,000, which suffers from its share of the economic and social problems all too common on reserves. If kids failed, teachers “got into the excuse game,” says principal Cathy Hampshire. “Oh, well, they can’t do this. Let’s make them feel good, let’s make them feel safe at school.”

All that started to change in 2010, when the Martin Aboriginal Education Initiative, founded by former Liberal prime minister Paul Martin, brought a model school project to Hillside, and also to Walpole Island Elementary School, in another Ojibwa community about a two-hour drive from Kettle Point. The project’s aim was to overhaul the way reading and writing was taught to students like Dayna. Four years later, the test results they achieved were nothing short of inspiring.

When the project was launched, only 13 per cent of Grade 3 students at the two schools met or exceeded Ontario’s target for reading proficiency when they took the province’s standardized Education Quality and Accountability Office (EQAO) test. By 2014, 67 per cent met or bettered that EQAO standard, just a shade below the 70 per cent of students who succeeded province-wide at public schools. Similar steady progress was tracked in the EQAO tests for Grade 6 students at the two schools.

News of the rapid progress—first reported this past winter when the Martin initiative released summary results—arrives at a time when First Nations across Canada badly need cause for hope when it comes to education. On June 2, the Truth and Reconciliation Commission—created in 2007 to probe the history of thousands of Aboriginal children sent to government-funded, church-run residential schools through much of the 20th century—is slated to table its final report.

The dark legacy of residential schools, where many children were mistreated and forced to abandon their languages and traditions, looms over any discussion about on-reserve education. The last of the residential schools closed in 1996, but federally funded First Nations schools still fail to prepare most Aboriginal kids to succeed. According to 2011 Statistics Canada figures, 58 per cent of on-reserve Aboriginal students drop out of high school, compared to 10 per cent of non-Aboriginal teenagers.

The latest bid to usher in a new era was Prime Minister Stephen Harper’s attempt to negotiate an agreement with the Assembly of First Nations on a new First Nations Control of First Nations Education Act. But the terms of that law, which sought to boost standards in on-reserve schools, caused a bitter split within the AFN, and the lobby group for about 600 bands ultimately voted last year to reject it—losing $1.9 billion in new federal funding that would have come with the reforms.

Against this backdrop of epic historic wrongs and current political deadlock, the model school project stands as beacon. Martin says the idea emerged a few years ago after his initiative learned about the problems of First Nations students at the high school level, where his group offers training in entrepreneurship to Aboriginal teenagers. “Kids who drop out in Grade 10 don’t really drop out in Grade 10,” Martin says. “They dropped out in Grade 4, 5, or 6, because they didn’t learn to read and write.”

Looking for ways to intervene earlier, Martin sought advice from the foundation of software billionaire Bill Gates, which had worked on fostering literacy in the U.S. To his surprise, the Gates foundation recommended that he meet with a group of educators in Toronto, who had attracted wide praise a few years earlier by turning around literacy standards at previously low-achieving Ontario public schools. That suggestion led to Martin to Julia O’Sullivan, dean of the University of Toronto’s Ontario Institute for Studies in Education, who signed on as chief adviser to his model school project.

At the outset, Martin approached the chiefs of Walpole Island and Kettle Point to ask if they were interested. They readily agreed. The incentive was obvious: the Martin initiative, with key additional backing from the Pathy Family Foundation and the Lawrence and Judith Tanenbaum Family Foundation, would spend about $1 million over five years in each of the two schools.

But O’Sullivan says the promise of new resources came with the prospect of hard work, especially for teachers. The core of the “turnaround school” model developed for Ontario public schools was intensive training for teachers in better methods for teaching reading and writing. To provide this mandatory professional development, O’Sullivan recruited Vaughan Stoyka, a highly regarded teacher from the Peel District School Board, just west of Toronto.

And so, for four years, Stoyka was a continuous presence at the Hillside and Walpole Island schools. But what exactly did she do? In an interview, she resists offering simple answers. “I was a cheerleader, mentor, trainer,” Stoyka says.

Walpole principal Steve Styers, a Mohawk of Ontario’s Six Nations, says the training Stoyka gave teachers was integral to the project’s success. “It wasn’t just, ‘Here’s the program,’ ” Styers says. “She sat and watched the teachers. She tailored the professional development to their style. She got beat up a little at the start—all of us are a little suspicious when somebody rides in to save the day.”

Nobody is suspicious anymore. Stoyka instilled new techniques, grounded in academic research, about how kids learn about language, and how a classroom should be organized. A key change was establishing a non-negotiable rule that reading and writing would be taught for 100 minutes every morning from kindergarten to Grade 8. Other activities are not allowed to intrude. “You’re not doing this or that,” Stoyka says. “This is when you must be teaching.”

The project also insisted on setting a clear goal: raise those EQAO test scores to the provincial standard. “Testing was huge,” says Nebeesh Shognosh, a teacher born and raised in Walpole Island, who took on a special “literacy liaison” role between the Martin initiative and the school. “At the beginning, I didn’t give EQAO a lot of credibility,” says Hillside Grade 3 teacher Katie Padfield. “But [testing] is a game you’ve got to play to bring glory to these kids.”

Rising test scores gave the schools a new way to engage parents. “We just kept putting out our success stories time and time again through newsletters [sent] home,” Styers says. Spreading pride changed the place of the schools in community life. “You don’t see our school all graffitied up,” says Chief Tom Bressette of Kettle Point. “There are no broken windows.” 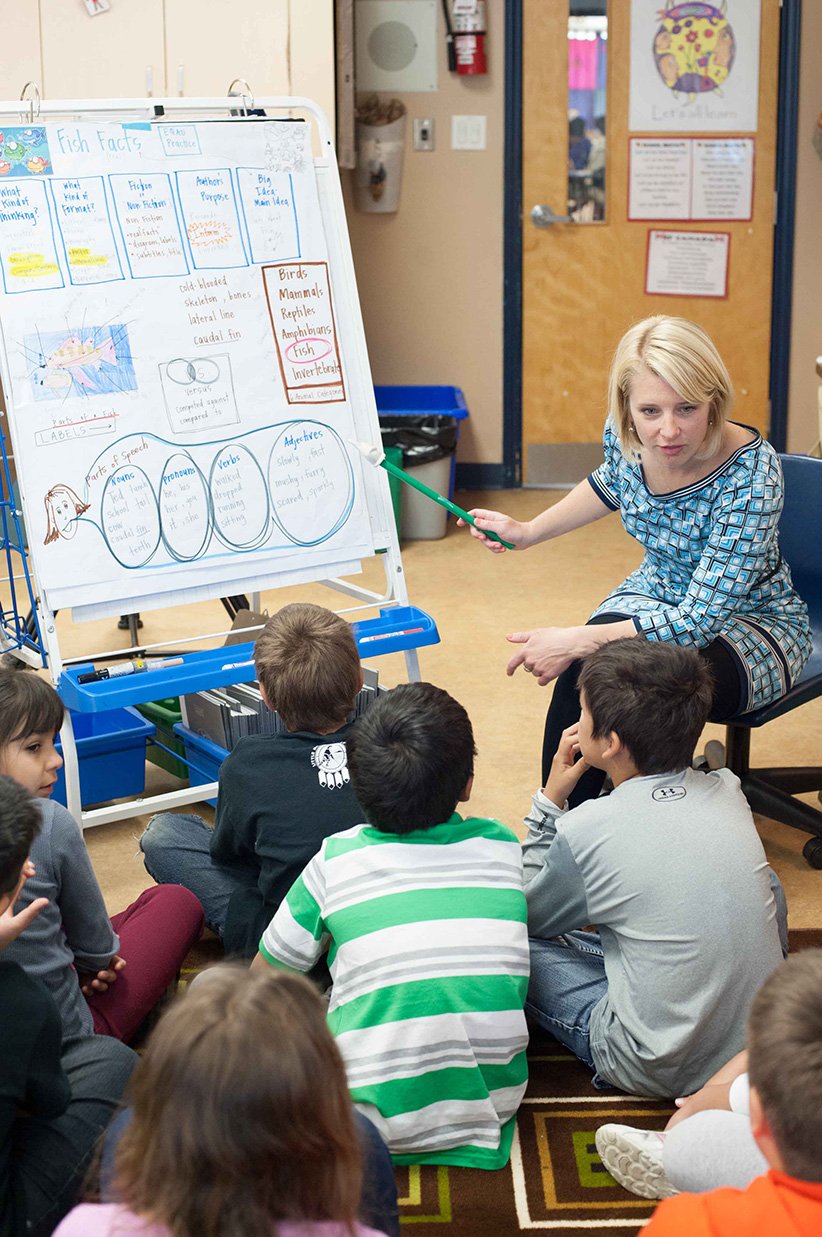 Yet it didn’t always go smoothly. A few teachers wouldn’t adjust, and no longer work at either of the two schools, where there are no teachers’ unions. “I knew I was going to take a hard line with staff,” Styers says. Hampshire says attitudes changed when teachers realized the project brought tangible advantages. “These were teachers who hadn’t seen new books, hadn’t seen professional development, because the money just wasn’t there.”

Both principals say the Martin initiative offered them unprecedented support. On-reserve schools are funded by the federal government, usually at a lower level per student than comparable provincially funded public schools. As well, they lack the support of any nearby board of education. Styers says the Martin initiative filled the role of a well-run board.

But the backbone of the project was that training for teachers. Stoyka led professional development sessions every two weeks at both schools for four years. “This was a once-in-a-lifetime opportunity,” Styers says, “and we had to milk it for all it was worth.”

O’Sullivan says the need to upgrade teachers’ skills points to an issue that goes beyond First Nations schools to university education faculties. “We do not do a good enough job preparing teachers to teach reading and writing well,” she says. In middle-class communities, where most kids are exposed at home to books and written material online, parents might make up for a teacher’s shortcomings. But “in schools that serve high-needs populations,” O’Sullivan says, “we have children who need excellent teaching most, and they suffer most if they don’t get it.”

And they perhaps beneﬁt most when teaching improves, as the project’s test scores seem to show. But can those gains be sustained? The project has now shifted into a two-year monitoring phase; Stoyka is no longer visiting every two weeks. The teachers are expected to keep teaching effectively without that outside support—and pressure. 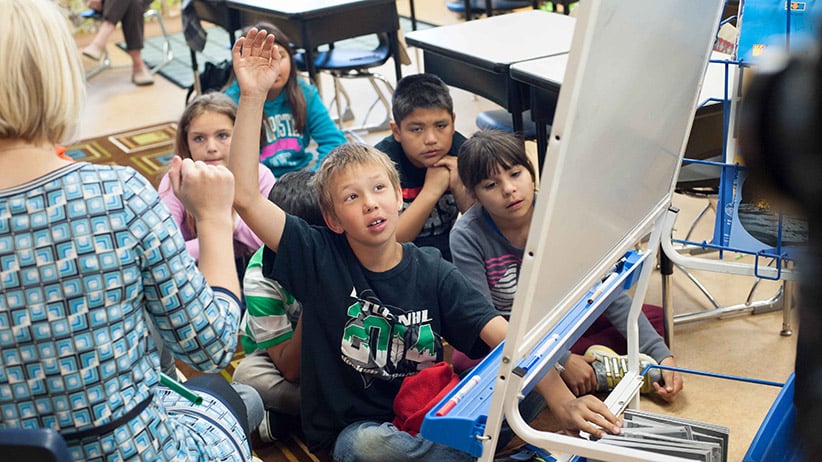 Martin says savings from far lower special-needs demands should help offset the cost of making the project’s approach available to every Aboriginal community that wants it. He says First Nations are “flooding” his group with requests, but only government could finance the program nationally. “At some point,” Martin says, “when you’ve demonstrated that the system can be reformed, and the First Nations want it, government has to say, ‘This is a good thing and we’ll support it.’ ”

That is unlikely to happen anytime soon, though. Martin is a Liberal elder statesman and a blunt critic of the Harper government’s Aboriginal policies. No approach with his name attached is likely to gain traction with the Conservatives in office.

Still, Carlana Lindeman, education director of Martin’s initiative, sees tantalizing national potential. She estimates the project’s approach could be replicated anywhere in Canada for $350,000 a year at schools on First Nations linked to highways, and perhaps $500,000 in more remote reserves. “There’s a lot of optimism that this would not be hard to transfer to other jurisdictions,” Lindeman says. Not hard, that is, with enough political will and public financing.

Kids aren’t apt to think of themselves as guinea pigs for public policy. Three poised Grade 8 students at Walpole exchange shrugs when asked about the way they’ve been taught for the past few years. They seem to have soaked up the benefits, though. Corbin Jacobs talks of becoming a social worker to help those struggling in his community. Kallie Johnson has a clear plan to study baking at community college, and then open her own pastry business. Desi Sands wants to be a veterinarian.

And why not? They read and write well enough to aspire to anything. If only that was as unexceptional in all First Nations classrooms as it has become for kids in these two lucky schools.