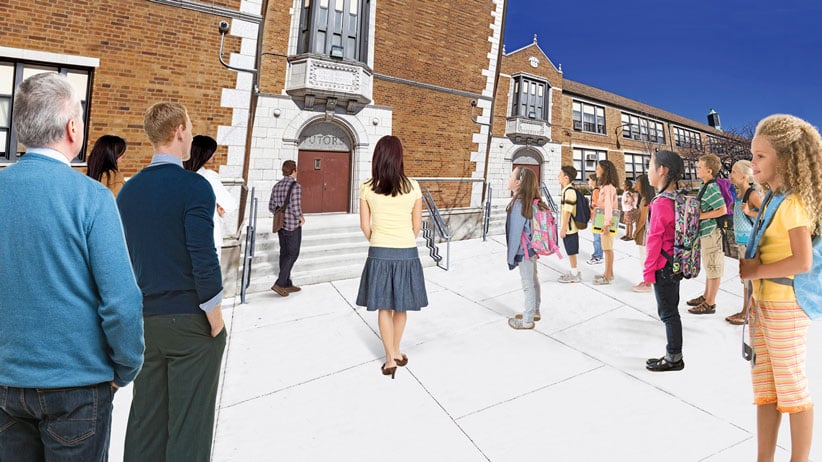 It’s not piano lessons, dance classes, or even playdates; the biggest extracurricular activity after school nowadays is more school—or to be precise, going to a tutor. “In the last couple of years,” says Pat, a mother of three in midtown Toronto who doesn’t want to use her real name, “I don’t think there has been one week where a tutor hasn’t been over at least three times. I think I spend $700 to $800 a month on tutors. I’m not happy about it.” But, says the stay-at-home mother, “after finding out half my daughter’s class had tutors, I felt like my child was going to fall behind because everyone else seemed to be ahead. Now I know why.”

Like many parents, Pat couldn’t help her children with their homework after Grade 3. “I didn’t understand half of what they are learning,” she sighs. “And math—the way they learn it now is over my head.” When her husband comes home from work, she adds, “we want to sit down as a family for dinner, not be stressing about homework. It’s costly, and it does piss me off, but I can tell you there’s a lot less yelling and tears at my house since the army of tutors arrived.” Her children are now getting above-average marks. And she admits she has “a tutor on tap” for nights before tests.

Shelley, who also has three children, has a constant rotation of tutors coming in and out of her Calgary home. “When I used to sit down with my children, it was hard to get them organized and focused. I was constantly yelling. But when I got a tutor once a week, they became focused for one entire hour and could get most of their homework done.” She has a tutor for each of her children. Two of her kids also have Mandarin tutors, “so they can grasp what I think is the language of the future,” she says.

This isn’t simply a private school phenomenon: both families have different children in both public and private schools. Nor is tutoring geared toward lower-achieving students—it’s now catering to average and high-achieving students, who want to keep up with their peers, if not do better than their classmates. According to a 2004 study, the number of tutoring companies grew between 200 per cent and 500 per cent in major Canadian cities during the 1990s.

Overall, studies suggest parents hire tutors because they are worried schools are not meeting their expectations. According to data based on surveys of over 70,000 high school students and 30,000 junior-high students by the Toronto District School Board, released to Global News under access-to-information laws, five per cent of students in grades 7 and 8 reported using a private tutor in 2006; that increased to eight per cent in 2011; usage by high school students in the same period rose from seven to 11 per cent.

Julie Diamond, president of Toronto-based Teachers to Go, started her company in 2011; she has approximately 100 tutors on her list, all of whom have bachelor degrees in education. She cites a change in the style of teaching math as a big factor. “The education system is now using ‘discovery learning’ where students explore through different learning strategies, while the way our generation was taught was only memorization.”

But Diamond also mentions a cultural shift. There is a special value placed on education in cultures around the world, especially in India, Japan, Korea and China. “It is customary in many cultures for parents to spend money on their children’s education and as a way of showing a family’s economic status in some cases,” says Diamond. In Asia, she notes, tutoring is viewed as an extension of the school day.

One parent, who came to Canada from Dubai, has a math tutor four days a week, and it’s not because her child is behind or even getting average marks. “She doesn’t complain about it,” this mother says. “It’s just the way we do it in our house. We expect nothing lower than 90 per cent in all subjects.”

Confession: I have a tutor once a week for my daughter, now in Grade 6, and have learned since that almost half of her class has tutors. Her teacher has a special email list she sends out to tutors of students in her class, to let them know what they should be concentrating on that week.

“The students finished the unit on proportional reasoning (percents, ratios, etc.) and wrote their math test today,” read a recent email. “The next unit . . . will be about measurement . . . The main misconception I have noticed in the past about volume is that the girls do not realize that the volume of any prism can be found by first calculating the area of its base and then multiplying by the height, since they learned LxWxH to find the area of a rectangular prism in Grade 5, they often apply the same formula to other figures which of course does not work.”

“Are you kidding me?” says one parent who read the email. “I can’t even understand what the teacher is telling the tutors.”

Some parents even bring their tutor in for parent-teacher interviews. Along with report cards from my daughter’s school, I also receive report cards from her tutor. One such “achievement” report noted “the goal is to avoid procrastination and create a routine of completing home assignments before the due date. We will also work together to ensure that she is prioritizing her work and her outside activities.”

Shanna Rabinovich Reichman is a private tutor in Toronto who doesn’t advertise; she lands clients through word of mouth. She says these days parents are both extremely competitive and proactive and want their children to learn good study habits from an early age. “There is a high demand for math, particularly the junior/intermediate levels,” she notes.

There has clearly been a shift in the stigma around tutoring. “Children used to get bullied for having a tutor,” says Diamond. “Now it’s becoming the norm to have one.” Though rare, she has come across parents who try to steal tutors away from one another (another reason why parents aren’t always open about their children seeing a tutor).

Leanne, a tutor, says that poaching does happen, “but we have to sign a contract to not steal clients.” Plus, she adds, when it comes to tutoring, it’s only one or two hours a day, so there’s often time for multiple clients.

Susan Cumberland, who founded School is Easy Tutoring in Vancouver, says her business has grown every year since it opened in 2002. She says newcomers’ attitudes toward education have had an impact. “Immigrants come from countries where there is fierce competition for few spots in universities,” and they see tutoring as a necessary investment, she suggests.

Another reason for the uptick in business, she says, is not only parental frustration, but their packed schedules. “A lot of parents just don’t have time to help their children with homework. Parents are busier than ever,” she says. “And the amount of homework given out doesn’t leave for much ‘fun’ time at home.”

Cumberland has many client families who start with a tutor as early as Grade 1, and says she gets “quite a few calls” for children as young as ﬁve. “This is the age that students are learning the alphabet and to read,” she says. “Parents get nervous when they see other kids reading and their kid is not.” Once in a while, she says, she even gets calls for three- and four-year-olds.

The biggest complaint from tutors? Those families who call in a panic because their child has a test the next day. “We will help them if we can, but we let them know that we don’t produce miracles,” Cumberland says. “We don’t recommend it.”

Still, at short notice a tutor can calm students’ jitters by helping to organizing their thoughts, doing a quick review, and giving them confidence, says Cumberland, whose company employs 1,000 tutors. “I know that sounds like a lot, but many of our tutors have gone onto full-time teaching jobs and they want to stay on the active list in case a good match for them comes up.” Tutoring gives them the opportunity to make extra money—some of her tutors can work 25 to 30 hours a week.

Tutoring may also be a lifeline for graduates from teachers’ colleges who don’t have full-time employment at a school. Tutors from Teachers To Go charge $55 an hour, with a portion going to the company. Self-employed private tutors often charge $20 or more per hour.

One parent whose child goes to a private school just outside Toronto is appalled that so many of her child’s classmates have tutors. “For the amount we pay in tuition, they should have as much extra help as they need,” she says. Still, she’s now thinking of getting a tutor. Why? Her daughter has actually asked for one.

Children themselves don’t seem to mind that they have a tutor—it’s their parents who are still leery of admitting it.