For the first time ever, Maclean's ranks individual university programs 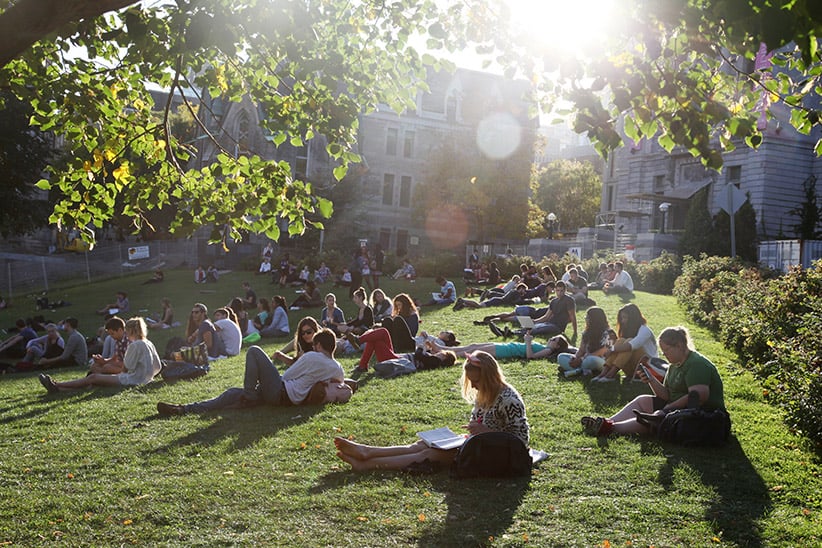 Students relax on the lawn next to a football field at McGill University. This part of the campus is known as “the beach” because it’s a great place to catch some rays. (Photograph by Roger Lemoyne)

Picking the right university is hard. There seems to be an endless amount of conflicting advice, opinions and data. To help make the selection process a little easier, for the first time ever, Maclean’s is ranking universities in 10 program areas.

If you, or someone you know, is interested in business, engineering, education, computer science, geology, environmental science, nursing, biology, psychology or mathematics, these rankings will serve as a helpful place to start.

Maclean’s has sifted through the noise to provide a ranking that comprises our largest-ever reputation survey and hard data on Canadian universities, resulting in 10 Top 20 lists. The top 10 lists are available on our website here. Top 20 lists are available online for computer science universities and engineering universities. To see the full rankings in all program areas pick up a copy of the magazine, which is on newsstands and available for download in the App Store, Google Play and Texture.ca.

In general, the big research-intensive universities, such as the University of Toronto, the University of British Columbia and McGill University, came out on top—not surprising, given the indicators with the most weight measured research impact. But a number of smaller research institutions—which appear in our annual Maclean’s University Rankings in the comprehensive category—also shone. Montreal’s Concordia University, which lives in the shadow of McGill’s massive reputation, cracked the Top 20 in business, education and computer science, while Wilfrid Laurier made it on to four lists. York, with its Schulich School of Business, placed third in the business ranking behind UBC and U of T. Waterloo, a school known for its strength in left-brain pursuits, placed fourth in psychology. Brock University, in St. Catharines, Ont., ranked in the Top 20 in psychology, education and geology.

In the Maclean’s University Rankings medical-doctoral category, Dalhousie University in Halifax blew past larger institutions to place seventh in biology and nursing, sixth in psychology, in a tie for fifth in environmental science, and fourth place in geology. The University of Ottawa came sixth in engineering and nursing.

The subject areas are primarily in the sciences. That’s because bibliometric data are used for three of the five indicators, so we selected programs likely to have a comparatively higher publication count in order to ensure sufficient data to make meaningful comparisons. It excludes most of the social sciences, arts or humanities; in subsequent years, Maclean’s hopes to expand the program rankings to cover more subjects.

The ranking relies on two indicators that attempt to measure one intangible that universities trade on: reputation. We surveyed more than 1,200 deans, chairs, and professors at more than 80 schools and asked them to identify the schools they thought had the best programs and were doing the best research in their area of expertise.

Maclean’s program rankings combine five indicators to provide a picture of the best Canadian universities in the 10 program areas. Each of the five indicators is assigned a weight to come up with an overall score. Three are based on hard data provided by Elsevier from their Scopus database, one of the most comprehensive compendiums of peer-reviewed literature in the world. The other two are based on the largest reputation survey of academics of its kind conducted by Maclean’s.

The five indicators are: field weighted citation impact (FWCI) at 35 per cent, fractional publications at 10 per cent, fractional citations at 10 per cent, program reputation at 35 per cent and research reputation at 10 per cent. FWCI measures the impact of research at each university by calculating how often a paper gets cited; it is normalized based on the global standards within each discipline, allowing universities to compare their performance to the world average. Fractional publications measure the volume of papers published at each university, adjusting for papers with multiple authors by lowering the count accordingly. Fractional citations measure how often a paper was cited, and also take into account if there are multiple authors on a paper. The reputation data reflect the views of more than 1,200 faculty and senior administrators across Canada. Academics were asked to identify their area of expertise, then asked to indicate their opinion on which universities were offering the best programs and conducting the best research in that area. The raw scores for all five indicators are calculated, the scores are then converted to Z scores to show the relative position of each school within the distribution for each measure.

To be included, schools must offer a program in the relevant area and have produced a minimum of 50 papers over the past five years in education, business, nursing, geology and psychology, and a minimum of 75 in computer science, engineering, biology, environmental science and mathematics.