The weird and wonderful work of a university residence assistant

Life as an RA—who works to support fellow students in on-campus housing—can be stressful and strange, but also fulfilling 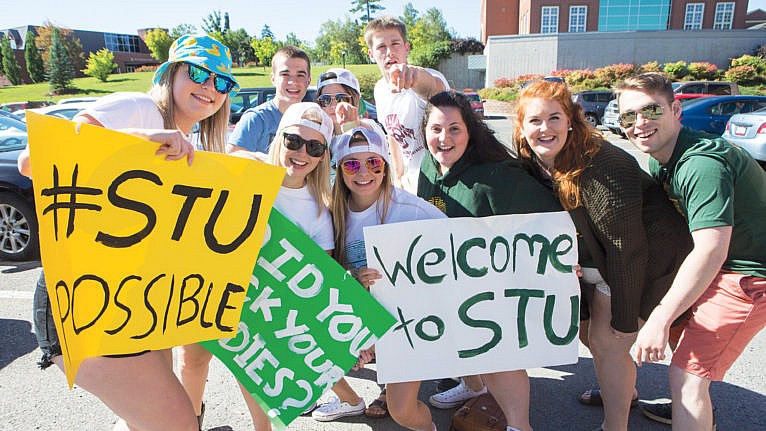 Despite the long shifts and stresses, being an RA can be a positive, even foundational, experience (Courtesy of STU)

“Somebody put a pillow in the washing machine at one o’clock in the morning and flooded the entire second floor of the building. That kind of thing was a Tuesday night.”

That’s Molly Strickland, who worked as a residence adviser at St. Thomas University in Fredericton from 2014 to 2015. Also known as residence assistants, RAs deal with all manner of situations on the campuses of Canadian universities and colleges each year. They are hired to support fellow students who live in on-campus housing, and they receive pay, board or both as compensation. It’s a unique situation, living where you work and having responsibility for your peers. It can be stressful, fun, fulfilling and also just plain odd.

I opted to work as an RA at the University of Regina for two years because I liked the community and wanted to serve it—having money to pay down my rent didn’t hurt either. I also happened to be the first wheelchair user to be hired for the job on my campus, and suspect I was the only RA who ever brought his wheelchair repair kit down to the front desk at one in the morning to help another student. The role is one of my foundational memories of university.

Joy Hannan, a recent McGill graduate who worked as a floor-fellow (McGill’s term for RA) for two years, was looking to build on her previous experience in student government. “I was really involved in leadership and community building at the high school level. So I knew going into my undergrad at McGill that at some point I wanted to do floor-fellowing,” she says. “I really enjoyed guiding [fellow] students.”

RAs are responsible for organizing events—whether they are related to academic development or social support—promoting community and ensuring the safety of students. The job regularly involves lengthy shifts, liaising with office staff, speaking with security and providing mentorship and community support. Levying fines for lost keys or unruly parties is also often par for the course. The student-staff dynamic—neighbour one day, administrator the next—was something Strickland had to get used to.

“RA is an interesting position, because you’re kind of nominally in charge of people,” says Strickland. “But I found, more than anything else, we’re a resource to them. I think I gave out one fine the entire time that I was a residence adviser. It didn’t really feel like my place to be in charge of these other students who are often, like, a year younger or older than me.”

Despite the wealth of communication, team building and problem-solving skills she built in her role as an RA, Hannan still had the feeling that she could never relax. “I’m working in this building, so that means that I’m constantly being surveyed by the other staff,” she says, referring to the other floor fellows and their supervisors. “And I’m basically a role model [to other students] from the minute I step outside my room. It never stopped.” Plus, during her time in residence, conflict arose between student-staff and administration over harm reduction and the implementation of COVID-19 restrictions, something that Hannan calls “frustrating.”

Those who spoke to Maclean’s for this story said that the experience of working as an RA was, on the whole, positive. The high points included meeting students they would have never met otherwise, planning and implementing community-building activities and growing as a communicator. Stickland says that the skills they built as an RA have served them well in their current career working for Veterans Affairs Canada.

“I just got better at being able to talk to whoever, whenever, about whatever it is that could come up,” says Strickland, who decided to become an RA after living in the dorms for two years, and was part of a team responsible for supporting over 100 people. “I talk to veterans and still-serving members on a daily basis. A lot of my job involves helping people sort out whatever their major concern is at the time.”

RELATED: Climate crisis 101: Canadian university courses to prepare you for a greener future

If this job sounds appealing to you, there are a few things to consider. Most, if not all, RA positions require that you have lived in residence for at least one year. Application processes differ, but most have an academic standard that you have to meet and require you to interview as well as to provide a cover letter and resumé. Administrators want to see that you can handle the extra load alongside your studies, that you have previous experience working with peers and that you can be trusted to support the framework of the university.

Hannan says it’s wise to think carefully about why you want to work in residence. “Knowing ahead of time what your year could look like and seeing if you have the emotional, physical and mental bandwidth to take on the role on top of what you already have going on—I think that is important.”

This article appears in print in the 2022 University Rankings issue of Maclean’s magazine with the headline, “Friend, neighbour, officer.”