At least eight people in Canada have been trapped and killed inside donation bins in recent years, leaving many cities struggling for answers on cold winter nights 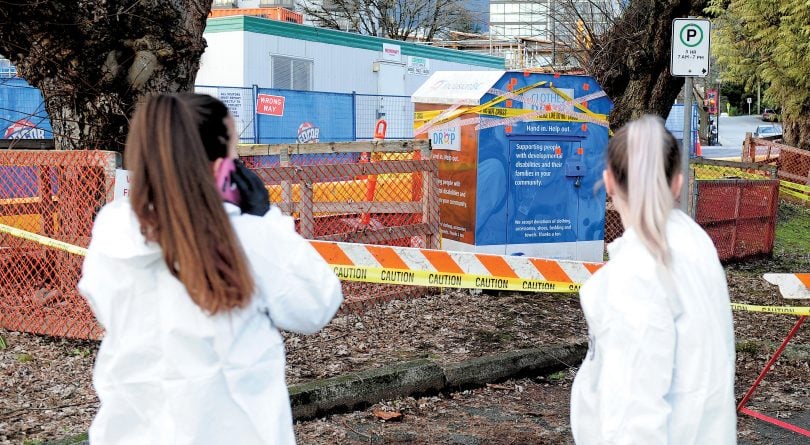 The BC Coroners Service investigates after a man who was stuck in a clothing donation bin was pronounced dead at Ambleside Park in West Vancouver, BC., Dec. 31, 2018. (Nick Procaylo/PostMedia)

At the beginning of his ﬁrst semester last fall at UBC Okanagan in Kelowna, Matthew Holitzki, an 18-year-old from Nelson, B.C., wasn’t sure exactly what engineering entailed. He knew he liked math and physics. But when his professor, Ray Taheri, told his class of roughly 400 “bright-eyed and bushy-tailed ﬁrst-years” that they’d design—or in this case revamp—city donation bins, he quickly realized there was more to the job than building engines and bridges. “There’s a social obligation to help communities,” he says.

Their task: solve a nationwide problem. Donation bins are meant to receive clothing for charities, thrift stores and non-proﬁts, but at least eight people throughout the country have been trapped and killed inside them in recent years, pointing to a critical challenge for cities grappling with shelters and respite centres that run out of beds on cold winter nights. In January, 35-year-old Crystal Papineau died after climbing into a bin in Toronto behind an apartment building; she was found a block away from a women’s drop-in centre. The same happened to a man in West Vancouver last December.

Taheri decided to set the task in July after noticing, as he puts it, a greater “sense of urgency” among advocates calling for the bins to be modiﬁed or hauled off the streets—organizations and municipalities in the province’s Lower Mainland, like Big Brothers and Inclusion B.C., have already pulled theirs from street corners. Burnaby and Vancouver have also removed or temporarily locked them. Rangeview Fabricating Inc., a Hamilton-based manufacturer of bins, halted production after learning Papineau was found in one of its containers; the company says it plans to alter its design.

READ MORE: Why we should pay Canadian donors for their blood plasma donations

This isn’t the ﬁrst time Taheri has challenged his students to solve a day-to-day problem afflicting B.C.’s growing homeless population. Previous students designed “personal belongings” carts for the homeless as a more secure and reliable alternative to shopping carts, with a prototype currently being tested in Kelowna. But in Vancouver alone there are about 2,000 donation bins, Taheri notes, and removing the receptacles from those communities would result in a “cascade” of problems. “Ironically, these donation bins bring in tens of millions of dollars to the homeless community,” he says. “It’s a source of help for these people.”

Students worked in groups of six to develop concepts, and the groups then competed against each other for best design. Like the belongings cart project, the best designs will be handed over to fourth-year students, who will use their experience to build life-size models for potential sale to industry.

At ﬁrst, Holitzki and his partners conceived a range of ambitious possibilities. “We wanted to put on a solar panel. We wanted sensors so it would tell when somebody goes in there,” he says. But they needed the design to be realistic and cost-effective—something that could actually be put to use. They crafted their concept using software, then used supplies from Home Hardware and a 3-D printer to create a miniature prototype. It functioned like a turnstile to accept donations yet could resist rotation depending on weight, and featured a see-through front to reveal what was inside—like a ﬁshbowl ﬁlled with clothes. 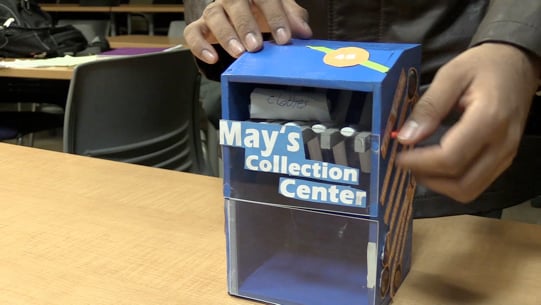 When Manoela Tozzi, 18, listened to her professor muse about the project, she sat in the lecture hall, thinking: “So this is what it feels like to be an engineer.” Tozzi, who is from São Paulo, Brazil, says the problem facing Canadian cities is not one known to Brazilians, probably because “the need to donate winter clothes doesn’t show up that often.”

After scouting local bins, Tozzi and her group identiﬁed one of the common flaws in their design: anyone could open the hatch of a bin, peer in to see the bottom and, if they wanted to, steal donations—or clamber inside. They created a model with an inner cylinder shaped like Pac-Man, the mouth of it rotating to accept donations and then turning away as the door is closed.

They revealed their designs in late November. Students dressed like it was a high school graduation. Rows of decorated tables ﬁlled the room, each showcasing tiny model donation bins that wanted to be something bigger. Judges with clipboards walked around taking notes. It had the feel of a science fair, but Holitzki notes that “it wasn’t all that competitive; everybody had a common goal.”

In the end, neither his nor Tozzi’s group came up with the winning design. They did, however, come away with a tangible sense of the real-life—and live-saving—possibilities their chosen discipline might yield. “I went in there liking math and physics,” says Holitzki. “You could say I kind of found my purpose.” Still, the broader challenges of poverty and homelessness weren’t lost on either the students or their professor, who leaned on the expertise of homeless advocates for this project. If people are putting their lives in jeopardy for a bag of clothes or a night’s sleep, Taheri says, “I can guarantee that we have a more signiﬁcant problem than a faulty donation bin.”