What students are talking about today (Aug. 10 edition) 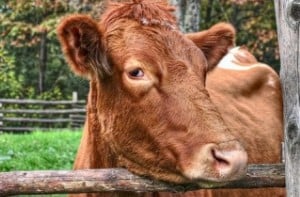 Here we give you the 10 stories that Canadian students are talking about today. Like us on Facebook for your daily fix.

2. An 18-year-old on Bali, Indonesia was caught having sex with a cow. As local tradition dictates, he was forced to marry the cow in front of hundreds of people and then the animal was drowned. In his defense, he said he believed the cow was a beautiful young woman. No word on whether caffeinated energy drinks were involved.

4. Arnold Schwarzenegger, the actor-turned governator of California, could be coming to a classroom near you (if you got to the University of Southern California). He’s launching the Schwarzenegger Institute for State and Global Policy to “promote a new era of post-partisanship.”

5. ???The Parti Québécois, the current front-runner in Quebec’s provincial election race, wants to change the law so that Allophone and Francophone college students are no longer allowed to attend English colleges. The idea isn’t popular with students: 62 per cent are opposed.

???6. Maclean’s correspondent Charlie Gillis is proud of up-and-comer Damian Warner: “For the better part of 24 hours, the 22-year-old from London, Ont. flirted with medal territory in one of the Olympics’ marquee events, serving notice that Canada once again has a decathlon contender.”

7. Jimmy and Jennifer, two other talented Canadian athletes—also robots from the University of Manitoba—are training for the annual robot version of the Olympics. Jennifer is the world’s first hockey-playing robot. Jimmy is trained for summer sports: basketball and weightlifting.

8. The Spice Girls were were spotted rehearsing at a Ford plant in east London along with the Pet Shop Boys, Jessie J, Annie Lennox, Tinie Tempah and George Michael. The closing ceremony show is apparently based around 30 classic British pieces. Wannabe is a classic now, right?

9. Don’t miss this: The annual Perseids meteor shower should reach its peak this weekend.

10. The monthly Labour Force Survey from Statistics Canada was fairly depressing. Following two months of little change, employment in July declined by 30,000 and the unemployment rate rose slightly to 7.3 per cent. Among students aged 15 to 24 who are returning to school in the fall, 70.4 per cent were employed in July (about the same as was the last two years).