100 days of student protests in Quebec 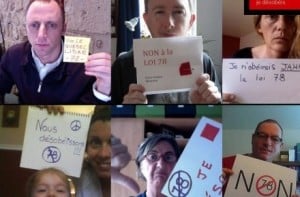 Quebec student group CLASSE said Monday that it will continue to encourage protests against tuition hikes in the province—at least until students are forced back to classes in August.

They plan to defy Law 78, which passed in the National Assembly on Friday. The law allows for fines of $1,000 to $125,000 for individuals and groups who prevent students from attending classes. It also requires demonstration organizers to inform police in writing of their plans, and has thus been criticized as unconstitutional.

A large protest is planned for Tuesday afternoon in Montreal. It marks 100 days since the first students walked out of classes and joined the “grande grève illimitée” or “unlimited general strike.”

Arrests are likely. More than 300 were arrested following an illegal protest on Sunday night in Montreal. At least 20 were injured, including 11 police officers, reports The Canadian Press. Many more were arrested Monday. Mass arrests have become a regular occurrence in the province.

In a move reminiscent of Occupy Wall Street, 3,000 people who oppose Law 78 have posted photos and written messages on a Tumblr website called “Someone Arrest Me.”

The movement is getting extra attention in the United States today. Supporters of Occupy Wall Street are planning a march and a “Free University” demonstration in New York City in solidarity with the Quebec students while Occupy supporters from other cities have Tweeted their support.

Filmmaker Michael Moore Tweeted this on Sunday: “Canadians are in revolt in Quebec over new gov’t law limiting democratic rights. No news of it in US press. Their uprising is inspiring #ggi”

That was before members of the hacking group Anonymous broke into a Quebec government public security website on Monday and warned the government that they ought to be fearful.

Many students in the province have finished their semesters, despite interruptions from protesters who call them “scabs” and have blocked many classes. As of Friday, student associations representing around 25 per cent of students in Quebec considered their members to be on strike.

Much of the anger is over to a tuition fee hike of $1,778 over the next seven years, which Liberal Premier Jean Charest says is non-negotiable. The hike will bring tuition at universities to around $3,800, which is still thousands lower than what it costs in Ontario, New Brunswick and Nova Scotia.

Student groups rejected a deal their leaders made on May 5 that would have created a council to look for savings in university budgets in exchange for an end to the protests.