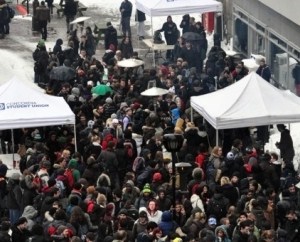 Some 1,200 Concordia University students, including 900 undergraduates, spent their Valentines Day lunch hour at an anti-tuition rally hosted by the students’ union.

The event, called Wintry Hot Accessible Love-in for Education (WHALE), saw students partially capitalizing on the anger over the controversial departure of president Judith Woodsworth, but the principle purpose was to demonstrate against a possible tuition hike in Quebec of $500 a year over the next three years.

Officially the gathering served as the students’ union semi-annual general meeting and a motion was passed to organize a Day of Action against tuition hikes. According to the Link student newspaper, Concordia’s provost exempted participating students from any tests, or assignments due, during the rally.