In two major surveys, students get the chance to grade their own universities.

There are many ways by which a university can measure its performance, including asking those on the receiving end of an education—the students—what they think. In recent years, a growing number of universities have been doing exactly that. The following pages contain results from two major student surveys: the National Survey of Student Engagement and the Canadian University Survey Consortium—NSSE and CUSC for short. Between them, these surveys examine how involved students are in various academic and extracurricular activities, how satisfied they are with their university and its faculty, and how connected they feel to their school.

Want to know what universities are doing to improve the student experience? Click here.

The findings show that while students are generally happy with their university education, there are key areas of discontent. In particular, a significant number of students feel they don’t fit in at their university, more often in the larger schools than the smaller ones.

Commissioned by the universities, the surveys ask more than 150 questions about the undergraduate experience—inside the classroom and beyond. The answers help each university assess the quality of its programs and services, which in turn can aid in the design and implementation of strategies to improve areas as indicated.

Recognizing that this data can also be useful for prospective students trying to decide which university is right for them, Maclean’s has been publishing CUSC and NSSE results each year since 2006. They provide direct feedback from students on the quality of their education and their general level of satisfaction.

The U.S.-based NSSE began in 1999 and is distributed to first- and senior-year students. Administered by the Indiana University Center for Postsecondary Research, NSSE is not primarily a student satisfaction survey. Rather, it is a study of best educational practices and an assessment of the degree to which each university follows those practices. The survey pinpoints what students are doing while they are in school and on campus.

Research has shown that various forms of engagement are likely to lead to more learning and greater student success. And this link exists not only in the more obvious areas of academic endeavour, such as the number of books read and papers written, but also in curricular extras such as conducting research with a faculty member, community service, internships and studying abroad, as well as in extracurricular involvement with other students.

In 2004, 11 Canadian universities participated in NSSE for the first time, with 14,267 students completing the survey. Participation has grown considerably over the years with 64 institutions having conducted the NSSE survey at least once and 12 more schools set to take part for the first time this year. Fourteen institutions representing 8,965 students participated in the 2009 survey.

The NSSE results are headlined by the Benchmarks of Effective Educational Practice, created by NSSE to compare performance across all universities—American and Canadian. These benchmarks focus on five key areas: level of academic challenge, student-faculty interaction, active and collaborative learning, enriching educational experience, and supportive campus environment. The higher a school’s scores from student responses on the five benchmark topics, the better the chance, according to NSSE, that its undergrads are learning and getting the most out of their university experience. NSSE also asked two important student satisfaction questions; school-by-school results appear on the following pages.

CUSC, a group of Canadian universities working together to examine student issues and experiences, was created in 1994 and administers a Canada-only survey. Unlike NSSE, CUSC’s focus is largely on student satisfaction. Each year, its survey targets one of three student populations: first-year students, graduating students and all undergrads. In 2009, 34 institutions took part, administering an online questionnaire to a random sample of approximately 1,000 graduating students at each university. Institutions with fewer than 1,000 graduating students surveyed them all. In total, more than 12,000 students took part for an overall response rate of 45 per cent. The following pages feature results of two CUSC student satisfaction questions.

In its summary of the 2009 results, CUSC said most graduating students had a positive assessment of their university and its faculty. Nearly nine out of 10 were satisfied with the overall quality of their education and their decision to attend their university. The vast majority agreed that their professors were knowledgeable in their fields, encouraged class discussion and were accessible outside of class. But the report identified one key area of weakness, summed up as “inclusion.” Fully a quarter of students stated that they didn’t feel like they were part of their university. Perhaps not surprisingly, the number was higher for students attending larger institutions (31 per cent) than for those at smaller schools (21 per cent). An even greater number of students—57 per cent—reported feeling they sometimes got the runaround at university. Again, smaller institutions tended to fare better on this measure with 54 per cent of students voicing this complaint compared to 62 per cent at larger schools.

Learning from the feedback these surveys provide, universities are now devoting more time and energy to enhancing the student experience—including students’ need to feel that their identity on campus amounts to more than just their student number. Future survey results will show how well those improvements are progressing. (For details on how some universities are using their NSSE results, see “Applying knowledge.”)

The charts on the following pages list universities, including affiliates and second campuses, that have taken part in NSSE surveys or the 2009 CUSC. Each chart lists the universities in descending order of achievement. In NSSE benchmark results, universities appear according to their senior year scores; responses to student satisfaction questions are ordered according to the percentage of survey participants who chose the highest level of satisfaction (e.g., “excellent”).

The NSSE and CUSC surveys include more than 150 questions. The results we publish—the five NSSE benchmarks, plus two satisfaction questions each from NSSE and CUSC—are the broadest and most representative of the student experience.

Some universities have completed the NSSE survey four or five times since 2004—others as little as once. As we are displaying results from the most recent year that an institution participated in the survey, readers should bear in mind that the data are from various years. This year’s NSSE charts include 14 universities that took part in the survey in 2009, 37 from 2008, four from 2007 (Lethbridge, Mount Allison, UNB’s Fredericton campus and UNBC), one from 2006 (St. Thomas) and one from 2005 (Regina). The average NSSE score shown in each chart, however, is derived from 2009 results only. (There were fewer participating schools in 2009 than in 2008 as most institutions do not conduct the survey two years in a row.)

First-year student data are not displayed for Royal Roads University as it does not offer first-year courses. Similarly, there are no results for senior-year students at Mount Royal University as it received university status only last year. Data for the three affiliate colleges at the University of Western Ontario are displayed separately from the main institution’s. 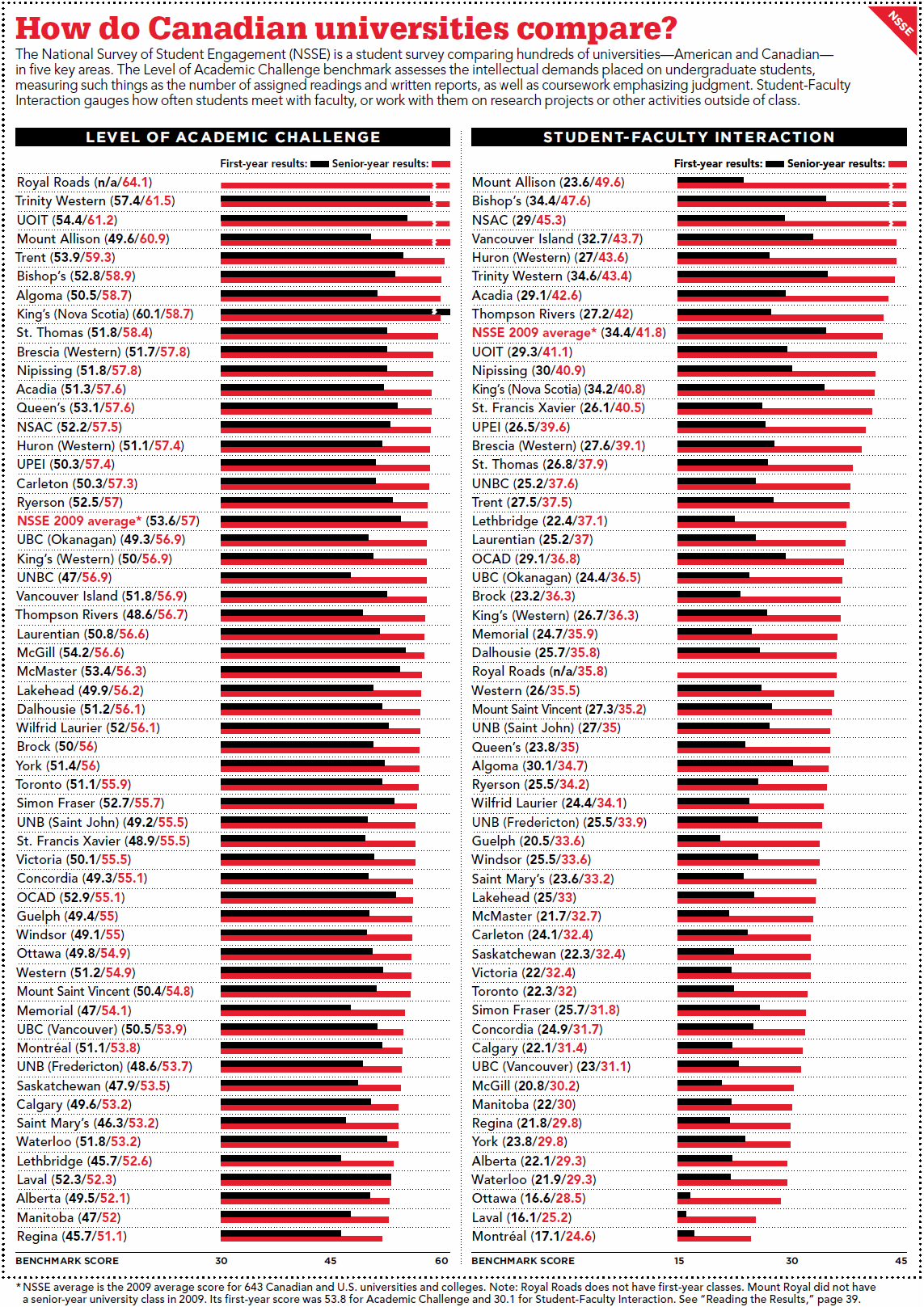 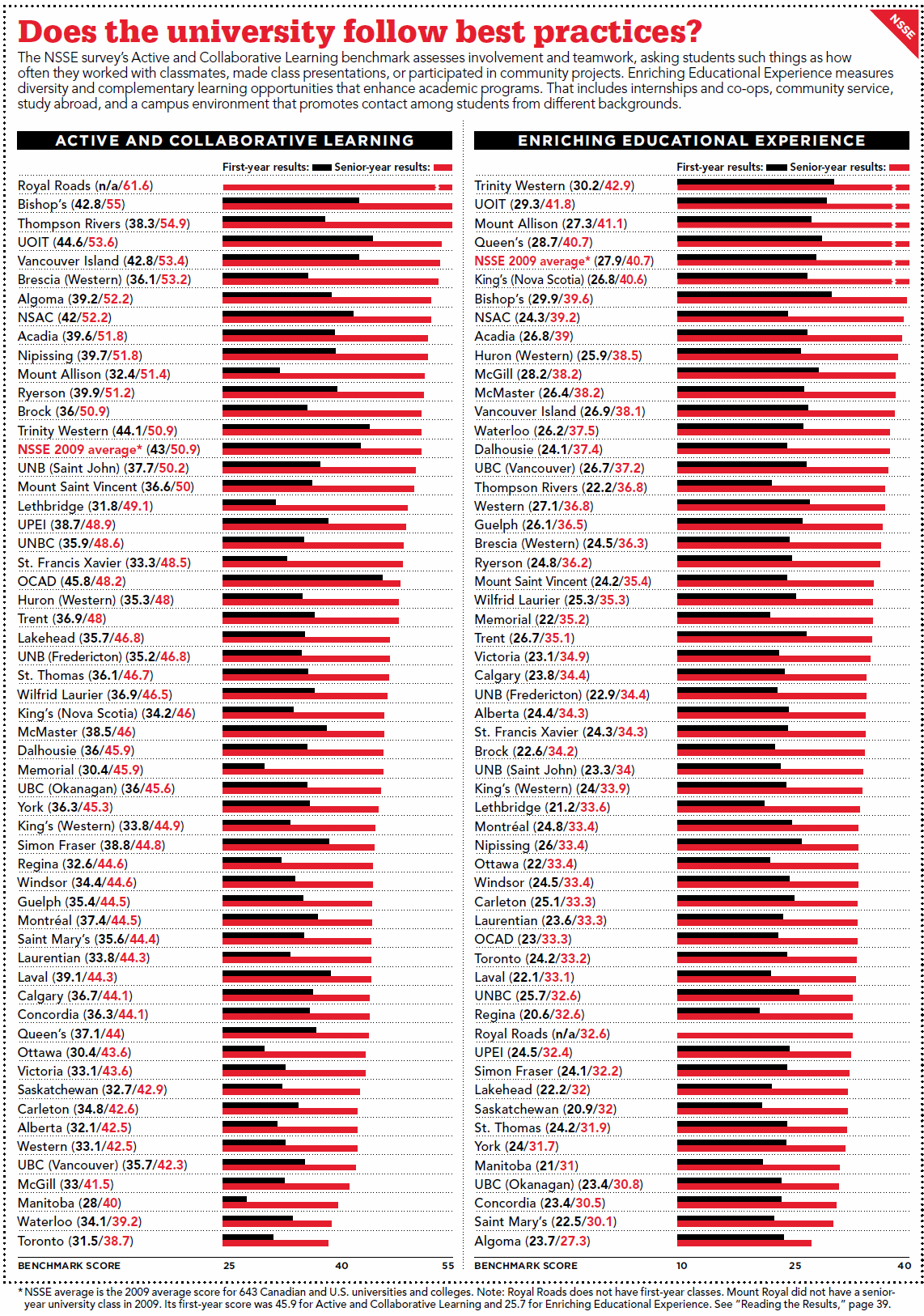 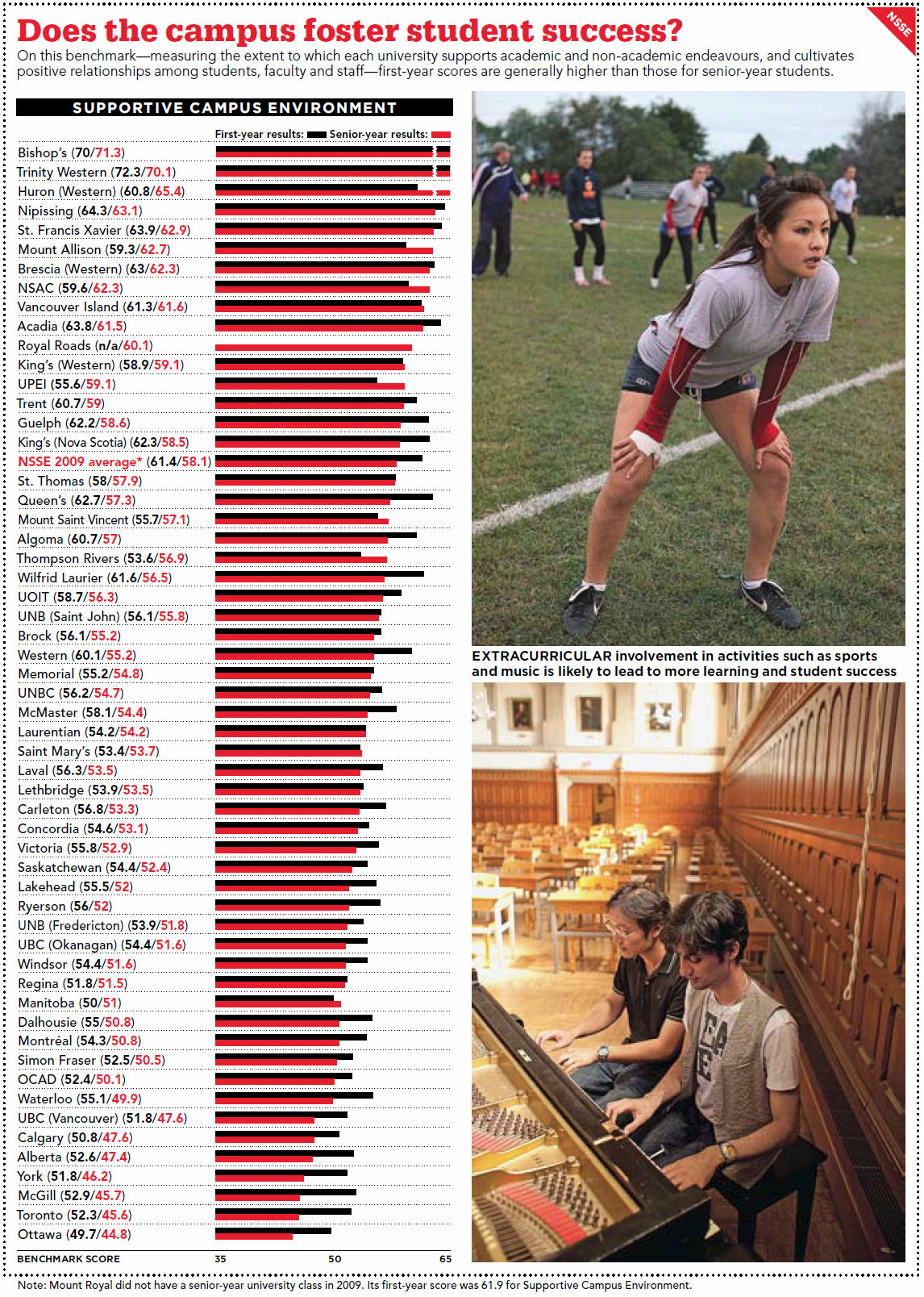 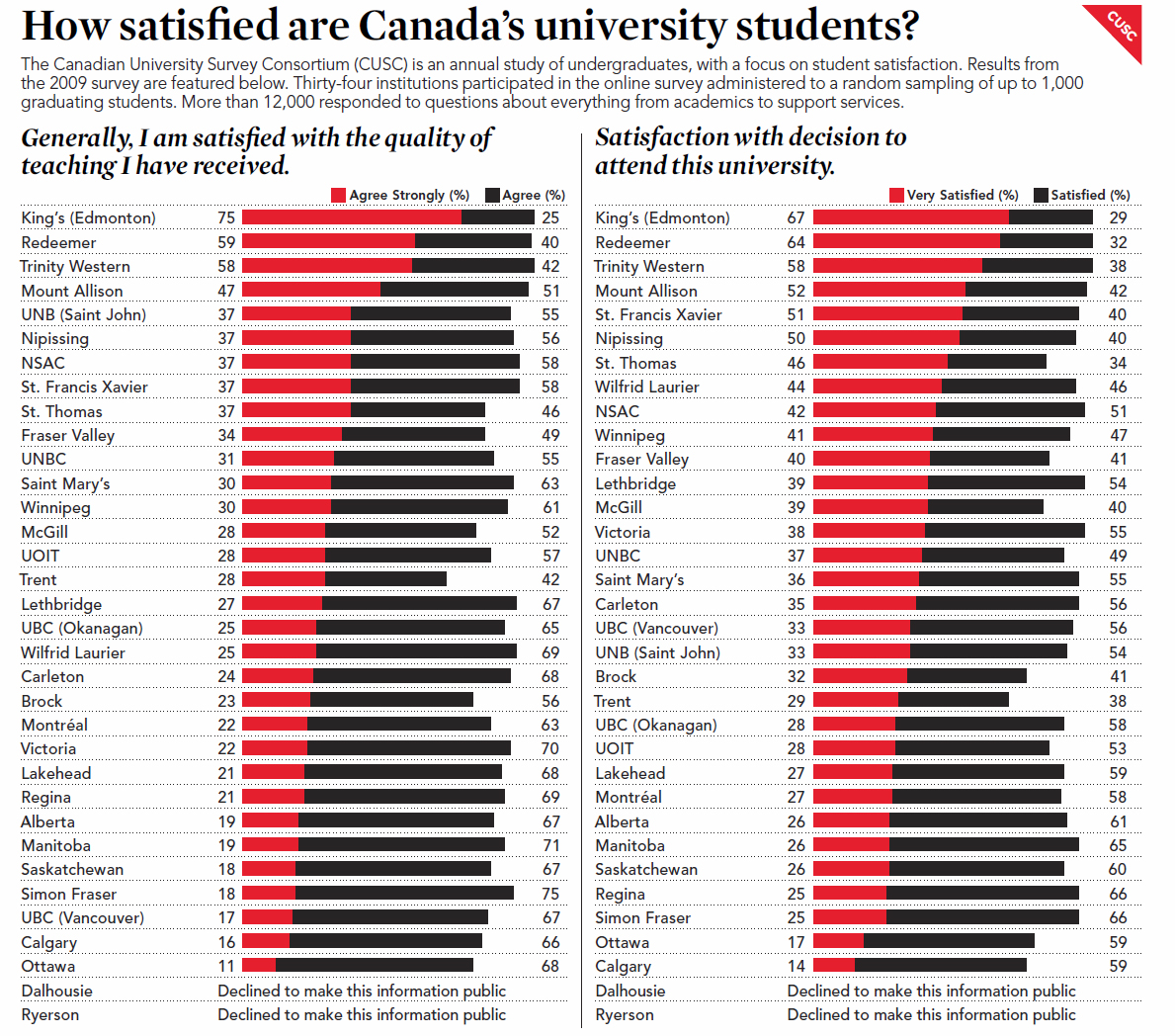 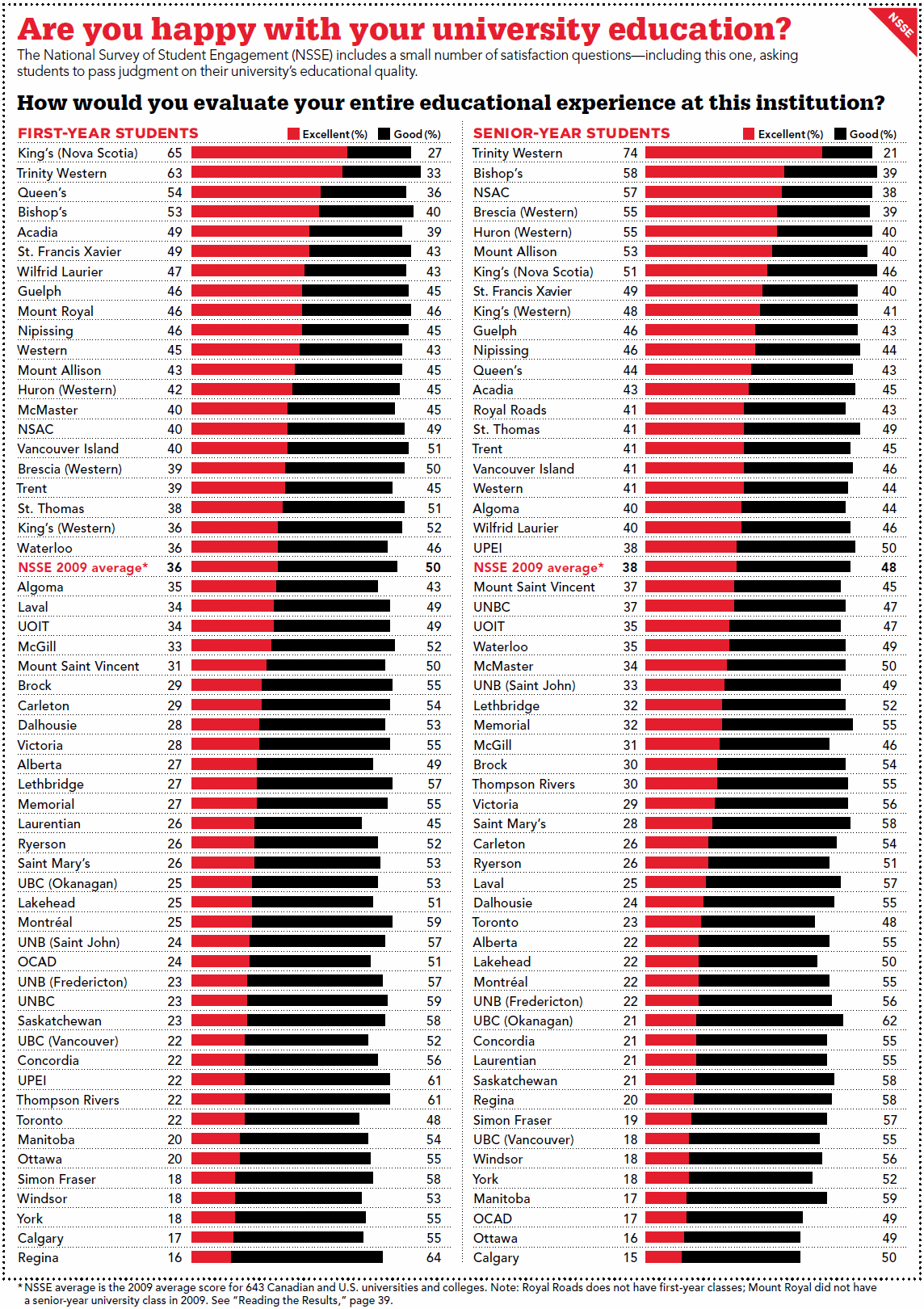 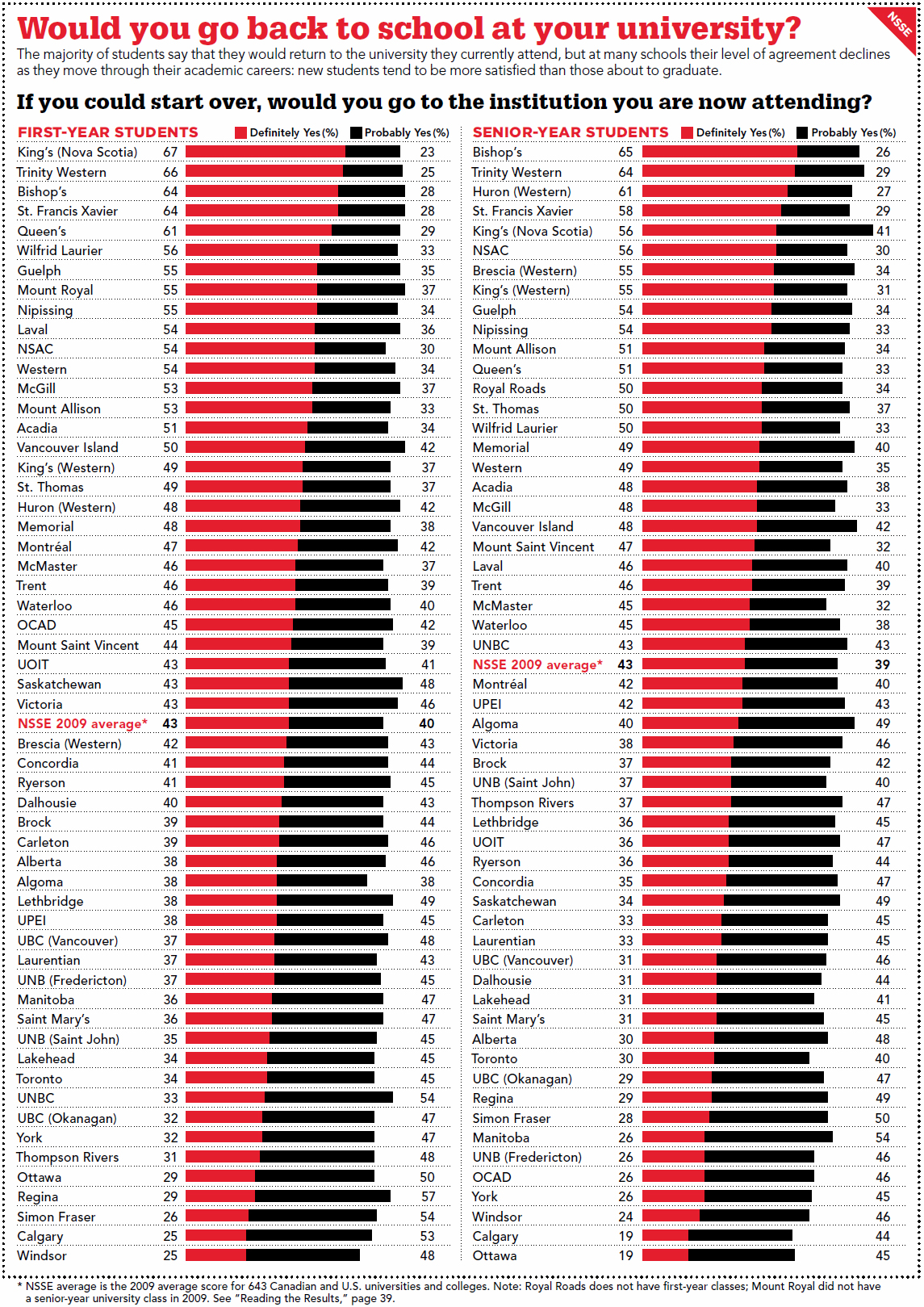