If you’re living on a scurvy diet of raisin bread and Stove Top Stuffing, Maclean’s is here to help 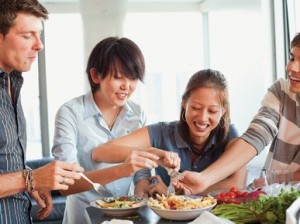 Four 21 year-old University of Toronto undergraduate students are gathered around the table in their Woodsworth College residence’s communal kitchen on a recent Friday night inspecting a bounty of fresh vegetables. “Leeks!” shouts Tingting Zhang, a psychology and neuroscience major who could point out the difference between a ganglia and an axon in her sleep, but takes childlike delight in recognizing the ubiquitous vegetable before her roommates do. Karen Sohn, an economics and psychology major, holds a bunch of thin grass-like spears. “Chives?” It’s more of a question than an answer. Aaron Shapland, who studies Middle Eastern civilization and geographical information systems, takes the easy road and correctly identifies the lone red onion. Meanwhile, the bag of baby arugula stumps Dorin Manase, who studies biology and computer science. In fact, they’re all baffled. “Is that leaves?” asks Tingting. “It tastes like nuts.” In an age when all things gastronomic are featured front and centre in television, movies and blogs, you might think this bunch would be more food-savvy. But as Karen pops a yellow-coloured cherry tomato into her mouth, she confesses, “you couldn’t find four people who make more disgusting food.”

Maclean’s is here to help. We’re armed with three simple recipes, for a soup, pasta and mussels. All require just one pot, minimal ingredients and extremely basic kitchen know-how. Our mission is to get these four students eating better fare than Stove Top Stuffing, pasta topped with ketchup, and Campbell’s cream of mushroom soup poured on top of a microwaved chicken breast, “Chicken à la King”: staple student meals from the 1990s. Surely times have changed.

Nobu Adilman, actor, writer, and one of the hosts of the Food Network’s Food Jammers, who graduated from Halifax’s Dalhousie in 1995, says, “It’s a matter of having only so many minutes in a day. You’ve got so much s–t flying at you and you don’t want to spend all that time on cooking. So you just eat to soak up the booze.”

Most students juggle full course loads, part-time jobs and extracurricular activities, which doesn’t leave a lot of free time to visit farmers’ markets, let alone plan a week’s worth of meals. Luckily, in downtown Toronto there are other options: “I don’t know if you saw the hotdog vendor across the street, but she’s going to be my best friend next week during exams,” says Aaron as he chops an onion. Dorin, who just finished an exam, ate cereal for his last three meals, while Tingting polished off an entire loaf of raisin bread yesterday: “Breakfast, lunch and dinner, just in my room,” she says. “I didn’t even use a plate because I was cramming: I had two assignments due.”

Bestselling cookbook author Bonnie Stern, who also runs a Toronto cooking school, has a brighter outlook on students’ eating habits. “They’re much more savvy than they used to be because of the Food Network. They love that feeling of making something—the excitement of it. It’s very cool now.” She ought to know: for the last 15 years her school has offered a university survival class for students leaving home for the first time. “They do have a short attention span so we try to just do one class and then pack it full.” One of the most popular recipes is an Asian-inspired salad dressing, named after her daughter Anna, “who went through all of university without eating a salad.”

Not all university students are clueless come dinnertime. Amanda Garbutt, 22, has been preparing meals since her first year at McGill University in 2006. “I would whip up something in the floor’s kitchen and no one else could even fry an egg.” Soon she was teaching her roommate basic kitchen fundamentals. “We’d buy identical ingredients and split the stove in half and she’d take the left side and I would take the right and we’d make identical meals.” Friends started coming over to watch. “They’d bring wine and it became a social event. And then I came up with BYOI, bring your own ingredients, and I would pick a recipe—a risotto, stew or soup—and assign everyone an ingredient to bring and it would end up being very cost-effective, and we’d all take turns stirring and chopping. It was fun.”

April Engelberg, also 22, met Amanda on their first day at McGill and came up with the idea of filming these sessions. The result was The Hot Plate, a show launched through TV McGill, the University’s student-run television station, in the fall of 2008. Engelberg and Garbutt, who graduated this May, are now developing The Hot Plate’s website, which features about a dozen instructional videos for simple dinners, and their cookbook, which comes out this month.

Like Stern, Engelberg has “noticed a massive trend toward students caring more about cooking. It’s cool to say last night I made risotto, and people are always taking pictures of their food and posting them.” Still, Garbutt says, “Some students go for the McGill pizza down the street. ‘Two bucks? I can do that for breakfast, lunch and dinner until I get scurvy.’ I actually know someone who got scurvy from a pure mac and cheese diet.”

Back in the Maclean’s kitchen, so far scurvy-free, we’ve hit a few snags. Tingting discloses that they don’t have a cheese grater. “I usually use a potato peeler,” she says. There’s also no measuring cup—no measuring device of any sort. More surprising is the absence of a colander from the kitchen of this pasta-loving group. “We use our hands,” says Tingting. “It’s not what you’re supposed to do?” When her three roommates cast steely glares in her direction, she adds, “We wash our hands first.” “Welcome to college,” says Aaron.

After they devour the leek and potato soup, which Tingting says “tastes like it’s from a restaurant,” the pasta is successfully drained, sans colander, and tossed simply with extra virgin olive oil, ricotta salata, cherry tomatoes and basil. “Mmm,” they hum. We do a second version with a handful of the arugula mixed in—a clever way to sneak a salad into a main dish. “I like it,” says Dorin, who’d earlier confessed to usually eating just meat. “I was skeptical. But it’s really good.”

The last recipe for curried coconut mussels, courtesy of Chatelaine, requires the most effort out of our three dishes—that is if you consider ripping out a few beards from the shells laborious. Not only are these bovines cheap (Chatelaine’s food editor, Claire Tansey, says they usually cost about two dollars for 250 grams) but they’re also high in zinc, protein and omega-3 fatty acids. Pair them with a buttered baguette and call it dinner.

The four students gather round two kilos of steaming mussels piled high in a stainless steel bowl; not an ideal serving vessel for hot food, but it worked in a pinch. They all like mussels, but this was their first time making them. It’s also the first meal these roommates have shared since moving in together this September, although you’d be hard-pressed to tell: as they dunk their bread into the sauce and devour dinner, they talk and laugh as though this were a typical evening. “We should definitely do this again next Friday night,” says Aaron. Mission accomplished.