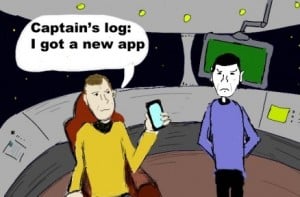 It’s exactly what it sounds like. Make sure to treat it like it’s big brother Wikipedia, which means background research but no direct citations. Or, if you don’t have Tetris on your phone, you can use it to play the ‘random article’ game. (It’s like a drinking game, except it’s mostly played by people like me, who spend time wondering whether the Millenium Falcon could beat the Enterprise.)

Have you ever wanted a less-annoying digital version of the naggy parent who reminds you about all your homework? myHomework is perfect for students who want to get more organized, or for students who like fiddling with their cellphones instead of working under the pretense of getting organized. Download this app and never forget another essay, reading, or upcoming test.

Good news, profs: not all of those students checking their iPhones in class are on Facebook. Thanks to CourseSmart, some of them might actually be consulting textbooks. Students can license e-texts for a period of time (usually about 180 days) for half the cost of the print versions. But as fun as it sounds to read “Biological Applications of Organic Chemistry” on your iPhone, there are a few drawbacks—namely, the small screen and the fact that you can’t resell or keep the books.

Dropbox helps you organize and synchronize files between your laptop, phone, and whatever computer you’re using in the library, allowing you to access your essay from virtually anywhere. It also serves as a backup for any important files. If your laptop is stolen, dropped, or spontaneously combusts, your thesis or exam notes won’t be stolen, dropped, or burnt along with it.

5. Your university’s app (if they have one). Many do, including UBC, Saskatchewan and Western.

Are you the type of person to obsessively calculate your new grade point average every time you get an assignment back just to prove to yourself that you’ll never get into medical school? If so, Grades 2 can help save you time, which would probably be better used studying anyway.

Considering the high cost of tuition and textbooks, lecture is a really expensive place to nap. But for students who can’t keep their eyelids open, Snoozerr lets you record lectures and listen to them later. If you happen to be awake, it also allows you to take and store pictures of the blackboard too.

Scott Dobson-Mitchell is entering the Master of Science program at Wilfrid Laurier University. He contributes to Future Campus each week. Follow @maconcampus. Like us on Facebook here.