9 ways to prepare for college or university

First year is two months away. Here's how to get ready. 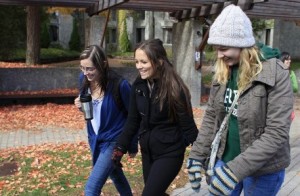 Hundreds of thousands of Canadians will be starting university or college a little over two months from now. If you’re one of them, you may be freaking out a little bit, so to help calm your nerves, here’s a list of things you can do to prepare, other than the obvious stuff—because you’ve already applied for student loans, paid tuition and picked your courses, right? Right!?

Most people will arrive not knowing anyone and that’s a good thing. It means the people living close to you will become a surrogate family for the first couple weeks of September. You’ll attend meals, football games and parties together. Then, like a real family, you’ll drift apart somewhat. But don’t worry. By then you will have made new friends in labs and group projects, at club meetings and on intramural sports teams, at parties and at the poutine shop at 3 a.m. Just give it time.

You need to bring pillows, sheets and a computer, but it’s no big deal if you forget nearly everything else. You probably don’t need a TV, a microwave or a fridge; many residences supply those. You won’t want too many groceries either, since you’ll prefer to be sociable by eating in the cafeteria for the first couple of weeks. For those who insist on packing wisely, here’s a list of suggestions.

3. Break up with your girlfriend/boyfriend.

University is about growing emotionally and intellectually, which requires exploring different kinds of relationships while still finding time for school. If you leave a lover in your hometown or at another school, you will miss them, yes, but if you stick with them, there’s bound to be drama and homesickness. Rather than hour-long Skype chats each night, wouldn’t you rather be out meeting new people? One delicate way to put it: “I think we owe it to ourselves to focus on school this fall.”

High school students think they’re going to have a lot of sex in university, but according to the recent National College Health Assessment (a survey filled out by more than 34,000 Canadian post-secondary students) most aren’t getting much action. One-third (32 per cent) of students reported no sexual partners in the previous 12 months. Nearly half (46 per cent) had only one.

5. Don’t worry if you’re not into drinkings/drugs.

If you’ve seen Spring Breakers, you may assume every college student is smokin’ blunts and doing shots, but that’s just not true. Only 16 per cent used marijuana in the previous month, according to the NCHA report. And while a little over two-thirds of students (71 per cent) drank alcohol in the previous month, not all got drunk. Half reported four or fewer drinks the last time they “partied.”

Are your parents supporting you? If so, do you know how far their generosity will stretch? If you’re getting student loans, do you know how much you’ll have left after tuition is paid? Figure out now much spending money you’ll have per day. If you know it’s, say, $20 per day, you can do mental checks to see whether you’re on track. Also consider these 5 money tips from Gail Vaz-Oxlade.

What better way to fit in than by proudly donning your campus colours, right? Wrong. No one except that weird Resident Assistant wears those gold and red socks socks after the homecoming football game. Save yourself $40 and embarrassment. You can always wear a red t-shirt.

The people who felt really important in high school are in for a huge shock in university/college. It’s much bigger and more diverse, so rather than falling into little cliques based on popularity, wealth or looks, most people make friends with those who share their interests, whether it’s field hockey or gaming, politics or medicine, Harry Potter or hip-hop. Which leads me of my final tip…

9. Get excited—it’s going to be a blast!

FILED UNDER: First Year Survivor what to expect in college What to pack for university