What students are talking about today (March 20th) 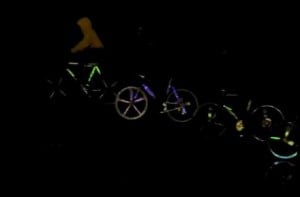 1. Students at the University of British Columbia celebrated cycling culture with electronic music and glow sticks at the UBC Bike Rave on Friday night. It was organized by student residence advisors and was funded by a community grant. Unlike the drug-fuelled all-night parties of the 1990s that inspired the bike rave, this one was, according to The Ubyssey, “good clean fun.”

2. A student writing in The Varsity at the University of Toronto reports that the stress seminar she attended is a sorry excuse for counseling. “I had hoped that this “Coping with Stress” workshop, run by U of T’s Counselling and Psychological Services (CAPS) would help me, but instead it left me frustrated and angry,” writes Amanda Greer. “After a hard first semester, I approached CAPS about meeting with a counsellor. I was told there was a four month waiting list and to start looking for other options.” She points out that despite much discussion about the mental wellness of Canadian students, including in a recent cover story in Maclean’s, students often can’t access the one-on-one counselling. It’s a shame, but I think the explanation is obvious: tight budgets.

3. Western University is mourning the loss of student Noah Kishinevsky, whose body was found in a parked car at a high rise in London, Ont. The cause of death has not been confirmed, “but a hazardous substance was found in Kishinevsky’s car,” reports The Gazette. Police told the student newspaper that there was “no foul play” and that they won’t release more details.

4. A commentary in The Griff student newspaper at MacEwan University defends Ohio University photography student Sara Lewcowicz, who witnessed a man beat his girlfriend and documented it with photos instead of intervening. The heartbreaking photos of Shane, 31, abusing Maggie, 19, were published in TIME. Rebecca Trites supports the young photojournalist, arguing that intervening can be dangerous and that the photo essay creates awareness of domestic violence.

5. Police arrested 45 people in Montreal who were demonstrating against tuition fee hikes on Tuesday, reports CBC. As usual, police immediately declared the demonstration illegal because organizers did not submit an itinerary in advance. Several of the protesters threw snowballs, and four were arrested for assaults on police, reports Radio-Canada. The hikes recently proposed in Quebec under its Parti Quebecois government are about $70 per year—much less than the $325 increase that was planned by former premier Jean Charest. Quebec students pay about $2,200 per year.