What students are talking about today (January 23) 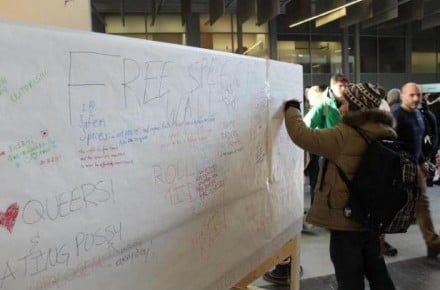 1. Seventh-year Carleton University human rights student Arun Smith has apparently not been in school long enough to learn that other people have rights to opinions that differ from his. After the “free speech wall” on campus was torn down, he posted a message to his Facebook wall claiming responsibility. “If everyone speaks freely we end up simply reinforcing the hierarchies that are created in our society,” it read. The display had been erected by campus club Carleton Students for Liberty and students were encouraged to write anything they wanted on the paper. Someone wrote “abortion is murder” and “traditional marriage is awesome.” GBLTQ Centre volunteer Riley Evans took offense, telling The Charlatan student newspaper that the wall was attacking those who have had abortions and those in same-sex relationships. Campus coordinator for the CSFL Ian CoKehyeng explained the purpose of the wall: “We feel that university is supposed to be an area of discourse and free thought, but it’s actually the opposite. We have less free speech on campus.” Looks like he may be right.

2. McGill University’s administration wants to disregard several Access to Information (ATI) requests from students, according to the McGill Daily. Not only that, it has also asked to “disregard future requests submitted by the respondents or students of McGill or student journalists of The McGill Daily and the Link (Concordia University) or by persons associated to McGilliLeaked or by persons that could reasonably be linked to such requestors,” under certain circumstances. The McGill Daily’s editorial board argues that this is a problem: “By asking to disregard ATI requests, McGill is attempting to remove one of the only avenues that journalists and students alike have to investigate the workings of their university.” Julie Fortier told CBC News, on behalf of the university, that 14 people are abusing the system. She notes that ATI requests jumped from 37 to 170 between 2011 and 2012.

3. You’ve probably heard of SeekingArrangement.com, the morally questionable website where “sugar babies” connect with “sugar daddies” who help them finance their post-secondary educations. The site just released a list ranking Canadian universities by the number of sugar babies who signed up in 2012 and it’s titillating news editors across the country. The top five, according to Metro News Edmonton, are: 1. Ryerson University (183), 2. University of Ottawa (179), 3. University of Toronto (156), 4. McGill University (148) and 5. University of Alberta (125).

4. Speaking of sex, a new study shows that “sex with an ex” is common among adults aged 17 to 24, reports LiveScience. A survey of 792 emerging adults in Ohio who had been in relationships within the previous two years showed that 44 per cent had gotten back together with an ex-boyfriend or ex-girlfriend. The researchers say it’s worrisome because young people may be more likely to have unprotected sex with an ex-partner who may have had unprotected sex with others in the meantime.

5. Paige Gorsak, writing in The Gateway at the University of Alberta, calls the Edmonton chapter of Men’s Rights Activists “a farce.” The local group says it’s concerned with “male circumcision, men’s reproductive rights, domestic violence awareness, antifeminism, misandry, chivalry and false allegations.” It’s the anti-feminism Gorsak takes issue with. The MRA links to the site avoiceformen.com, which “regards feminism as a corrupt, hateful and disingenuous ideology based in female elitism and misandry.” Gorsak says that the MRA spends more time attacking feminists than on “actual activism” and shouldn’t be taken seriously. “There’s a big difference between believing in your own values or championing free speech and going out of your way to hate on another group. These two aforementioned sites aren’t so much pro-men as they are anti-woman.”