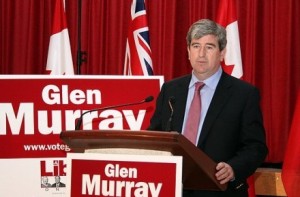 Ontarians are busy debating where the province’s three new post-secondary campuses should be, with mayors from Barrie to Niagara Falls holding out their caps. But ahead of that decision, Glen Murray, Ontario’s new Minister of Training, Colleges and Universities, says there all kinds of ideas he wants to explore first. Those who lust after future campuses should take note.

Here are 10 things I learned about the future of higher education in Ontario from Glen Murray.

1. Murray’s biggest concern “is how we’re utilizing the existing capacity we have right now.” He thinks more campuses should be using their physical resources year-round, by offering three-semesters, perhaps.

2. He’s exploring three-year degrees. Three, after all, is the standard in Europe and is increasingly common in Australia. The fourth year could be rolled into the Master’s, he says.

3. Murray knows that students’ “tolerance” for 500-person lectures delivered on physical campuses is waning. He thinks future courses will include more online delivery. “I think you’re seeing the build out now, in the next few years, of information technology and online learning at the kind of scale you saw with the expansion of the colleges in the 70s and 80s,” he says.

4. Murray thinks the government can help us use our time more wisely, perhaps by offering courses on commuter trains and coaches. “Working, looking after your family, often your extended family… it’s very hard to find time to upgrade your skills,” he explains.

5. Murray thinks new campuses should be catalysts for downtown revitalization. When he was mayor of Winnipeg, Red River College wanted to build on the periphery, but he insisted it be built in the Exchange District. “That triggered a renewal of that part of Winnipeg where the vacancy rate dropped from over 50 per cent to around 10 per cent and provoked a renewal of the City of Winnipeg’s tax base,” he says, and “it spawned a whole bunch of new enterprises, triggered a digital effects industry, and repopulated a whole bunch of heritage buildings.”

6. Murray sees a lot of struggling places aching for development in Ontario too. He notes that successful revitalizations of downtowns are already underway by Brock University in St. Catharines and by Wilfrid Laurier University in Brantford, Ont. He sees potential for such revitalization in cities like Hamilton, Ont. where downtown is “50 per cent parking lots.”

7. But he thinks rural Ontario can’t be overlooked. “The problems of Dryden, Cornwall, Lindsay, Sudbury or Goderich are not that different from the problems of large urban centres where mainstreets have declined and are bereft of businesses and activities,” he says. “We want to make sure we’re restoring small-town Ontario and using our public institutions to help rebuild main-streets of small communities.” While he says it’s premature to guess where the new campuses may be, that statement makes it seem less likely that all will be built in fast-growing suburban Toronto.

8. Murray says Ontario will bound into the future on the backs of the Gazelles, small knowledge-based companies that derive value out of high-tech design and intellectual property. “[Gazelles] are often perfect in the small retail buildings that make up the small streets of downtowns and they need connections to some sort of university or research facility,” he says.

10. Policy on the new campuses is coming in a month or so. In the meantime: “if universities are coming at me saying, look, right now we have X number of buildings and this kind of campus, we think we can use these assets to better serve our communities, but our new campus idea would add net new value by doing this, this and this,” says Murray, “that’s the type of thing I’m looking for.”