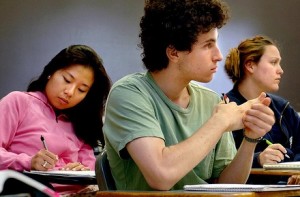 Perhaps it’s been a gradual shift, but this year I have noticed that students really aren’t taking notes like they used to. It’s especially noticeable among my first-year students, a great many of whom don’t seem to take notes at all, or who, I notice, write down things there is no need to write down and put their pens down at crucial times.

The benefits of taking good notes in class are many and, for the most part, obvious. Taking notes forces you to pay closer attention and helps keep you focussed when you might otherwise drift off. Notes force you to actually process what you’re hearing rather than simply let the lecture wash over you. And finally, of course, notes allow you to review the whole term’s material and show a mastery of all that material come exam time.

The lack of note taking showed up in my first year exams this year where an alarming number of students focused their answers on material we covered at the end of the term, even when material from earlier in the term was far more relevant. They were basing their answers on what they could remember from the last few weeks, not from a thorough review of the whole semester’s work.

Taking notes well means getting down the most important facts and ideas—not every word—in a way that benefits your studying as well as your in-class experience. Fortunately, note-taking has an elegant, but surprising secret. I hit upon it when I was an undergraduate and it took me to the top of my class. And now I share it with you.

Wait. What? Whole sentences? Surely some kind of point form or keyword system is better and faster? Surely whole sentences are a waste of time? Not so. Writing notes in whole sentences has two major benefits. For one thing, assuming your sentences are well-constructed, your notes will be comprehensible later when you come back to review them. Listening to a lecture on, let’s say, Edgar Allan Poe’s classic short story “The Murders in the Rue Morgue,”  and using a point-form system, you might jot down, for instance, “gothic horror story.” But when you come back to those notes months later, you’ll wonder what that means. And, indeed, you’re likely to conclude that “Rue Morgue” is an example of a gothic horror story. Except that’s not what your professor said. What she said was that Poe fashions a story that appears at first to be gothic horror, but then turns the convention on its head by giving the events a rational explanation. You need a sentence for that.

Writing notes in sentences has another advantage. It forces you to really think about what you’re hearing and relate the facts and ideas you’re hearing to one another in a logical way. That’s what sentences are, after all. Writing in point form, you can fall into the habit of simply jotting down a few words that you hear without ever understanding them, which defeats one of the points of note taking (see above).

Once you are used to writing in full sentences, you can try a more advanced technique: write your sentences using only two-thirds of the page, leaving a wide margin on one side (one aspect of the Cornell Method). Then, as you go along, you can make extra comments in your own margins (I used to put these in capital letters) to emphasize or clarify a point in the main body of your notes.

Before others accuse me of plagiarism, I should say that I hit upon this method on my own (somewhat to my surprise because I had always been taught to use point form), but I have since learned that there are other methods that call for full or nearly full sentences, so I do not claim the Pettigrew Method is entirely unique.

However, I do disagree with some versions of the “Sentence Method” which suggest the note taker uses a numbered list of sentences or writes sentences that aren’t actually grammatical sentences at all. I recommend organizing your sentences into paragraphs like normal prose so that the final product is a fully readable precis of the lecture.

Good note taking means a better in-class experience, a better understanding of material that you apply to assignments, and better materials to study. If you want to change one study habit this year, this is it.