A 2002-themed party causes one man to reflect on identity 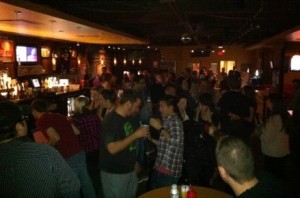 It all came back to Facebook, eventually. Twice during the night, someone apologized for deleting me from their list of friends. Twice I said I didn’t care. But I get it. It’s important, and especially so on that Saturday night. Facebook was, ultimately, the reason we were there.

The invite had been a long one, but the premise was straightforward enough, if slightly strange.

“Hello to my DEAREST friends… who have found themselves a DECADE older (or at least a few years older)!!” a Facebook invitation shouted at me sometime in October. “For many of you, 2002 marked a few big things in our lives. Possibly your high school graduation, as well as your first year at a post secondary institution. 2012 brings us 10 years from those days as innocent, uncorrupted youth to where we are now…a DECADE later.”

The invitation went on to explain that on a Saturday night in November, Carleton university’s campus bar, Oliver’s, would be open, with 2002 tunes playing, to all those who wanted to “celebrate this magnificent passing of time.”

Had it been a magnificent decade?

I would guess that those of us who did manage to make it to the bar Saturday night would argue we’ve learned a lot since those first days of university, dancing on the sticky floors of Oliver’s. At least two people in the crowd are currently teaching others who are not much younger now than we were then. And something we’ve all definitely learned in the last ten years is a new way to communicate, as well as learning how that might be changing us. How Facebook (and, perhaps, other social media) ultimately affects society will, for better or worse, end up being one of the great questions of this generation. Who are we, the people sitting at the computer, or the image we carefully construct online?

Even before Facebook premiered in 2004, at about the halfway point of most of those undergraduate careers that brought us to Carleton in the first place, “digital technology was enabling our tendency for isolation, to an unprecedented degree,” Stephen Marche noted in the Atlantic in May. “Back in the 1990s, scholars started calling the contradiction between an increased opportunity to connect and a lack of human contact the ‘Internet paradox.’” Together but isolated. Real but manufactured. Tactile but abstract. A generation of split personalities, depending on the interface. Is this why this reunion was happening? What was this invitation, if not but a cry from a corner of the internet to remind many of us that we used to see each other and not just the information we chose to publish about our lives?

“It’s a lonely business, wandering the labyrinths of our friends’ and pseudo-friends’ projected identities, trying to figure out what part of ourselves we ought to project, who will listen, and what they will hear,” Marche wrote.

So, how do we react to what a friend described to me as “post-post modern atomization” – this apparent isolated identity building, done in a weird kind of seclusion. How do we get back to the reality we thought we once knew?

Back in 1977, during what seemed like almost an aside to another answer, Marshall McLuhan told TVOntario’s Mike McManus that, as far as he saw it, “one of the big parts of the loss of identity is nostalgia. And so there are revivals on all hands, in every phase of life today, revivals of clothing, of dances, of music, of shows, of everything.”

Saturday night was a revival night. The playlist for the evening had been determined by suggestions left on the Facebook event wall. There was a recommendation that everyone should try to dress as they did in 2002, but looking around on Saturday, it wasn’t clear whether anyone had taken that to heart. In the last ten years, Oliver’s underwent a substantial renovation, and though most seemed to agree that the cosmetic changes were good, one couldn’t help but notice the bathrooms still smelled the same as they did a decade ago. A few people, including myself, made passing comments about having stuff to do Sunday, and would have to watch how much they drank. Of course, many of us were still there when the lights came on at 2 am over the new dancefloor. On Sunday, pictures from the party filtered onto Facebook pages – the modern mark of any successful event. There we were, doing that, preserved forever on the internet.

During university I briefly lived with a guy who gained a reputation for being the first person to take his shirt off during a night of drinking, pretty much no matter where he was. His name is Dave. He was at the bar Saturday night. I’m not sure when it was that I had last seen him, but probably sometime around the beginning of 2006. We spoke briefly about our lives and jobs, and I bought him a drink. We haven’t been Facebook friends for a while.

A little while later, the DJ started playing Rick Springfield’s “Jessie’s Girl.” On the dancefloor, Dave wailed on some air guitar. A short time after that, he was shirtless.

We live by the revival, McLuhan said. “It tells us who we are or were.”

Colin Horgan is an Ottawa-based reporter for iPolitics.ca. He also writes about culture, politics, and the NHL for the UK’s Guardian.