A year on campus we'd maybe rather forget 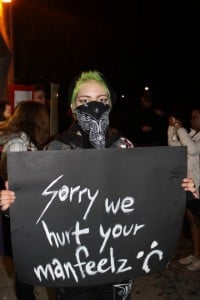 The five most-discussed topics at Maclean’s On Campus in 2013, listed below, suggest a year many of us would rather forget. Still, there were a few hopeful signs, so let’s be optimistic and toast to a 2014 where more graduates are hired, more students feel safe and free speech prevails. Cheers to a better year ahead.

A Maclean’s cover story in January called recent graduates “The New Underclass” because so many were working at low-wage service jobs, unpaid internships or in a series of contract positions. They weren’t exactly roughing it (almost half lived with parents) but nonetheless felt demoralized and worried about ever being able to afford houses, children or retirement. Maclean’s also found that doctorate degrees and master degrees no longer protected even the most highly educated people from unemployment, although health care training did still seem to be almost a sure bet. We also showed how most degrees in Ontario continued to lose value in recent years with a couple of exceptions: engineering and computer science. There were also a few more positive signs. We published the narrative of a student who muddled through as a ditch digger and security guard after his B.A. until he found a better job. We also told the story of how a graduate who begged for a work with the words “NEW GRAD NEED JOB” written on a piece of cardboard went on to create a company with $500,000 of seed money. The increasing support and success for entrepreneurial students and grads was one of the most hopeful signs.

Frosh week was marred by “rape chant” scandals at Saint Mary’s University in Halifax and the University of British Columbia in Vancouver where new students were encouraged to recite vile slogans making light of rape. Some saw this as evidence of a pervasive “rape culture” in which sexual assaults are acceptable. Maclean’s contributor Todd Pettigrew disagreed, arguing that blaming society is unreasonable because rape is widely condemned and, besides, the individual rapist is at fault. In her investigation The real danger for women on campus Anne Kingston shared research showing most campus assaults don’t stem from “mixed signals” or “dates gone bad” but from a small number of serial predators who have raped an average of six times by their early 20s. UBC police haven’t yet caught a serial sex offender who attacked several women this fall, spooking many on that campus. Meanwhile, Maclean’s contributor and UBC student Vivien Chang reported on her 32-minute wait for an escort from Safewalk, one of the main programs universities point to when assuring parents their children will be safe.

Following a spate of suicides in 2012, Maclean’s declared a campus mental health crisis. 2013 turned out to be the year students took action. Some focused on reducing the stigma against seeking help by sharing their stories, one after another, on Facebook “confessions pages” and in student newspapers. Susannah Feinstein’s narrative about navigating an inadequate campus mental health system at McGill was one of our most shared stories. There were also examples of student groups tackling the issue. The Brock University Students’ Union, for example, held a Wellness Week in November where they offered free therapy dogs, free massage therapy, dollar breakfasts and other events that showed students they’re not alone and that there are ways to cope. Other student unions won fall reading breaks which they had promoted as a way to reduce stress and anxiety. Still, few are under the illusion that this problem is going away. The biggest ever survey of Canadian students’ health found that nearly nine in 10 undergraduates felt “overwhelmed by all they had to do” at some point in the previous year while 57 per cent “felt overwhelming anxiety” and 38 per cent “felt so depressed that it was difficult to function.”

Men’s rights groups (or men’s issues groups), made up mostly of those who felt aggrieved by feminism or family law, spread to cities across Canada and some groups became official campus clubs. At the University of Toronto, a men’s issues group faced protesters who pulled fire alarms when they hosted a talk by anti-feminist University of Ottawa professor Janice Fiamengo. After a similar event had been shut down by protesters the previous fall, the university made sure to uphold its commitment to free speech and, instead of shutting it down, the protesters who attended used the Q&A session to challenge the speaker. Student unions, however, were less amenable. The Canadian Federation of Students passed a motion telling all student unions to outright reject men’s rights groups because they promoted “hateful views toward women” and justified physical and sexual assault. The CFS-affiliated Ryerson Students’ Union denied group status to a men’s issues group. And in Edmonton, an off-campus group co-opted an anti-rape poster campaign called “Don’t be that guy,” where the messaging included slogans like, “Just because she’s drunk doesn’t mean she wants to f**k… Don’t be that guy.” They put up posters at the University of Alberta that said, “Just because you regret a one-night stand doesn’t mean it wasn’t consensual…. Don’t be that girl.” Unsurprisingly, the anti-rape campaigners were disturbed.

The year began with students at Carleton University debating whether to keep or ditch the CFS, a national lobbying group they pay fees to each year. Things heated up in the spring at the first of two annual general meetings when a group of students demanded to know more about how the $3.4-million budget was spent. While the organization shared their budget with a blogger, they voted down making it available on their own website. One common concern was that the CFS was spending large sums on suing local student groups that had tried to cut ties. One group that tried to leave was the University of Guelph’s Central Student Association, which held a referendum in 2010 and found 73 per cent of students supported leaving. This year, a CFS-friendly Guelph executive switched sides and decided to drop its bid to leave. Administrators stepped in and asked students what they thought. Once again, more than 70 per cent wanted out. The CFS faced a protest at its second annual meeting in November from other student groups that wanted out. Things also got ugly when the new student union president at the University of Manitoba was targeted by an anonymous Tumblr site showing sexist social media comments he had made in the past. He said it was retaliation because he had recently criticized his predecessor for signing a contract to buy agendas from the CFS. That predecessor had gone on to work for the CFS. She denied knowing who put up the site.

FILED UNDER: looking back