What students are talking about today (December 28th) 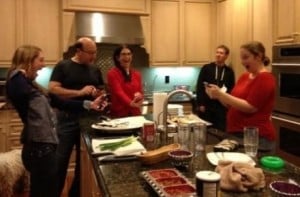 1. Randi Zuckerberg, the sister of Facebook co-founder Mark Zuckerberg, was upset that a Facebook “friend” shared a family photo (including Mark) with the entire internet. “Digital etiquette: always ask permission before posting a friend’s photo publicly. It’s not about privacy settings, it’s about human decency,” Zuckerberg Tweeted after Callie Schweitzer shared the snapshot with more than 39,000 followers. Schweitzer deleted the photo, but that didn’t do much good. Facebook has done more to make our “private” photos public than any other site, so countless Internet users felt schadenfreude that the founder’s family’s privacy had been breached. You can see the photo here (and many other places). Does this mean I have no human decency either?

2. Nathan Weaver, a student at Clemson University in South Carolina, wanted to figure out the best way to assist turtles in crossing the road, so he put a real-looking rubber turtle in the middle of a busy street near campus. In the next hour, seven drivers intentionally ran over the turtle and several more looked like they tried to hit it. About one in 50 hit the turtle. It takes turtles several minutes to cross roads, so evil humans could be the reason turtle populations are declining.

3. Mothers Against Drinking and Driving Canada (MADD) wants police officers to screen drivers for drugs using saliva tests when they conduct their roadside checks for impairment. A Western University law professor hired by MADD agrees. Prof. Erica Chamberlain says that one-third of fatally-injured drivers test positive for drugs, but police lay only about 900 charges annually for driving on drugs—a small fraction of the 60,000 drunk-driving charges laid. Drug tests Chamberlain saw used in Australia detect THC (the high-inducing ingredient in marijuana), methamphetamine and more. Not everyone agrees that police should have the right to test thousands of law-abiding people just to catch a few criminals, but I wouldn’t be surprised to see MADD win this argument.

4. Halifax’s new police chief wants all nightclubs stop serving alcohol at 2 a.m. instead of 3:30 a.m. because he says it would cut down on booze-fuelled late-night violence and policing bills. One-third of 2011 weekend assaults in Halifax’s drinking area occurred between 3 and 4 a.m. Research also backs up the police’s assertion that it could lead to less violence: a study from the journal Addiction showed that an extra hour before last call increased violent incidents by 16 per cent.

5. There are accusations of financial mismanagement, big and small, at Ontario universities this week. York University alleges that a former top executive received about $250,000 worth of home improvements in a widespread phoney invoice racket that the university says involved 18 people and around $1 million. Lawyers say the scheme was masterminded by Michael Markicevic, a former assistant vice-president, who, they say, used York construction materials and workers to fix up his two homes. York carpenter Jack McCann, former president of Canadian Union of Public Employees Local 1356, says that he gained up to $30,000 from working on Markicevic’s house. He says he agreed for fear of losing his job and to avoid verbal abuse. Markicevic denies the allegations.

Meanwhile, the McMaster Association of Part-Time Students (MAPS) is under investigation for “lavish spending,” according to the Hamilton Spectator. The student union was denied a request to increase its annual take from 4,000 part-time students by 43 per cent this year. Yes: 43 per cent.