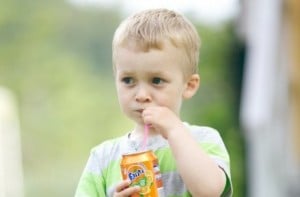 A couple of University of Alberta researchers looked closely at the nutritional habits of 1,800 Edmonton-area preschoolers and they found some disturbing things. They found links between soda intake and poverty, as well as between soda and screen time. From UAlberta.ca:

– 54.5 per cent of preschool-aged kids from poorer neighbourhoods drank at least one soda per week compared to 40.8 per cent for kids in higher-income areas
– 54.6 per cent of kids who watched TV or played videos games more than two hours a day drank at least one soda a week
– Children from lower-income areas were more likely to eat junk foods like chips, chocolate or candy.
– Kids who attended daycare, preschool or kindergarten were significantly less likely to eat junk.

Researchers found that just 30 per cent of children ate enough fruits and vegetables, and 23.5 per cent consumed the recommended amount of grain products. The same problem did not exist with milk and meat or alternatives—a respective 91 per cent and 94 per cent of kids got enough.

Co-author Kate Storey says the results suggest a need for targeted education about food choices, but notes neighbourhoods and the types of foods available also may be factors in family diets.

The studies were published in the August issue of Public Health Nutrition and the summer edition of the Canadian Journal of Dietetic Practice and Research.