Roughly 100 show up despite snowstorm 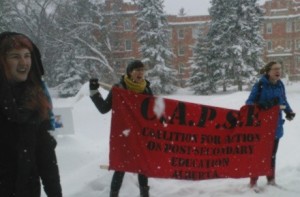 A massive blizzard made Edmonton’s road conditions miserable, but University of Alberta students still managed to make it to campus on Thursday afternoon to protest Alberta’s recently announced cuts to post-secondary education.

A flash mob of approximately 100 students formed in the main quad and marched against the 7.3 per cent provincial government funding cut. The protest was organized by the Coalition for Action on Post-Secondary Education (CAPSE), a student-run organization formed to retaliate.

Several students from CAPSE led the large protest in and out of high-traffic buildings. In the midst of students chanting, “no ifs, no buts, no education cuts,” and “they say cutbacks, we say fight back,” several students quietly made small talk about how these cuts may affect their futures.

Rebeka Plots, a second-year political science major, says she’s protesting for a variety of reasons. Aside from the possibility of the university adding even more non-instructional fees next year, she’s concerned for the quality of her education.

“I’ve already had some of my classes for next year cancelled due to the budget shortfall. I’m worried that this could eventually lead to the university cancelling some departments they don’t feel are important enough,” she said. “Professors and administration staff are also going to lose their jobs because the university can’t afford to keep them. All these factor into the quality of education.”

As the protest weaved in and out of buildings, Plots said that she doesn’t believe the university is acting in the best interest of students. She says the Student Union’s non-partisan stance and president Indira Samarasekera are not helping them get the educations they deserve. “She could be more vocal with the government when expressing her concerns,” Plots said of Samarasekera.

Plots says this won’t be her last protest. “I’d like to be optimistic that Premier [Alison] Redford will review the budget, but I think that these protests are a great way of getting the message across that we as students will not sit down and take this.”

In their final address back at the quad, CAPSE representatives confirmed the group will lead more protests. They left attendees with a simple assurance that, “this is only the beginning.”

Ravanne Lawday is a second-year student at the University of Alberta. She’s a regular contributor.