Are municipal elections a student issue? 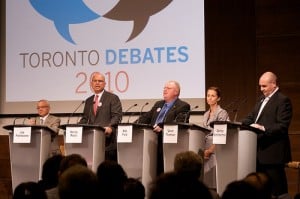 For months, Toronto has been rapt in the rhetoric of its upcoming municipal election and the fervor’s only escalating as the October 25th D-Day draws nearer. The most recent poll shows Rob Ford, the outspoken Etobicoke councillor who’s turned the phrase “gravy train” into everyday vernacular, has a commanding 24-point lead over next-in-line George Smitherman. And that lead has many Torontonians worried. Ford has come out swinging against wasteful spending at City Hall, promising to slash the numbers at City Council from 44 to 22, abolish the city’s fair wage policy, end the war on cars and a plethora other pledges that have left some residents panicked and running for the hills (quite literally). Toronto Star columnist Heather Mallick bizarrely equated voting for Rob Ford with some sort of post-drunken-one-night-stand venereal disease, while others have hopped on an “Anyone but Ford” bandwagon, rallying to stop the privatization-pledging maniac before he ruins Toronto’s national and international reputation.

Then, Wednesday, a new campaign was launched with the help of the Ontario branch of the Canadian Federation of Students. The One Toronto campaign, as it calls itself, alleges it will not be telling voters how to cast their ballots, though the message is clear even to the most credulous Toronto voters; keep the Toronto Transit Commission (TTC) public, focus on arts and social infrastructure, invest in education, make Toronto more diverse—which all, loosely translated, means don’t vote for Rob Ford. If that wasn’t obvious enough, this line from One Toronto’s website makes it crystal clear:

Right now the debate is very negative, focused on what is wrong inside City Hall, and how to slash away the more and more aspects of city government. Shouldn’t we be engaged in a debate on how to ensure that City Hall plays the most positive role possible in our lives?

CFS Ontario chair Sandy Hudson was on hand for the One Toronto launch Wednesday morning. Along with former United Way chair Dr. Joseph Wong, Luminato CEO Janice Price and journalist Michele Landsberg, Hudson took to the mic for the inaugural presentation. Hudson’s address focused on voter disengagement among city youth, an old but unyielding problem at all levels of politics.

Estimations of voter turnout show that just 43.8 per cent of Canadians aged 18 to 24 voted in the 2006 general election, up from 37 per cent in 2004. Though the numbers improved in 2006, youth turnout at the polls was still 19 percentage points below the national average. With youth apathy also a major factor at the provincial and municipal levels, strategists have created campaigns such as ApathyIsBoring.com and Student Connect to get young people interested in what’s going on in government. There have been other, more eccentric efforts made by our neighbors down south, including Sean “P. Diddy” Combs’ 2004 “voting is cool” campaign, which curiously equated apathy with preemptive mortality (“Vote or Die!”) and Rock the Vote’s efforts to get young Americans to the polls during the 2008 presidential elections.

The logic behind these movements is clear; politicians won’t take youth issues seriously if they don’t show up to the polls. Why waste time lobbying to a demographic that is unlikely to go out and vote?

The problem is: One Toronto isn’t a campaign to get young people’s voices heard. It’s a pluralistic movement pushing a specific yet holistic vision for the city. In an interview with the Toronto Star, Hudson justifies the allegiance saying, “Students are paying lots and lots of money to go to school, so they need services that are going to be saving them money, but also helping them to get around.”

Certainly services such as the discounted TTC Metropass for post-secondary students secured this year are to the benefit of students; but just because an issue like transportation sometimes affects students doesn’t mean union fees should rightfully be allocated to a multidimensional campaign like One Toronto. Indeed, I could argue that the worn out sole of my left shoe is a student issue if it makes me late for class, but I’d be hesitant to go spend someone else’s money on an entire clothing initiative.

Municipal issues are a tough sell for student union dollars. Tuition fees are a provincial issue. Professional licenses, to practice medicine or law for example, are federally regulated. City laws, on the other hand, dictate whether you pay five cents for a plastic bag at a grocery store—it takes a little bit of extrapolation to connect that to the larger student movement.

The added fact that One Toronto so obviously supports certain candidates over others (even if it won’t name names) makes the CFS backing that much more incredulous. Dare I say–an example of wasteful spending?