Are these classrooms really that bad?

Photos of disrepair on campus don't tell the whole story 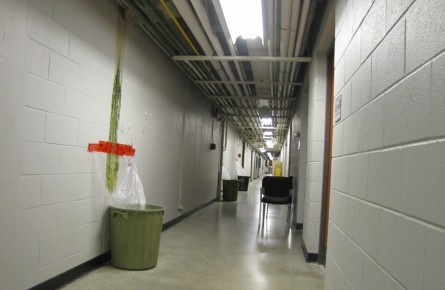 Every Monday I teach in a classroom that, I must admit, is not my favourite. It has a dusty old chalkboard (I know, chalk!), and several ceiling tiles are missing. A couple of the windows are caked with so much salty residue that one can barely see through them, and a fluorescent light is burnt out. There are two lecterns in the room and both are broken—though one has been hastily repaired with a piece of cardboard.

It’s just not a great room in which to teach.

So I get the motivations of a new generation of staff and students seeking to shame their universities into improving facilities. One prof at Hunter College in New York started tweeting pictures of holes she saw on campus and now has a blog called Holes at Hunter. A similar blog, Classrooms of Shame, seeks to draw attention to such “deplorable conditions.” In Canada, too, blogs like I heart SFU show similar pictures and a prof at Memorial University recently went public with complaints about mould and asbestos on his campus.

Certainly, such efforts are well meaning, and we must admit university infrastructure is important to our overall mission. But the photo-shaming blogs are unfair and don’t help the discussion.

For one thing, photos can only tell a limited spatial story. A close up picture of a hole looks bad, but it doesn’t tell you what the entire room looks like. One hole in a big room is one too many, but it’s not exactly shameful. Even I admit that my unpleasant Monday and Wednesday classroom is not a disaster. Overall, it’s clean, and bright; it has windows that open for fresh air, new blinds, and has just been equipped with state-of-the art monitors for video and slide presentations. But you wouldn’t have known that from my initial and limited description.

Photos also fail to tell the temporal story. Today’s hole may be repaired next week. Or the whole room may be slated for renovation next year. At Memorial, the prof with the mouldy office got moved to a new space, and the asbestos was quickly removed.

Nor does a single classroom tell the whole story. I make do with my imperfect room but am thrilled to be in a newly renovated office. Maintaining even a small university like mine is a constant battle.

And it is a battle that is being fought with few resources. Everyone knows that governments have been squeezing universities and when universities spend money there is always pressure, and understandably so, to put the money into salaries for teachers and librarians and not superficial things like paint and plaster. A common refrain around my school is that budget meetings shouldn’t involve those arguing that they need to buy more grass seed.

The answer, of course, is better funding from our governments, and I suppose one could make the case that blogs like the ones mentioned above could serve that purpose. But I doubt it. They tend to make the schools look poorly managed and irresponsible when most of them are probably doing the best they can. And there’s no shame in that.