Around the world in hazy ways

The joys (and frustrations) of teaching international students 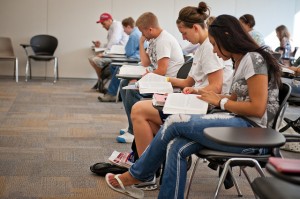 For most of my career as a professor I have taught literature courses, and as such, have had relatively little contact with international students. But recently, I have begun teaching more a basic composition designed for students in all majors, and, since international students tend to take (at least where I teach) business and science, I’ve met a lot more such students. And so I have begun to experience the many joys and occasional frustrations inherent in that particular mode of instruction. Like all teaching, it’s been a learning experience.

One of the joys has been getting insights into other languages. For instance, the large number of Saudi Arabian students at Cape Breton University has led me to start learning a bit about Arabic. This in turn has allowed me to make at least a few comments about the differences between Arabic and English in class, which, in turn, encourages those same Saudi students to engage more fully with the course material.

There have been some wonderful surprises. A few years ago I was teaching Milton’s Paradise Lost and was a bit worried that my international Muslim students might be baffled by that most Christian of poems. Au contraire! Like Milton himself, those students were used to living in a culture where religious questions were of the highest importance and were eager to know more about Christian belief and how it compared to their own.  The figure of Satan was particularly intriguing to them since Islam has a similar but not identical figure.

Interestingly, it’s sometimes easier to teach composition to international students, because they often have a better grounding in basic grammar, and deeply understand its importance. In fact, the grammar quizzes are where international students in my course do best. Chinese students seem especially diligent in this regard.

But sadly, some knowledge of basic grammar does not always translate into a real felicity with English, especially when it comes to writing. While students whose educational background is not in English are required to show proficiency through various tests before being admitted to university, many still manage to get enrolled without sufficient command of the language.

For some frustrated souls, even putting together a comprehensible sentence is a struggle. For many, it is clear that their conversational English is not even good enough to follow what I am saying in class. I now begin such courses by explaining that this is not an ESL course and that students must have a strong proficiency in English if they are to have any hope of doing well. But, of course, if they can’t understand what I’m saying, they don’t know that I’m telling them that they have to be able to understand what I’m saying.

Still, the joys mitigate the frustrations. One student in my current class has been urging me to come to Saudi Arabia and teach there for a while. I responded that I thought it might be too hot for me. He insisted that not all parts of the country were that hot, and when I seemed unconvinced, he dug up a picture of a place in the northern part of the country where it had snowed.

It snows in Saudi Arabia. I’ve learned something new.