Are students getting gouged? 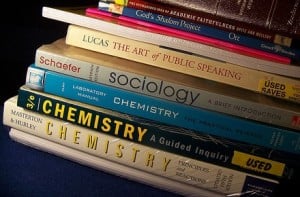 The outcry from a group of first-year students forced to buy an expensive art history book that has no art in it has focused attention on an issue as perennial and seemingly as intractable as fall back-to-school jitters: the cost of college and university textbooks.

Most everyone agrees textbooks can be a significant financial burden for students and their parents but there’s less agreement on what can or should be done to bring the price down.

“Many students are paying upwards of $1,000 per year for textbooks,” said Jessica McCormick, deputy chairwoman with the Canadian Federation of Students.

“That is another financial burden that adds to the debt that is sinking this generation.”

Students, already paying thousands of dollars in tuition, blame publishers for gouging them.

Professors argue student readings are essential, and say there’s little they can do.

“A large proportion of the material that students need for a proper university education is only available through either commercially published books or journals,” said Jim Turk, executive director of the Canadian Association of University Teachers.

“In terms of textbooks, there aren’t a lot of good options available.”

Turk, whose association speaks for faculties at 124 colleges and universities across Canada, said he understands why the cost of textbooks for highly specialized courses with tiny markets might be high.

“There are textbooks that sell tens of thousands of copies — in first year psychology, economics or sociology courses — where the size of the market would suggest that the prices could be a lot lower than they are.”

What’s not appreciated, publishers argue, is the effort — and by extension cost — required to create a good textbook and get it to market.

“The prices of textbooks have gone up dramatically, and in many years faster than inflation — from a consumer’s point of view, it is shocking,” said Ferrier, a father of three university students.

“I’m not saying there have not been excesses in publishing just like any other business (but) I just don’t think that publishers are always in the wrong.”

Ironically, student efforts to defray book costs — such as buying and selling used — may have pushed publishers into revising content unnecessarily as a way to hike demand for new editions by forcing quick obsolescence.

“There’s absolutely some truth to that — certainly in the past — less so now,” Ferrier said. “That’s a reflection of the shrinkage of the market opportunities.”

Students also want professors to be more diligent when prescribing books, and to be aware of the costs.

The Ontario College of Art and Design argued it was mindful of cost when prescribing the $180 art history textbook that has blank spaces instead of pictures — students have to find the art online.

The alternative would have been a book with art costing $800, the school said, an explanation that smoothed few feathers.

The ideal solution, McCormick said, would be government-subsidized textbooks.

“In a lot of ways, textbooks and post-secondary education in general in Canada need to be treated as a public service rather than as a commodity,” McCormick said.

Ultimately, however, the steep growth in digital publishing may render much of the price debate moot — or at least mute the volume of complaints.

Ebooks eliminate paper and printing costs. They can be updated continuously and cheaply. They cut out middlemen such as bookstores with their markups of 20 to 47 per cent.

As a result, virtual textbooks sell for significantly less than their hard-copy counterparts but can still offer viable returns to publishers.

In fact, Ferrier predicts the demise of the traditional textbook industry, saying only publishers who move into the digital world will survive.

Students, however, fret that digital editions aren’t a panacea because publishers can put “locks” on them and they have no resale value. Turk points out that publishers still get to set a price that may be exorbitant.

Ferrier, however, said publishers need to make money to stay in business.

“People do have to understand the economics of it — we all have families to support,” Ferrier said.