At least 41 arrests in Montreal protests

Thousands of students on strike 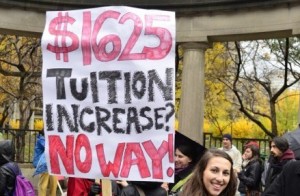 Montreal police arrested 37 protesters early Friday morning after they broke into and vandalized a college, the CEGEP du Vieux-Montréal.

The late-night vandalism came after four arrests and the release of pepper spray on Thursday as protesters blocked access to the Montreal stock exchange and a nearby hotel, reports 680 News.

Thousands of post-secondary students are striking in Quebec. They’re skipping classes in order to protest a tuition hike of $1,625 over five years that begins this fall.

According to organizers from Free Education Montreal, the hike “would deny 30,000 students from low-income families and other socioeconomic groups their right to education based on merit.”

The Conference of Rectors and Principals of Quebec Universities (CRPQU) supports the increase. They argue that quality is at risk without higher tuition. Quebec’s gross provincial debt was $173-billion at budget time last March, so the government is unlikely to be able to provide more funding.

Concordia University spokesperson Chris Mota told The Link newspaper that a student strike, even if prolonged, would not change the university’s routine. “It will be business as usual… Professors will continue to teach and students will be expected to attend classes; all academic requirements of a course remain valid and students are expected to fulfill them,” he said.

Large student demonstrations that lead to clashes with police are common in Quebec. In January, a Montreal police officer was accused of brutality after his actions were caught on video.

Last fall, an estimated 20,000 protesters turned out for peaceful demonstrations against tuition, but last March, a demonstration turned violent. Five arrests were made after at least one person was injured at a protest outside the offices of the CRPQU.

Recently, a pamphlet circulated calling on students to sabotage, vandalize and kidnap in order to stop the tuition rise. With 37 arrests, it looks as though some have heeded the call.