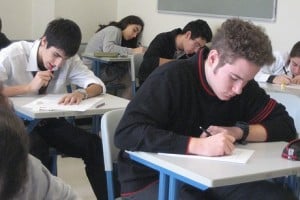 Two men in Richmond, B.C. are charged with six offences each, including theft, after one helped the other to cheat on his Medical College Admissions Test (MCAT) in January, according to CBC News. Police say that Josiah Miguel Ruben, who was at the University of British Columbia in Vancouver, used a pinhole camera and a cell phone to transmit answers to co-conspirator Houmam Rezazadeh-Azar, who was writing the test in Victoria, B.C. and sending photos of the questions.

Police say that Ruben was getting the answers from three students who had been told they were taking a test for a job as an MCAT instructor. It was those students who became suspicious and alerted the police after they found it odd that they were presented with low-quality images of MCAT questions and one of them discovered online that MCATs were being held elsewhere that very minute. Cell phone records showed that Rezazadeh-Azar was in contact with Ruben the entire time.