Robot will help us understand how planets evolve 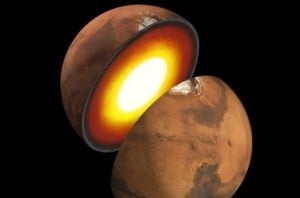 As NASA’s Curiosity rover beams back photos of the rocky surface of Mars, another group of scientists, including one from British Columbia, is preparing the next mission to uncover what’s underneath.

Prof. Catherine Johnson, of the University of British Columbia, is among the scientists whose project, named Insight, was selected by NASA this week as part of the U.S. space agency’s Discovery program, which invites proposals from within the scientific community.

Insight will send a stationary robotic lander to Mars in 2016, drilling down several metres into the surface as it uses a combination of temperature readings and seismic measurements to help scientists on this planet learn more about the Martian core.

What they find, explains Johnson, will offer not only a better picture of how Mars has evolved in its 4.5-billion-year history, but it will also add to scientists’ knowledge of how other planets, including Earth, form.

“When we think about the astronomy world, we now know about many other planetary systems in the universe, and yet we don’t know what the basic structure of Earth and the Earth’s neighbours are. It’s really what should be on page 2 or 3 of the textbooks in order to be able to understand the Earth.”

The Insight lander is expected to launch in March 2016 and touch down on the red planet in September of that year.

A seismometer will measure seismic and tectonic activity such as quakes on the surface, while a probe will drill down five metres into the ground to take temperature readings.

Johnson will be among the scientists analysing the data, which she says will be used to determine the size of the Martian core, its temperature and its composition — that is, how much of it is solid and how much is still liquid.

Currently, scientists can only speculate on what’s below the surface of Mars, but Insight will help confirm whether those guesses are accurate.

Their conclusions will offer more information on what happens in the early stages of a planet’s history, says Johnson.

“This experiment tells us about the end result of the very first stage in planetary evolution — what happens after you have a big lump that’s a mixture of rock, metal and a bunch of gasses,” she says.

Johnson also wants to determine when Mars had a magnetic field — and when it lost it.

Scientists believe Mars had both an atmosphere and a magnetic field until about 3.8 or 3.9 billion years ago, but they don’t know exactly when they disappeared or why.

In particular, Johnson wants to know which vanished first. In other words, did the atmosphere disappear because there was suddenly no magnetic field, or was it the other way around?

The Insight mission will be run by the Jet Propulsion Lab in California. The mission’s costs are capped at US$425 million, measured in 2010 dollars.

Johnson is currently working on another NASA Discovery project, the Messenger mission to Mercury.

That mission sent an orbiting spacecraft to the solar system’s smallest planet, arriving last year. It took more than six years for Messenger to complete the 7.9-billion-kilometre journey.