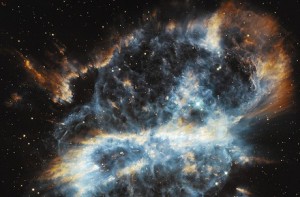 Construction has begun on a new radio telescope in British Columbia’s south Okanagan that will act like a type of time machine and help astrophysicists travel back to better understand the composition of our expanding universe.

The $11-million project is being built at the Dominion Radio Astrophysical Observatory southwest of Penticton, B.C., and will use components from the cellphone industry to capture and turn radio waves emitted six to 11 billion years ago into a three-dimensional map.

“It’s almost like time travel,” said Kris Sigurdson, an astrophysicist from UBC and co-investigator on the project. “It’s looking back into the past and how the universe was at that time and it’s just amazing.”

Sigurdson said scientists know the universe is expanding but they don’t know why, and they’re also trying to learn more about the composition of “dark energy,” which makes up about 70 per cent of the universe.

According to a UBC media release, the project is known as the Canadian Hydrogen Intensity-Mapping Experiment and will eventually boast a 100-square-metre collecting area filled with 2,560 low-noise receivers built from components adapted from the cellphone industry.

Mark Halpern, an astrophysicist from UBC who is also the project’s principal investigator, said a NASA project known as the Wilkinson Microwave Anisotropy Probe (WMAP) found the universe has expanded by a factor of 1,000 in every direction since the light we currently see was given off.

Halpern said the radio telescope will collect information in the northern half of the sky, from the equator north, specifically related to the universe when it was one-third to one-half of its present size.

“I think people have always wanted to know how did the universe begin,” said Halpern. “Why is it the size and shape that it is? Why is it so big? How did it ever get to be this old?

“I’m not saying we’ll answer it, but we’re moving that way.”

Gary Hinshaw, an astrophysicist at UBC and a co-investigator, said workers have now cleared snow from the site and started on the foundation holes for a “pathfinder” telescope, a smaller instrument about 40-by-35 metres in size.

Workers will put in the concrete footings and erect the trusses next week that will support the telescope, he added.

Hinshaw said scientists will build a radio telescope next year about 100-square-metres right next to the pathfinder.

“We’re going to be getting our feet wet with the pathfinder, starting right now, and building on that to make the full-size one, which I think we’ve been saying is about the size of six hockey rinks,” he said.

Hinshaw said scientists will place receivers on the pathfinder, making a “plausible version” of the full instrument.

Doing so will help scientists make sure the components works well in the environment and are as sensitive as they should be before all the equipment is ordered, a “kind of try-before-you-buy approach,” said Hinshaw.

The Canada Foundation for Innovation has contributed $4.6 million towards the project, and while many of the scientists have participated in other international products, they are proud of the work that’s underway.

“Canada has been very, very effective in astronomical research but this is a standalone, entirely important Canadian experiment and we’re proud of that,” said Halpern.