B.C. student on the hunt for Morgan Freeman 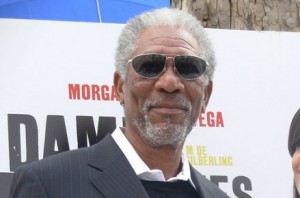 Ian MacDougall’s cross-border odyssey to track down one of Hollywood’s premier heavyweights may have turned him into a short-term online sensation, but continues to prove that brushes with true stardom are far more fleeting.

Months after the 22-year-old film student teamed up with a friend to convince Morgan Freeman to narrate a class project, he’s still chasing the goal that sent him on his madcap adventure in the first place.

MacDougall plans to devote part of the upcoming year to sifting through the hours of footage he gathered last April on his quest to track Freeman down. He and collaborator MacKenzie Warner are ultimately hoping the 20-minute short film they cobbled together in less than a day can be turned into a full-length documentary, ideally featuring a voiceover from the film industry’s consummate narrator.

“I think we really have a solid story regardless of whether Morgan does sign on in the end,” MacDougall said in a telephone interview from Barcelona, Spain. “I’m looking forward to just being able to show it.”

The story began unfolding a week before MacDougall was slated to hand in his final project for a film course at Simon Fraser University. A hard drive crash wiped out an entire year’s worth of work on the film he planned to present just seven days before the scheduled screening.

In a panic, the Yellowknife native called Warner, who had once floated the idea of preparing a documentary on the process of tracking down Freeman and getting the A-list star to narrate the details of the hunt. Classmates had dismissed Warner’s idea out of hand, but MacDougall felt desperate times called for desperate measures.

Through some online detective work, the friends discovered Freeman was scheduled to be the master of ceremonies at a blues concert in Clarksdale, Miss., two days after MacDougall’s hard drive bit the dust. The pair booked tickets to the show, maxed out MacDougall’s credit card on last-minute flights and headed to the deep south to find the star.

Luck smiled on them through most of their travels. A friendly fellow flight passenger hooked them up with a ride to the small town. Some local hotel owners gave the students a steep discount on their accommodations. But luck ran out when MacDougall and Warner missed connecting with Freeman by seconds at the end of the show.

The cycle repeated itself again the next day when they heard rumours that the Shawshank Redemption star was still in town.

The information was accurate, but the star slipped through their fingers yet again. This time, however, MacDougall and Warner convinced his business partner to track him down on the phone, where he referred future inquiries to his agent.

MacDougall and Warner had to take care of the school assignment first and devoted their immediate energies to paring down their footage into something they could screen for the class, but Freeman’s words lingered with them after the film was handed in.

Three days after airing their makeshift short, MacDougall was on the road again, this time bound for Los Angeles to contact Freeman’s agent in person.

In some senses, lightning struck twice. MacDougall narrowly missed his quarry in person, but secured a meeting with his assistant and even managed to connect with the agent by phone.

That conversation, too, had highs and lows. The agent expressed skepticism that the project was little more than a publicity stunt meant to exploit Freeman, MacDougall said, adding the frantic travel pace and ensuing sleep deprivation had given him qualms of his own.

“I didn’t feel like we were really overstepping our boundaries, but I guess I was questioning the morality of it in pursuing this guy if he doesn’t want to be pursued,” he said.

Eventually, though, MacDougall was able to allay most of the agent’s concerns and secure his agreement to at least view the final product.

MacDougall plans to focus on getting it ready when he returns from some overseas travel, with the aim of having a full-length documentary ready for presentation later this year.

After that, however, he has to come full circle. All the hype over the Freeman short wasn’t enough to persuade MacDougall’s professor to accept it for his final grade.

He was pleased with the effort I’d put into at least making something… but I wasn’t marked on the project because I basically have to re-edit the one that was lost.”