Back off my Darwin Fish 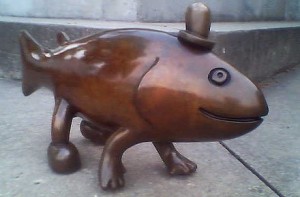 Many years ago, a colleague of mine showed me his Darwin Fish, a little plastic fish made to look like the Jesus Fish stick-ons that were popular at the time among Christians. Remember when Puddy had one on Seinfeld? Except that the Darwin Fish says DARWIN instead of JESUS and, wait for it, has little feet on it. Get it? The fish is evolving? Anyway, I thought it was hilarious and a few months later, he gave me one as a gift. It is in my office to this day, on top of my thermostat.

These kinds of things fade into the background, so I don’t think about my Darwin Fish on a day-to-day basis, but it came to mind today, when I read this story. It seems that a couple of biology profs at a university in Florida had their cars vandalized because they had Darwin Fish on them. The vandals tore off the Darwin Fish, scraped off pro-evolution bumper stickers, and put nails in the tires. To make sure that the message got through, they left religious messages in the form of letters for good measure.

Now, I am not so naive as to imagine that everyone accepts the basic scientific facts of biology, nor do I imagine that universities are bastions of enlightenment where things like this can’t happen. But at the same time, it would be naive to dismiss such acts as petty pranks.

For one thing, it’s a hate crime. Imagine if Muslim symbols were torn off a vandalized car and you’ll see my point. For another, the vandals targeted professors, presumably imagining that somehow the profs might see the light and give up teaching evolution — which, as you can imagine they are not.

But any action, however small, that is deliberately designed to intimidate an academic into changing his position cannot be taken lightly. So far, these two professors don’t seem cowed, but what about the next brilliant young biologist who is offered a position at the University of Florida and thinks to do a Google search? Perhaps she thinks twice about taking that job, and they hire someone less talented. And little by little, the Floridian students of the future are deprived of the education they might have received.

Meanwhile, I’m looking for a more prominent place to display my own Darwin Fish.