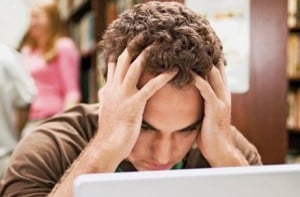 Jonathan P. describes his second year at the University of British Columbia as “very, very rough.” He had five intensive reading and writing courses in international relations, plus volunteering commitments. But as an overachiever, he felt “on top of his game.” When he fell behind at week five, the Quebec City native decided he needed to work harder. “The obvious solution, to me,” says Jonathan, 21 at the time, “was to spend less time with friends, less time doing fun stuff, and study, study, study.” By week 10, as assignments piled up, he was sleeping three hours a night. “I woke up one morning,” he says, “and I just didn’t have any taste for my studies and every day looked like it would pretty much never end.” He would call home crying. When he told his stepmom he wasn’t eating, she urged him to go to a doctor, who prescribed sleeping pills that got him through the semester. “When I was home for Christmas,” he says, “just the thought of going back to UBC, I was like, ‘Hell, no. This is not happening.’ ”

Jonathan, who does not want to use his last name, now blogs about mental health and awareness on a university website called Healthy Minds (blogs.ubc.ca/healthyminds), which was set up to reduce the stigma of mental illness, help students succeed in their studies, and signal “a culture shift at UBC that favours personal wellness.”

Mental health professionals on campuses agree anxiety, depression and other mental illnesses are on the rise. A 2010 survey of 30,000 students in the U.S. and Canada showed 84 per cent of respondents from universities and colleges (including UBC and Simon Fraser) felt “overwhelmed,” six per cent had considered suicide and one per cent had made an attempt. Robert Francks, clinical director of McGill Mental Health Services, says universities are “perfect incubators” for mental illness “as students are away from families, and may face financial worries, drug abuse and relationship problems.” Then there is the “enormous expectations about grades.” These are triggers for depression, bipolar disease, eating disorders, schizophrenia and other mental illnesses, all of which normally surface between the ages of 15 to 24.

For Jack Windeler, an 18-year-old first-year Queen’s University student from Toronto, the difficult transition to university ended in suicide in 2010, one of three confirmed suicides at the school in the last two school years.

Jack’s studies began slipping in October 2009. “He told us he was a little bit behind but was catching up,” says his father, Eric Windeler. “We were having very healthy, normal conversations about how it was going and we were getting standard answers back.”

There were signs, but the cues were missed. When he stopped handing in assignments, the teaching assistant thought he was dropping the class. Now residence dons and other Queen’s staff take mental health first aid, which involves two days of training.

Windeler started the Jack Project at Kids Help Phone, which runs a website that helps teenagers recognize mental health problems and encourages them to intervene.

Jonathan stayed home after Christmas, went into therapy, and developed what he calls a “radical self-care plan.” When he returned to UBC the next September, he followed these rules: “I would not do work past 10 p.m.,” says the student, now in fourth year. “I would go to yoga four times a week. I’d play ultimate Frisbee with my friends. And I’d take one day a week off school work entirely.” He assumed his grades would drop, but was surprised to discover that wasn’t true. “I don’t mean to brag,” he says, “but my average went up a full 10 per cent.”

One in four people between the ages of 15 and 24 will suffer a mental health problem. Here are some signs, according to the Jack Project video (thejackproject.org):

Withdrawal from friends, family and activities that used to be fun

Changes in eating or sleeping patterns, feeling tired or exhausted all the time

Thoughts or talking about death or suicide